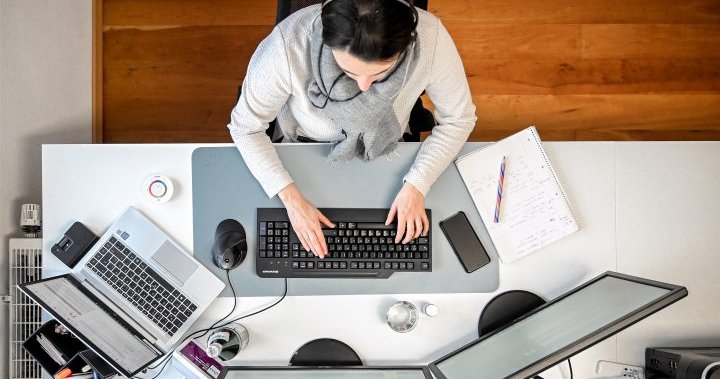 Over the past one year, the coronavirus pandemic has drastically changed our lives and the way we work.

Amid tightened restrictions and public health measures to curb the spread of COVID-19, working from home has become the new norm for many of us.

While the switch to a virtual office with meetings on Zoom, Skype or other online platforms has allowed for greater flexibility, efficiency, convenience as well as safety, experts say the lack of social interaction has also taken a mental toll on workers.

Gone are the days when you could take a coffee or cigarette break with a colleague or call a team meeting over lunch.

“Working from home for many people in our society is a risk for further alienation and feeling very lonely and distant,” said Roger McIntyre, professor of psychiatry and pharmacology at the University of Toronto.

“Going to work is not just getting a paycheque … it’s also a sense of being connected.”

McIntyre said COVID-19 has only made people more disconnected and amplified what he called the “loneliness pandemic.”

A new report published by Morneau Shepell last week found that the Mental Health Index for working Canadians dipped to a record low in December. The findings also showed declining workplace productivity, with 27 per cent of supervisors reporting that their employees were less productive than in 2019.

Overall, 36 per cent of survey respondents said they were concerned about a co-worker’s mental health, the report showed.

“There hasn’t been a clear end as we had all hoped, and we’re feeling very emotionally drained,” she told Global News in an interview.

Financial problems and uncertainty caused by the pandemic have only added to the stress.

The Canadian economy bounced back toward the end of the year, growing at an annualized pace of 40.5 per cent, after its worst three-month stretch on record.

However, the economic restrictions and physical distancing measures have caused major disruptions to Canadian businesses.

Some 63,000 jobs were lost in December, the first decline since April, according to Statistics Canada.

COVID-19 lockdowns, restrictions and physical distancing left more than half of Canadians feeling lonely or isolated, according to a recent Ipsos poll conducted exclusively for Global News.

Amid a year of job losses, social isolation and travel restrictions, another Ipsos poll in December found that 40 per cent of Canadians said they have faced mental health, addiction or alcohol issues in some form in 2020.

5:02
Author Mark Henick on the man who saved his life

Author Mark Henick on the man who saved his life

For someone who has had a history of depression and several suicide attempts, Mark Henick says his past mental health problems have actually helped him get through the pandemic.

As a teenager growing up in a broken home in Nova Scotia, Henick had tried to jump off a bridge but was saved by a stranger who pulled him off the edge.

The 33-year-old mental health advocate wrote about his struggles in a book titled So-Called Normal: A Memoir of Family, Depression, and Resilience, published earlier this month.

Read more:
Canadians working from home continue to stay ‘on the job’ while sick

He advised people not to be afraid to speak up about their problems and show empathy toward others during this difficult time.

“Pick up the phone, send a Facebook message, maybe even write an old-fashioned letter. It really could save a life,” he told Global News.

Since last year, 24 per cent of Canadians have considered leaving their current job due to their employer’s response to COVID-19, according to Morneau Shepell’s report.

Read more:
How to find a virtual therapist

Lorna Borenstein, founder of Grokker Inc. and author of the forthcoming book, It’s Personal: The Business Case for Caring, said employers need to make sure employees know that they are cared for.

“If they don’t, they will damage their business today and weaken results tomorrow,” she told Global News.

How to address mental health at work

Since May last year, the government of Ontario has offered free internet-based mental health therapy programs to help Ontarians, including front-line health care workers, experiencing anxiety and depression. This is part of the province’s $26.75 million in emergency funding for mental health and addictions services during COVID-19.

Meanwhile, Quebec announced in November that it was injecting $100 million into mental health services, including teams on the ground to work with “vulnerable clientele” and promote early intervention.

Allen said it was important to seek professional help if needed.

Both McIntyre and Allen also offered other helpful tips for people working from home:

“We can address malignant uncertainty by having deliberate implementation plans that are very well executed,” McIntyre said. “That would do a lot of good for the mental health of Canadians.”

If You’re Feeling Judged: One Thing You Need to Understand
New Barbie Doll Honours First Black Aviator — Inspires Youth to Take to the Skies (PHOTOS)
Deaf Domino’s Employee Delivers Pizzas on Foot After His Car Breaks Down – In Return, He Gets a “Tip” of $12,000
How to Show Up When Nothing About Your Life Is Perfect
The Most Heartfelt Speech About Being Your Best | Gian Paul Gonzalez | Goalcast