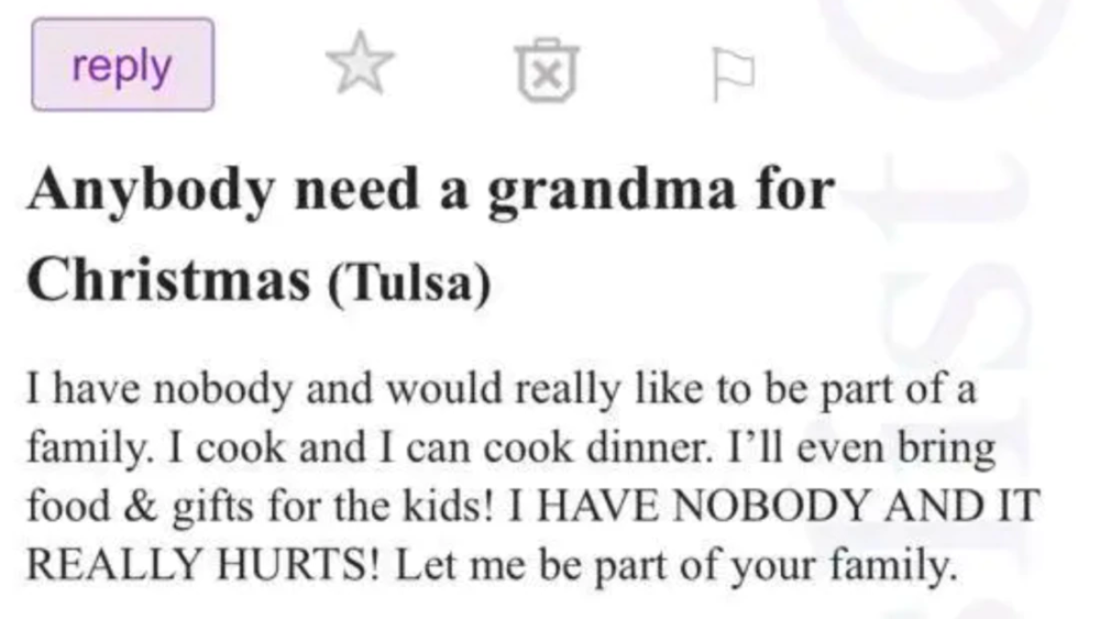 For many people, the holidays are a joyous time of being together with loved ones and friends. There are parties to attend, gifts to exchange, and Christmas dinners with all the trimmings.

But for those who are alone, the holidays can be particularly lonely.

Which is why one woman placed an ad on Craigslist offering to be a “Grandma for Christmas,” just so she wouldn’t have to spend Christmas Day alone.

Does Anybody Need a Grandma for Christmas?

The heartbreaking call out was posted on Craigslist in Tulsa, Oklahoma, and was presumably written by an elderly woman desperate not to have to spend Christmas alone.

Nestled among the ads for second-hand furniture and used cars, the mystery woman wrote, “I have nobody and would really like to be part of a family.”

In exchange, she even offered to cook dinner and bring gifts for the kids.

RELATED: Parents of 12 Kids Work Multiple Jobs to Make Ends Meet – So a Stranger Gives Them a New Van and $1,000 for Christmas

And if that doesn’t tug at your heartstrings, the next part will. She ended her post with, “I HAVE NOBODY AND IT REALLY HURTS! Let me be part of your family.”

While you’d think that people would respond in the spirit of giving, unfortunately, you’d be wrong. Sadly, it seems that there are a lot of people out there whose hearts are two sizes too small. Rather than shower her with love, they instead, pummeled her with hate.

Response to the Lonely Woman’s Ad was Swift and Cruel

Many took issue with the lonely woman’s plea and sent her hateful messages, calling her a “parasite” and accusing her of trying to prey on families. One person went so far as to tell her to “go kill” herself.

The horrific responses prompted her to write an update: “I pour my heart out and really messed up messages! Hope it makes you feel good! I’m not asking for anything! I’m will[ing] to give and [you] act like I’m trying to take! Thanks for that extra shot of pain! Holidays are hard enough!!”

RELATED: Struggling Parents Work Overtime to Provide for Kids – Their Son Blindfolds and Leaves Them Speechless for This Reason

She added a second update saying she’d “figure it out, thanks,” before ultimately deleting the post. But not before it was seen by 21-year-old Carson Carlock.

Knowing the pain of loneliness after losing his mom to colon cancer the previous year, he made it his mission to grant the lonely woman’s Christmas wish.

Carson took a screenshot of the Craigslist ad and posted it on Facebook with the hashtag “FINDGRANDMA.”

Carson’s post immediately took off, with thousands of people offering to help. However, it seemed that grandma was nowhere to be found.

Carson refused to give up hope. He gave interviews to local news stations, pleading for her to reach out to him. He also sent an email to her Craigslist account, writing: “I simply just want to help you find a family. You won’t be alone this Christmas.”

His determination paid off. “Grandma” was found.

The woman, who asked to be identified as “Carrie,” responded to Carson via email and they met up just a few days later.

RELATED: 21-Year-Old Receives His First Paycheck – Uses It to Completely Pay Off His Parents’ Mortgage for Christmas

“When she saw me she burst into tears and said, “Come here,” Carson told the NY Times. “It was a big, big hug, a very big hug,” he said.

He also revealed that Carrie, who was in her mid-50s, was battling stage 4 cancer. Estranged from her daughter and granddaughter and broken-hearted, she posted the ad out of sheer desperation.

“I don’t want anybody to feel the way I felt,” Carrie said. “Most of us just want the feeling of love and belonging.”

Carrie got her wish; she ended up spending Christmas with friends. And, she made a few new ones as well. She told the Times that numerous people reached out to her, longing for connection and family.

As we get caught up in the hustle and bustle of the season it can be easy to forget that not everyone has someone to share the holidays with. Her ad is a poignant reminder to all of us to open our hearts and our homes to those who are isolated and alone.

Giving someone the gift of belonging truly is one of the greatest gifts we can give, and not just at Christmas time, but all year too.

Struggling Single Mom Is Summoned to Courtroom – Judge Issues Her a $350 Fine but Then Changes His Mind
Parents issue warning after teen dies from inhaling aerosol deodorant
This Is What Self-Care Really Means, Because It’s Not All Salt Baths And Chocolate Cake
How to Un-Stub Your Toe on the Nail of Life | Eric Bailey Motivational Speech | Goalcast
‘Gen Z yellow’: Next ‘it’ colour or marketing ploy?