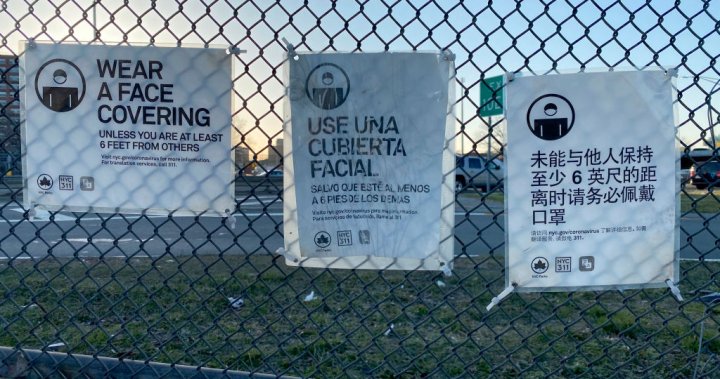 Mark Lee is a simplified and traditional Chinese translator from Richmond, B.C., who has aided in translating COVID-19 information to seniors during the pandemic.

Even prior to COVID-19, there was already a high demand for translation aid in Vancouver’s Chinatown — seniors needed medical appointments translated, for example.

“Once COVID hit… We already had that understanding that this was something people needed,” he said.

Lee is also a member of C19 Response Coalition, a group that has continued to aid in translating material to Vietnamese, Tagalog and Chinese dialects with the support of federal COVID-19 grants.

He says he understands allocating the grants to grassroots groups working on the ground, but when these groups are already spread thin and don’t have the resources to make the system change, it’s more of a “band-aid solution.”

“They’re giving us money, and we’re having to build a parallel system,” he says, adding that if it’s not going to be integrated at a federal level, it feels like there is no point.

“Essentially we’re doing their job, but at a lower rate, and without any of the types of resources that they have access to. It’s really frustrating.”

The lack of multilingual, culturally competent resources available to racialized communities has been a historic and ongoing issue that has only been exacerbated amid the flood of COVID-19 information, and advocates are calling for increased support.

In March, the Canadian federal government presented the Vaccine Community Innovation Challenge, aimed at encouraging individuals and/or groups to propose a campaign “to help promote vaccine confidence in their communities.” 20 finalists are expected to reach receive $25,000 for their proposals with one receiving a grand prize of $100,000.

Amy Yee is a member of Ottawa’s Chinese Canadian Collective (CCC), a non-profit organization dedicated to examining Chinese Canadian experiences, issues and representation. The CCC was one organization that received an email from the Federal Anti-Racism Secretariat on submitting a proposal.

But Yee says the challenge is problematic, as creating a proposal in such a short window, on top of loaded tasks advocacy groups are already facing during this tumultuous time, only creates more work for them.

“This whole year we’ve just been chasing things, and if the government had a structure beforehand, this wouldn’t have happened,” says Yee, adding the initiative itself is late considering the pandemic has been happening for over a year.

Prior to COVID-19, Yee says the CCC was already advocating in Ottawa for translation resources in places like recreation centres, where people encountered difficulty in understanding things like changes in scheduling.

Advocacy groups have pushed for language access for decades and if officials don’t take action, groups can only do so much, Yee adds.

“We’re actually very new to this fight. But when you look at the history, it’s nothing new. History is repeating itself and it’s being erased and wiped from public memory,” she says.

Lee adds health authorities are not culturally aware, and there’s a lack of understanding in navigating communication with racialized communities who don’t speak English.

He points to an example of him and his group reaching out to authorities ahead of time to ask what their plan was to aid seniors in Vancouver’s Chinatown.

“Then they have a pop-up clinic and they didn’t tell anybody about it,” he says.

He says he and his group ended up frazzled the day before, knocking on elderly neighbours’ doors to translate information to them and bring them to the clinic.

Lee adds being on the ground and doing work for these communities has been traumatic.

“Through this person being oppressed, you are now experiencing it as if you were them, because you have to relay their information… You’re their voice, you’re their ears,” he says.

In September 2020, CASSA introduced a COVID-19 helpline to provide live and recorded information on health and safety, government benefits, vaccinations and more in Urdu, Hindi, Tamil, Bangla and Punjabi.

“Our goal through that helpline was to support people that have technology barriers and language barriers,” Hasan says, adding that CASSA has received calls of help from different groups, including seniors, international students and women seeking support in domestic abuse situations.

In addition to the helpline, CASSA also started creating videos and infographics about COVID-19 relief, debunking myths and more.

“There’s a lot of misinformation about the virus and vaccines floating around on social media and communication apps like WhatsApp,” she says.

“(We’re) creating content that targets misinformation and provides accurate and real information to people so that can make informed decisions.”

Hasan also points to partnerships CASSA has with member agencies like Punjabi Community Health Services and the Tamil Canadian Centre for Civic Action, which have been doing a lot of work on the ground.

CASSA says there has been a lot of frustration in the communities they serve, especially in terms of understanding COVID-19 information, which is rapidly changing and usually in English.

“We’ve been hearing a lot of South Asian seniors that are trying to get vaccinated… having a lot of trouble accessing the system,” says Hasan.

Hasan says websites are in English and often involve navigating multiple windows before ending up in a waiting space. Even younger, more tech-savvy people are having trouble booking appointments, she says, so it’s even more difficult for people with technological and language barriers.

“That accessibility piece is huge. And we’re getting a lot of people providing us feedback that they don’t understand how that system works,” she says. “South Asian communities have some of the highest rates of COVID-19, along with other racialized communities, and so I think there could have been a lot more done to support those communities earlier on.”

There could have been a lot more resources when those trends began to help racialized communities come out of the pandemic stronger, but many of the initiatives now are coming in sporadically and late, adds Hasan.

Rufaida Mohammed, co-chair of the Canadian Muslim COVID-19 Task Force, says the group has partnered with other organizations to help deliver information through hosting events and webinars, as well as developing multilingual COVID-19 resources accessible to Muslim communities.

Additionally, the group has been working with Toronto Public Health and Peel Public Health to build connections in hot spots that the health units didn’t have before.

Forming alliances with other organizations has also allowed the group to readily share its multilingual resources and material, says Mohammed.

“The task at hand is to make sure that people in the red zones get access to these clinics,” she says, adding that this may look like recruiting translators to be present at mosques, for example.

She says the group has also aimed to ensure cultural acuity and considerations are in place about fasting and Ramadan, and that there are multilingual Muslim doctors at these vaccination sites if someone feels ill after a dose.

For the second time during COVID-19, Muslim communities are experiencing one of their holiest months when they fast.

“The Muslim world is doing this right now, and fighting a pandemic and having loved ones that are not well, having extreme amounts of loss of social status, loss of financial stability, loss of identity,” she says.

Mohammed says she finds this Ramadan has been a deep reflection of not only the pandemic, but also inwardly who the community is as a nation.

“We give up a lot of things just to be more inwardly present spiritually. And that’s the resilience, that’s being developed within us as the days go by,” she says.

“That is a parallel for us with the lockdown. And it’s been a deeply reflective and a deeply spiritual one for a lot of Muslim-Canadians. And it’s even through this month that we find greater strength to withstand the pandemic.”

Working towards language accessibility has a lot of layers, Lee says, but one way to implement better support is having staff who have language competency. While there are racialized staff in offices, Lee emphasizes it’s important to not lay the extra burden of translating on them.

“It’s not in their job description to be the token Punjabi speaker… It’s not fair to them and they don’t get paid extra to do the type of work that falls on them,” he says.

Lee says government officials and health authorities reaching out to multilingual media outlets to ask for their help in disseminating information could also aid in building connections.

Like Lee, advocates emphasize the importance of continuing to foster working relationships with groups that are already established in the communities that government officials are targeting.

Mohammed says reaching out to shelters, food banks, immigration and cultural centres can help in disseminating information on accessing vaccine clinics and necessary information to populations who may not be digitally literate.

“And for multi-generational homes, a cultural piece is that there’s a dependency on younger members of the family to really look after the elderly,” she says.

“We know that a lot of those younger members are precarious workers trying to do their part to sustain the family,” she says, adding that increased support for this could look like recruiting volunteers to aid in vaccine bookings.

Looking at health and socioeconomic disparities, as well as factors like location and computer literacy, can help identify what determines one’s ability to access these resources and how we can fill those gaps, Mohammed adds.

Similarly, Hasan says it is essential to look into how funding and resources are being distributed.

“I think what we need to get past is this colonial way of distributing funds to community organizations,” she says.

She says when money is passed on to smaller organizations to do translations and community work, they’re expected to work off of pennies.

Hasan says moving forward, it is important to look at what has been the most effective in supporting racialized communities.

She points to grassroots groups, volunteer groups, COVID-19 relief groups and more who have been doing work with little to no funding.

“(They’ve) really connected to the community, have trust with the community and are on the ground literally talking to people, whether it’s about benefits, helping them sign up or register for their appointments,” she says.

It’s time to look at who is really supporting the best interests of these communities, Hasan says, adding that large multi-million-dollar organizations don’t have the trust or full knowledge of what they need.

“Going to people that have all that knowledge have all that trust, and giving them the resources is building their capacity to serve the community,” says Hasan.

“As opposed to doing things like the way that they’ve been done for many years and, frankly, failing in a lot of aspects.”

Struggling Single Mom Is Summoned to Courtroom – Judge Issues Her a $350 Fine but Then Changes His Mind
How to Make Things Better When It Seems Like Everything Is Going Wrong
It Takes One Person To Make You Feel Like You Matter | Kyle Scheele Inspirational Speech | Goalcast
Domino’s Employee Delivers a $12 Order – But the Unusual Tip He Received in Return Takes Him by Surprise
Beyond Dry January: 5 Benefits of Extending Your Break from Alcohol