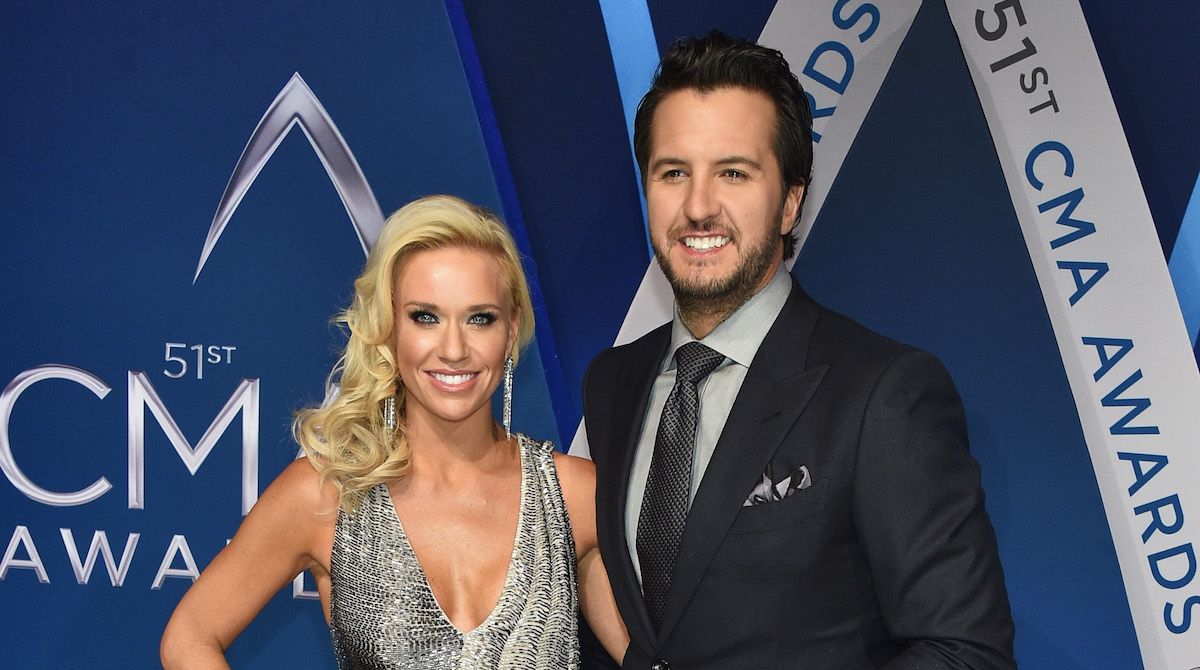 Luke Bryan and Caroline Boyer have been married for nearly 15 years, but although their love story may appear to be picture-perfect, it’s been anything but. The truth is that the couple’s relationship is as real as it gets, which makes it all the more inspiring. Over the years, the country superstar and his leading lady have had to work through doubts, breakups, and tremendous loss — all of which have resulted in an unshakeable union.

Here’s what we can learn from Luke Bryan and Caroline Boyer’s imperfect love story:

Luke Bryan and Caroline Boyer first met at Georgia Southern University when the future CMA Entertainer of the Year was a senior and she was just a freshman. It was the fall of 1998 and, as Bryan told HuffPost, he first laid eyes on his future wife “at a little bar called Dingus Magee’s in Statesboro, Georgia.”

As he admitted to The Boot, it was pretty much love at first sight — “It took me eight seconds to figure it out” — although he did need little liquid courage. “I had to drink a lot before I could go talk to her, but I did,” he admitted. “Somehow I managed to ease over there and somewhat be charming,” he continued, revealing he was instantly drawn to Boyer. “It was one of those situations for me, it was like, ‘Who is that and how do I go talk to her? And, yep, I’m going to marry that girl,’” he recalled. Speaking with Good Housekeeping, he gushed:

It was love at first sight with Caroline — those blue eyes of hers. I knew that, no matter what, I was going to make my way over to her.

As for Boyer, she didn’t feel as strongly — at least not at first. It was her first week in college and her first time inside a bar and Bryan’s forwardness almost scared her off. As she told the Get Real With Caroline Hobby podcast, “He’s such a big personality that I was just staring at him, like, ‘Is this guy for real?’”

She soon learned that he was for real — “It is not fake, it is totally real, she said” — but once she was ready to pursue something more, it was Bryan’s turn to get cold feet. Despite his strong attraction to Boyer, the country crooner didn’t let her know how he felt until she made her feelings clear. As she told People:

We hung out as friends first and he never made a move on me. I kissed him first! He was always so scared of making a girl feel uncomfortable, he wouldn’t cross a line.

Luke Bryan and Caroline Boyer may have been college sweethearts, but like any couple will know, growing up together sometimes means growing apart. And so, when it was time for Bryan to graduate, they decided to call it quits.

“She was three years younger than me in college [and] I was about done with school when we met, so I kinda went off and did my thing in Nashville,” Bryan told HuffPost. Meanwhile, “she finished up her college experience and it kinda allowed us to both go get our feet a little firmer on the ground.”

Opening up about the end of their college romance, Caroline told Get Real With Caroline Hobby that a big reason why it didn’t work out the first time was that they simply weren’t on the same page. “I got freaked out because he was talking about marriage,” she recalled and so, she broke up with Bryan after a year and a half of dating. Admitting that the breakup “was horrible,” she revealed that she eventually moved on and had two other serious boyfriends before she found her way back to Bryan. This time, they would be perfectly aligned.

The right timing can make or break a union

It would be five and a half years before Luke Bryan and Caroline Boyer would reunite. As Boyer recalled, her brother had kept in touch with Bryan and while she was visiting him, he told her that Bryan was scheduled to play a show.

I said, ‘Okay, I’ll go for like an hour.’ I saw him playing, and something was different. We were older.

A miscommunication would threaten a possible reconciliation, however. When Bryan took a break and didn’t approach Boyer, she assumed he was avoiding her and went home. This time, unlike in their initial courtship, Bryan did speak up. He called her brother’s house at 3 a.m. to ask why she had left. “After that we started texting, and we saw each other at Christmas, and we’ve been together ever since,” she said.

Speaking about that fateful night, Bryan told HuffPost, “I was playing a little bar in Statesboro and she just happened to kinda be in town. We kinda saw each other and talked a little bit and then started emailing back and forth a little bit,” he said.

And she was like, ‘Hey, you want to come to my family’s Christmas party?’ I went to the party and the rest is history.

Opposites attract but a shared foundation is key

Asked why he thinks he and Boyer are such a good match, Bryan told The Boot in 2013 that having a similar upbringing and shared values has played a key role. “We grew up in good-timing families, and when I say good-timing, our family environments were always kind of the nucleus environment,” he said, explaining that both he and Boyer were used to “people coming in and out of [the] house” their entire young lives.

But as similar as they may be, they’re also perfect opposites. While Bryan chased his dreams, Boyer was happy to stay out of the spotlight and build her own career, then focus on their growing family. As the “Country Girl” singer told The Boot in 2015, his wife is “the perfect kind of stability that I need on all levels.”

A blissful union requires communication — lots of it

Luke Bryan and Caroline Boyer finally said “I do” in December 2006 — “I married my best friend,” Bryan gushed — and they’ve been together ever since. Asked about the secret to their wedded bliss, Bryan told The Boot, “We have a normal marriage. We get into it, we fight, we figure it out, but at the end of the day, we understand that there’s a lot of stuff that comes at us that makes us all crazy, too, so we just try to be normal and enjoy the ride of this.”

Speaking with Good Housekeeping, he highlighted just how important communication has been to their success. “We don’t have big throwdown fights,” he noted. “If we have beef, we always talk it out instead of letting it snowball.” They also make time to communicate without kids — “We have coffee in the morning, just Caroline and me; It’s my favorite time of the day” — and make it a point to do special things for one another to keep the spark alive.

“One Valentine’s Day, we got each other’s initials tattooed on our ring fingers,” he told the mag. Then there’s the fact that “every night before bed, I rub my wife’s feet. She says they’re the best foot rubs on Earth,” he laughed. Equally romantic was when, to celebrate their 10-year wedding anniversary in 2016, Bryan gave his wife a (huge) new diamond engagement ring, joking to People, “10 years with me feels like a thousand. It was certainly the least I could do!”

When times are tough, rely on each other

Over the years, Luke Bryan and Caroline Boyer’s bond has been put to the test on a number of occasions.

Following their five and a half years apart, when the pair finally got back together, Bryan was in the midst of pursuing his musical dreams and Boyer had to decide if she was willing to be there for him. Luckily, she was. As Bryan revealed, “When we got married, her career supported me when I was making about $10,000 a year. She was the one bringing in the dough.”

Boyer was also there for her partner when his sister, Kelly, suddenly passed away in 2007. (Bryan had already experienced great tragedy when his brother Chris died in a car accident in 1996.) Then, in 2014, Kelly’s widower, Ben Cheshire (Bryan’s brother-in-law), died, leaving behind the couple’s three kids, son Til and daughters Jordan and Kris.

Bryan and Boyer (who had son Thomas “Bo” Boyer in 2008 and his brother, Tatum Christopher, in 2010) immediately knew what they had to do: they took in Kelly and Ben’s children. “We never thought twice about it,” Boyer said of their decision. “You know, it was never something that he and I had to sit down and talk about […] We just did that.” As Bryan told Billboard, “You don’t want to sound like you love having them so much that you’re glad it’s the situation, but we’re honored to be doing what we feel was the right thing.”

Nothing in life is perfect and the same is (especially) true about relationships. Luke Bryan and Caroline Boyer have always been real with themselves and each other when it comes to love. Recognizing that the timing was off in college, they went their separate ways instead of forcing a connection.

This allowed them to grow as individuals, so when chance brought them back together again, they were equipped for the road ahead. Their journey has certainly had its ups and downs, but it’s the imperfect moments and bumps in the road — and the way a couple chooses to deal with them — that really makes or breaks a relationship. In the case of Bryan and Boyer, their honest approach to love (and plenty of communication) has made their union unbreakable.

He Was Fatally Beaten by Memphis Police — Now People Around the World Are Sharing #SunsetsForTyre in His Honor
How I Stopped Feeling Embarrassed and Ashamed of Being Single
If You’re Feeling Judged: One Thing You Need to Understand
Podcast: What to know about “novelty hunting.”
‘It was my heart’: Women with heart disease face barriers to care in Canada, report says