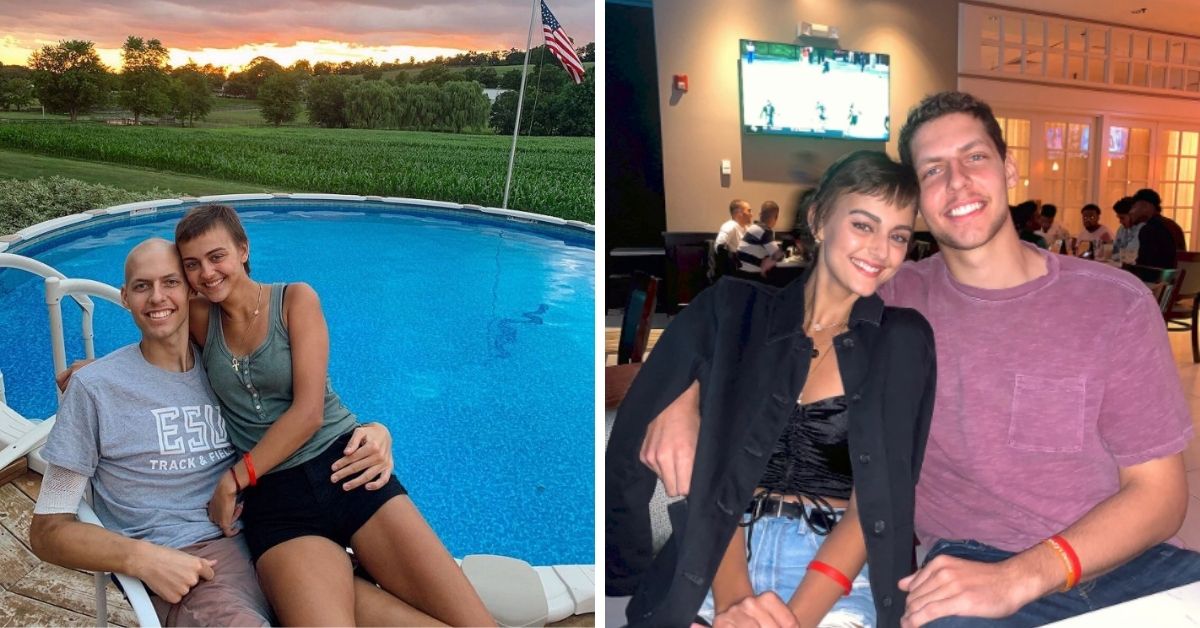 Molly Gorczyca and Ryan Smith recently took part in Twitter’s “how it started/how it’s going” game by sharing the progression of their relationship over the last year.

The twist? Molly found out Ryan was battling the same cancer she had been diagnosed with. What started as a simple text to her friend ended up being an unexpected love story between two brave people.

How it started: two strangers at the hospital

The Twitter “how it started/how it’s going” trend works by sharing the beginning stage of a goal/relationship/situation accompanied by an update detailing the current situation, or “how it is going.” The trend gained traction and many people started taking part, showing their journey towards their dream job, weight loss, relationship etc.

When Molly posted her story, she never anticipated that it would go viral.

“I could never have anticipated that,” Gorczyca told People magazine of her tweet, which has since received over 1 million likes.

I feel like, especially when we tell our story, people think there’s no way something good could come out of something so terrible… I think that’s kind of why a lot of people started to like it.

In April of 2019, Molly, who is from Hackettstown, New Jersey, was diagnosed with acute myeloid leukemia (AML), a type of cancer that affects the bone marrow and blood. Four months later, Ryan was also diagnosed with AML.

Previous to their diagnoses, both were healthy collegiate athletes.

“It’s a very rare cancer and it doesn’t typically happen in people who are 20, 21 years old,” Molly explains.

While AML is considered rare before the age of 45 and usually affects adults at an average age of 68, according to the American Cancer Society, it can happen to those who are much younger.

Molly and Ryan’s meeting was fated. Through an accidental article, she learned that someone else who was her age, was also dealing with the same condition. The fact that they had this same, rare disease in common pushed her to reach out to him, back in October 2019.

“A girl from my high school who goes to Ryan’s college retweeted an article about a ‘basketball warrior battling cancer,’” she recalls. “I started reading it and learned how Ryan was the same age as me, also a collegiate athlete and was battling the same exact cancer. When I saw that I was like, ‘I have to reach out.”

In her tweet, Molly included a screenshot of the fateful text she sent her friend.

The text reads: “There’s a boy my age with the same cancer in the hospital right next to me… imma date him.” Even though it may sound like it, Molly admits that “it wasn’t a romantic thing at first.”

It was more in a joking manner like, ‘Oh my gosh, he’s so cute and a basketball player and he’s my age… Imagine if I dated him.’ I never thought I would actually end up dating him!

“It was more just as a person going through the same thing. I’ve always thought it was a nice thing to reach out to people that I find and offer some support if they need and we can just be there for each other,” continues Molly, who underwent a successful bone marrow transplant at the end of October 2019.

Their love bloomed in the most unlikely place

Ryan and Molly quickly developed a friendship. But his mom had other ideas.

“Just kind of looking through her Instagram and
everything, my mom is like, ‘Ryan, she’s really pretty. Talk to her,’”
recalls Smith. “I was like, ‘I kind of agree with her.’”

“Everybody sees cancer as this looming, terrible disease and nothing good comes from it. But if something like our relationship and both of us beating cancer comes from that, it’s kind of like a flower that’s growing between the concrete,” said Smith.

Eventually, the pair met in person while Molly was at the hospital. It wasn’t until they were both discharged that they made their relationship official.

It was right before I went in for my transplant. I decided to ask her if she wanted to start dating because a month away [from Molly in isolation, ahead of my transplant] was tough.

“But when it was my transplant date, she drove down to Philadelphia and she waved a sign outside my room and said, ‘Happy Transplant Day,’” Ryan continues. “That was just really special.”

Though they met because they were diagnosed with the same cancer, that’s not the reason Molly and Ryan are so great together.

“We have an overwhelming amount of similarities.
The way we met is not even some of the biggest things that we have in
common,” Smith shares. “We can relate to each other, but we are both
athletes, we’re both driven, we’re both hard-working.”

On her end, Molly adds: “It’s a great connection, but we really try to emphasize it’s what brought us together and it’s how we met, but it’s not our relationship. We’re not the cancer couple. We’re a great couple and we just happened to meet through something like that.”

Their love touched countless people across the world

And after their story came out on Twitter, they learned many
others had connected in similar ways.

“I never would’ve expected to get such genuine support and love from people that we’ve never met before. It’s been a beautiful thing,” Molly continued. “People are just so kind for reaching out to us and wishing us well… those things have meant so much.”

Love can always bloom from tragedy

Now, both are doing well after their respective transplant and the future feels bright. “She’s been just overwhelmingly straight up and loving to me,” Ryan says of his girlfriend.

“Ryan and I have this connection that I’ve never had with anybody,” Molly shares. “It’s full of love and he’s somebody who, no matter what I’m going through, is always there in my corner supporting me, understanding me and rooting for me 24/7, no matter what.”

“Having somebody like him in my life now, he’s just a great guy,” she adds. “It’s amazing that we get to be in a relationship and he makes me really happy.”

Ryan and Molly want the world to know that cancer is not the end-all of their lives. Their story is proof that life doesn’t have to stop when you are dealing with something difficult.

“Everybody sees cancer as this looming, terrible disease and nothing good comes from it. But if something like our relationship and both of us beating cancer comes from that, it’s kind of like a flower that’s growing between the concrete,” Ryan beautifully said.

The Walt Disney Company to mark 100th anniversary with new experiences
Quordle: Hit Wordle-style game finds B-U-Y-E-R in Merriam-Webster
7 Ways Childhood Trauma Shows Up in Your Romantic Relationships
How to balance social expectations and your budget amid inflation: ‘It’s OK to say no’
Struggling Single Mom Is Summoned to Courtroom – Judge Issues Her a $350 Fine but Then Changes His Mind