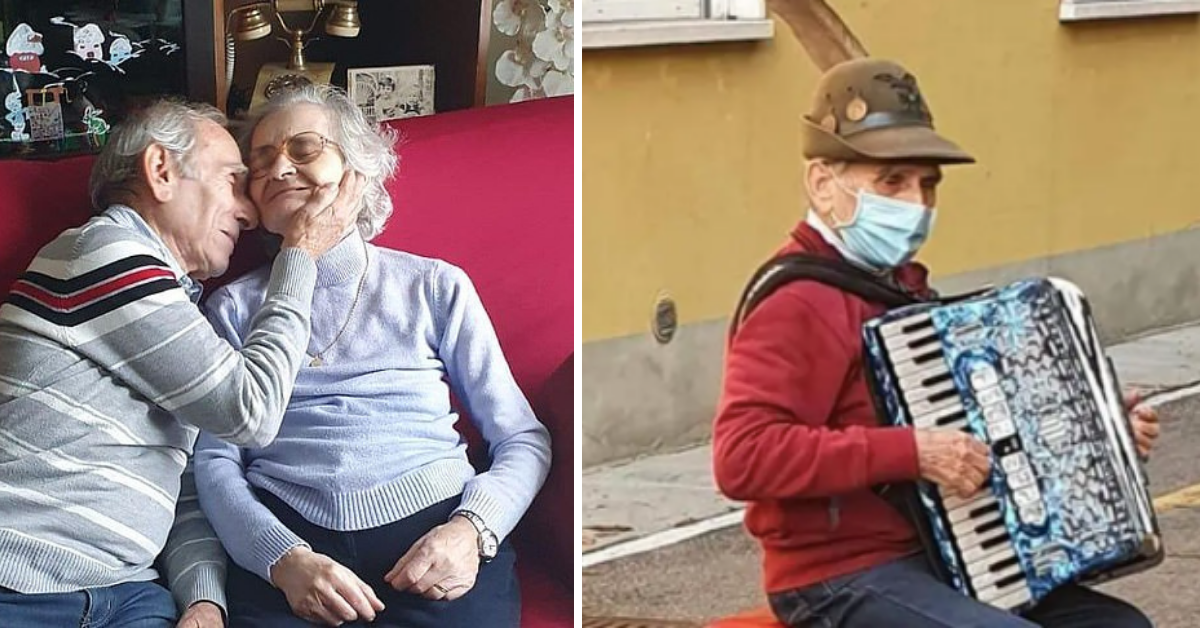 Coronavirus is a terrible thief. It has not only stolen the lives of nearly 1.5 million people worldwide, but it has also prevented people from saying goodbye to loved ones at their bedside.

Still, that didn’t stop Stefano Bozzini, an 81-year-old Italian man in the Italian town of Castel San Giovanni, from serenading his wife of 47 years with love songs from the street.

He sang her love songs

In a video captured a month ago by Maurizio Bozzini, Stefano’s son, and later posted to Facebook, the octogenarian is seen with his accordion singing love songs from the street.

Inside the hospital he is in front of, his wife, Carla Sacchi, is dying from an illness unrelated to Covid-19, but Bozzini wasn’t allowed in due to Italy’s coronavirus restrictions.

The New York Times reports that Bozzini played a few of his wife’s favorite songs, including the 1965 Bert Kaempfert classic, “Spanish Eyes.”

Bozzini called his wife Stella Alpina, a term of affection as well as the Italian name for the edelweiss flower, said Alessandro Stragliati, the leader of the local Alpini branch.

Alpinis are members of the Italian army’s mountain infantry and Bozzini would play songs at veteran gatherings as well as nursing homes with his wife at his side as she became ill, “to distract her,” Stragliati added.

A few weeks later, Sacchi died at home at 74, and was buried on November 28.

“Stefano told me, I have lost my Stella Alpina… He is a humble and simple man, but he has touched the heart of millions.”

Songs heard around the world

As coronavirus continues to ravage the planet, the video of Bozzini singing for his wife has warmed the hearts of many, including Patrizia Barbieri, the mayor of the nearby town of Piacenza.

In a heartfelt Facebook post, she thanked Bozzini for reminding us “what loving each other means” and said the notes of his accordion “will always resound like an echo of hope in this difficult year.”

“With deep respect for his pain, we feel close to [Bozzini] because his music that evening was a caress for [Sacchi], but somehow it reached each of us,” she added.

A glimmer of hope

The Covid-19 pandemic has made 2020 one of the worst years in living memory, but it has also given us plenty of reason to feel grateful. We still have love. We still have music. We still have creativity, perseverance and hope.

Soon, coronavirus will begin to decline and we will be able to embrace our dying loved ones again. Until then, we mustn’t lose our humanity — and Bozzini’s songs have been a poignant reminder of that.

The World’s Best Blind Mountain Biker | Brian Bushway | #shorts
Woman Realizes the Homeless Man She Bumped Into Is Her Childhood Friend – Does Everything to Get Him Back on His Feet
Tough Times Don’t Last (Official Music Video) Fearless Motivation
If You’re Feeling Judged: One Thing You Need to Understand
How To Find True Happiness | David Meltzer Inspirational Speech | Goalcast