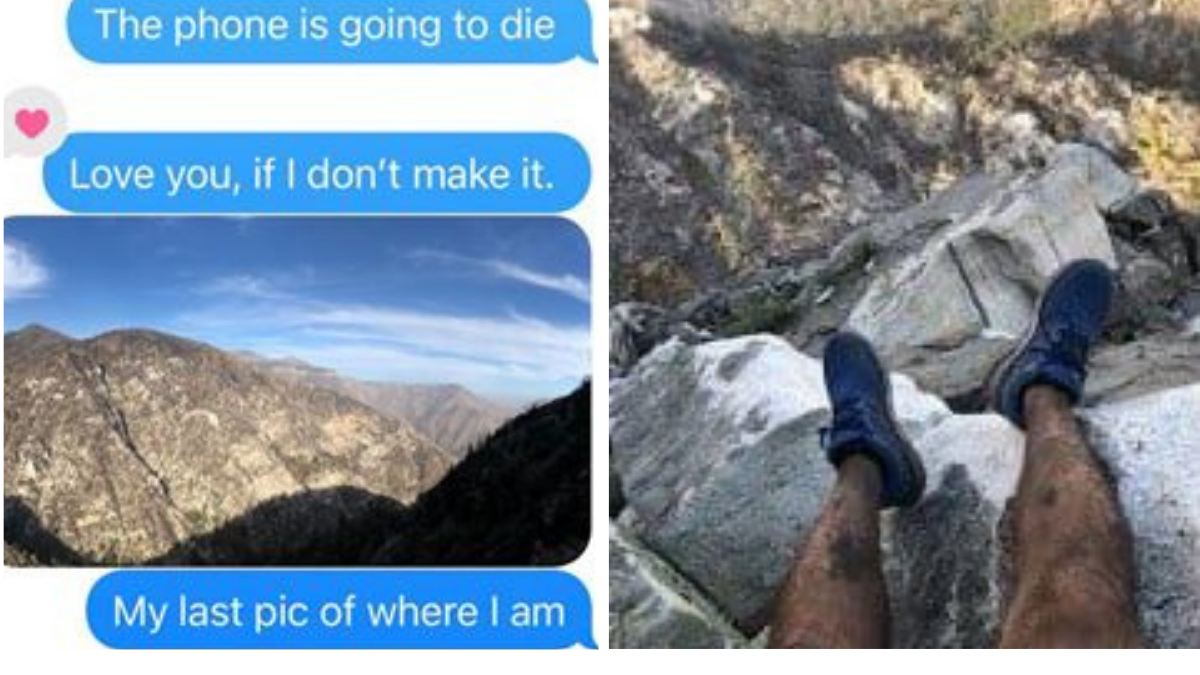 A short hike turned into more than 24 hours of terror for a California man, but a stranger with peculiar hobbies managed to pinpoint the hiker’s location using satellite information and alerted rescuers.

Lost in the wilderness

When Rene Compean went to his favorite place to hike — Angeles National Forest in Los Angeles County — he didn’t plan to be there long. The 45-year-old only planned a two-hour hike, but soon found himself out there for hours, off the trail, lost and unprepared — he had no flashlight, no paper trail maps, and only a liter of water.

As nighttime cold temperatures approached and the wind started to pick up, Compean climbed up to a peak where he could get one bar of signal and sent a text to a friend saying he needed help. He also sent a photo, hoping rescuers would be able to use it to locate him, but he forgot he had turned off geotagging location services on his phone.

It was Compean’s last message before his phone battery ran out.

A stranger with strange hobbies

After a day of searching, rescuers had no luck locating Compean so they turned to the public for help by tweeting out the photo.

“Are You an Avid Hiker in the Mt. Waterman Area? #LASD SAR Teams need help locating a #missing hiker,” the tweet read.

Are You an Avid Hiker in the Mt. Waterman Area? #LASD SAR Teams need help locating a #missing hiker. He sent this picture to a friend. His car was found near Buckhorn Campground/Trailhead. Call us if you recognize the area pictured below 818-248-3464. https://t.co/Xi0VL6Mxfi pic.twitter.com/1lUMrgj4y9

Ben Kuo, 47, was working from home when he saw the image of the lost hiker sitting atop a mountain with his legs covered in dirt.

By chance, Kuo’s hobby was to alert the public through his Twitter account about natural disasters like wildfires, which involved studying satellite imagery. He also loved figuring out where photos were taken.

“There’s an amazing amount of information you can get from satellites,” Kuo told The Washington Post.

So he punched in the time and date of the photo into Google Earth to see where Compean might have been. Incredibly, the satellite images matched the hiker’s photo and Kuo alerted authorities.

More than 24 hours after Compean went missing, a helicopter arrived and managed to pinpoint him less than a mile from where he’d taken the photo. When they pulled him up to safety, one of the rescuers passed him a note that said, “You’re so lucky.”

“Ben’s help allowed us to get to that location much sooner than we probably would have,” Gilbert told The Post. “It made a gigantic difference in us finding him.”

Kuo was happy the hiker was found, too. “It was very gratifying that he was saved,” he said. “If you have information that could help save somebody, that’s something worth sharing.”

As for Compean, he was terrified during his night in the mountains but said rescuers got to him just in time.

“I didn’t want to give up,” he said, adding that he kept trying to climb higher to make himself more visible. “I didn’t know if I would have made it another day there because I probably would have fallen trying to get to a higher peak.”

Soon after he’d made it to safety, Compean and Kuo arranged a Zoom call. “I owe you my life,” adding that they plan ned to meet in person for a meal, or maybe even to go for a hike.

“I’m so lucky that Ben did what he did,” Compean concluded. “I’m thankful to be alive.”

The kindness of strangers

Besides reinforcing that you should always be prepared when going for a hike, the lesson here is that there are kind people out there willing to help. Kuo didn’t need to go out of his way to help rescuers locate the hiker — I’m sure he had plenty of other things to do. But he did and probably saved another man’s life.

Uber Driver Donates a Kidney to His Passenger – Here’s Why He Insists It’s Not a Coincidence
Haute couture goes ‘surreal’ and upside-down at Paris fashion show
Deliveryman Arrives to Pick Up an Order From a Bakery – Breaks Down When He Finds Out Why His Own Name Is on the Package
This Is What Self-Care Really Means, Because It’s Not All Salt Baths And Chocolate Cake
It Takes One Person To Make You Feel Like You Matter | Kyle Scheele Inspirational Speech | Goalcast