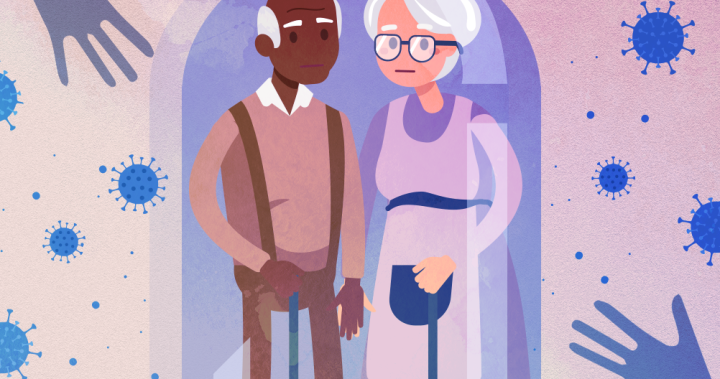 Maria Sardelis moved into a retirement home in Ottawa last October to take care of her 98-year-old mother.

Her mother was diagnosed with COVID-19 and for two weeks, Sardelis would take her blood pressure, feed her and give her medication left by the door.

Read more:
Alone and Apart — Canadians are feeling lonelier than ever

With Sardelis taking on the role of a nurse, other residents and staff were less likely to get infected, she says.

“What would happen if I wasn’t (there)? What’s happening to all those other people that don’t have someone?” she says.

“It is so heart-wrenching to watch these people — how lonely they are.”

Seniors were lonely long before the COVID-19 pandemic, experts say, but isolation and ageism may have exacerbated the problem.

The pandemic now means seniors can’t connect with friends or family members, whether that be seniors in independent living situations or in care facilities.

“While we are so busy trying to protect (seniors) from COVID(-19), they might end up dying of isolation and loneliness,” Dr. Samir Sinha, the director of Health Policy Research for the National Institute on Ageing, previously told Global News.

3:32
Managing seniors’ isolation in a pandemic

According to a recent Ipsos poll conducted exclusively for Global News, 47 per cent of people aged 55 and above feel lonely from physical and social distancing — up 14 percentage points since last November.

Additionally, 21 per cent of people in the same age group report their mental health has gotten worse over winter months.

Loneliness is also linked to higher mortality rates for people aged 65 or older, according to a Statistics Canada health report released last June.

0:55
Over half of Canadians feeling increased stress, anxiety due to COVID-19: Ipsos poll

Over half of Canadians feeling increased stress, anxiety due to COVID-19: Ipsos poll

The report found some seniors felt lonely because of ill health, the transition to retirement, the loss of a spouse or family member, mobility problems, low income, or vision and hearing loss.

Ageism can also contribute to feelings of loneliness or isolation — prevalent during the pandemic — says Andrew Wister, the director of the Gerontology Research Centre at Simon Fraser University in B.C.

“There was a lot of news out there percolating that (COVID-19) is an older person’s disease,” says Wister.

Additionally, Wister says the fear around seniors’ greater susceptibility to the virus and its severe outcomes can result in isolation.

Bill VanGorder, the chief operating officer at the Canadian Association for Retired Persons (CARP), says ageism during COVID-19 — although meant to be protective and well-intended — has made people treat older adults differently.

“As if they’re incapable of making their own decisions. As if they have special needs, whether they do or not.”

VanGorder adds that seniors outside of long-term care are also isolated because they can’t have the same social interactions as they did before.

VanGorder says younger family members who would go to their grandparents’ place to help around the house are now cautious about visiting because of the risk of transmission.


Seniors in independent living and resiliency in aging

The repetition of “stay at home” messaging has been geared especially towards seniors in an attempt to protect the most vulnerable citizens.

Eva Farkas, a 75-year-old Toronto resident, says being confined to her apartment is like being in a “luxury prison.”

“It’s really a very demoralizing thing to be locked in and to be alone,” she says.

Farkas says before the pandemic, she used to go to concerts, live theatre and meet friends for dinner.

Now, she says if it weren’t for her dog, she probably wouldn’t leave her house.

“I get very frustrated with this whole situation.”

Similar to Farkas, Bobbi-Lee Loganberg, a 65-year-old Vancouver resident, talks to her two best friends on the phone every day — something she refers to as “wellness calls.”

Since her husband died in 2019, Loganberg has relearned how to cook and during the pandemic, she’s been practising yoga and gardening on her balcony.

She says staying at home hasn’t made her feel like an outcast since she’s always been an independent person, adding that she enjoys her own company and feels more protected.

“I’m not a woman who’s gonna sit on my hands and wait for somebody to come save me… I get my sword and kill my own dragon,” she says.

Wister says we should be careful not to group everyone as a “vulnerable group” because it’s possible some people are physically isolated but not feeling lonely.

He adds that some older adults are active, have resources available to them and are healthy.

B.C. seniors advocate Isobel Mackenzie says there is some evidence that suggests older adults have been able to weather the COVID-19 pandemic better than others because they are psychologically more resilient.

One concern she does have is seniors being fearful of leaving their homes post-pandemic.

“We really have to look at ways to address that and to make (seniors) — when it is safe to do so — feel safe going out and being with other people,” she says.

During the first wave, long-term care facilities and retirement homes accounted for more than 80 per cent of all COVID-19 deaths in the country.

There is no national seniors’ strategy currently in place.

In January, doctors in Ontario signed an open letter to the province saying little has been done to improve the conditions in long-term care facilities, calling the issue a “grave humanitarian crisis.”

The letter called for an end to for-profit long-term care and to improve staffing levels and wages.

VanGorder, from CARP, says a lot of the care seniors receive in long-term care facilities comes from family members who help them eat and bathe and look after them since there isn’t enough staff.

Since many facilities are no longer allowing visitations due to the risk of COVID-19 transmission, VanGorder, who is based in Halifax, says seniors’ mental health has gone downhill.

“Especially for those with Alzheimer’s and other forms of dementia, where using their brain, being active (and) interacting with people on a daily basis is really important,” he says.

Wister, from the Gerontology Research Centre, says marginalized groups who were already at a disadvantage prior to the pandemic might experience more feelings of social isolation.

“They’re experiencing effects on their self-esteem (and) access to resources quite often … So I would suspect the pandemic is making those things worse,” he says.

According to the 2014 National Seniors Council report on the social isolation of seniors, specific groups of seniors were identified as being at greater risk of social isolation: immigrants, First Nations, LGBTQ2 and those who have low incomes.


Solutions for seniors and community initiatives

VanGorder says Canada could benefit from having a minister of loneliness like they do in Britain, a position created in 2018.

Alternatively, VanGorder says the issue of loneliness should be addressed by all the other departments since it’s something that impacts finance, health, education and other social departments.

He adds that the issues seniors are facing should also be treated the same.

Read more:
Alone in a pandemic — Relationships have become a ‘pressure cooker test’

“We have very good support for seniors and tools that we have to address loneliness are shared between all levels of government,” he says.

The U.K. also initiated a Campaign to End Loneliness in 2011, a network of organizations and individuals in the country who tackle the issue of loneliness by treating it as a public health concern.

Wister says we need to look at programs from other communities and countries and see what we can learn from them.

He adds that there is no “one size fits all” solution.

During the COVID-19 pandemic, community initiatives have sprung up across the provinces to aid seniors experiencing social isolation.

Letters and photos are collected from participants from around the world and given to seniors in retirement homes or long-term care.

“They’re in their rooms and a lot of people don’t have anybody — or have nobody — sending them anything,” Abfalter says, adding that some participants have become pen pals with seniors.

6:11
Feeling lonely? Why winter months can be some of the hardest

The Choose to Move initiative run through Mount Pleasant Neighbourhood began in 2016 and moved online due to the COVID-19 pandemic.

The free wellness program encourages seniors to be more physically and socially active through Zoom meetings, goal-setting, one-on-one consultations and activities chosen by the participants.

Sardelis, who nursed her mom back to health when she had COVID-19, says allowing families safely into senior homes can be a part of the solution for seniors who are lonely and deteriorating.

She remembers one day before her mom got sick, she wanted to dance with her and some of the personal support workers (PSWs).

She pushed her walker away, grabbed Sardelis’s and a PSW’s hands, started singing and began awkwardly line dancing using the one leg she could lift off the floor.

“When she got COVID-19 I thought, ‘I’m not done listening to you sing,” Sardelis says.

“You’re going to sing a little while longer.”

Alone and Apart is an ongoing Global News series tackling issues of loneliness and self-isolation, and creating long-lasting solutions to fight this epidemic within a pandemic. The series will run throughout the month of February. For more visit Alone and Apart.

— With files from Katelyn Wilson