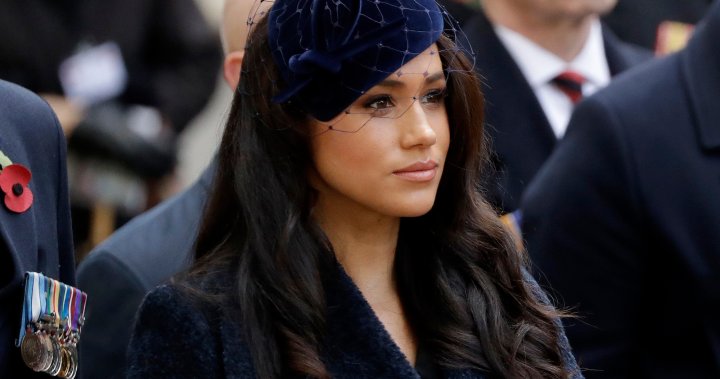 Meghan Markle, the Duchess of Sussex, has responded to a Times U.K. report claiming that she bullied aides and made them cry during her time at Kensington Palace as a working royal.

In the report, published late Tuesday, The Times said that some unidentified sources approached the publication because they felt there was a side to Markle that wasn’t fully known to the public. The sources claimed that Markle’s behaviour compelled two personal assistants to leave the palace, and “undermined the confidence” of a third staffer.

The report comes less than a week before the much-anticipated sit-down interview with Markle, Prince Harry and Oprah Winfrey, set to air Sunday night on Global in Canada.

Through her spokesperson, Markle, 39, said she was “saddened” by the claims, and outright denied them.

“Let’s just call this what it is — a calculated smear campaign based on misleading and harmful misinformation. We are disappointed to see this defamatory portrayal of The Duchess of Sussex given credibility by a media outlet,” said the spokesperson for Markle and Harry, in part, to The Times.

“It’s no coincidence that distorted several-year-old accusations aimed at undermining the duchess are being briefed to the British media shortly before she and the duke are due to speak openly and honestly about their experience of recent years,” read a separate statement from the spokesperson.

Read more:
Prince Harry and Meghan Markle confirm they will not return to royal roles

“The duchess is saddened by this latest attack on her character, particularly as someone who has been the target of bullying herself and is deeply committed to supporting those who have experienced pain and trauma,” it continued. “She is determined to continue her work building compassion around the world and will keep striving to set an example for doing what is right and doing what is good.”

The 2018 complaint in the Times report was allegedly made by Markle and Harry’s former communications secretary Jason Knauf, who submitted it in order to protect staff at Kensington Palace. According to the report, some staff were reduced to tears by Markle’s alleged bullying.

“Senior people in the household, Buckingham Palace and Clarence House, knew that they had a situation where members of staff, particularly young women, were being bullied to the point of tears,” a source told The Times.

One unidentified royal aide highlighted in the article, who was afraid of a confrontation with Markle, allegedly said to a coworker: “I can’t stop shaking.”

Another former aide told the Times that it felt “more like emotional cruelty and manipulation, which I guess could also be called bullying.”

Reportedly, Harry, 36, asked Knauf not to continue with the complaint. Lawyers for both Harry and Markle denied any such encounter took place, and said that Harry would never interfere in such a way with palace staff.

The couple’s lawyers also told The Times that the allegations are “being used by Buckingham Palace to peddle a wholly false narrative” before their interview with Winfrey.

One Mail on Sunday report from November 2018 called Markle “Hurricane Meghan” and said that the duchess frequently “bombarded aides” with emails and texts in the early morning hours.

Last month, a judge at London’s High Court ruled the tabloid had breached her privacy and infringed her copyright by publishing parts of the five-page letter she wrote to her father Thomas Markle, whom she fell out with on the eve of her wedding to Queen Elizabeth’s grandson, Prince Harry.

6:22
Is the Queen nervous about Harry and Meghan’s interview with Oprah? Expert weighs in

Is the Queen nervous about Harry and Meghan’s interview with Oprah? Expert weighs in

Additionally, Harry and Markle announced they’re expecting their second child this year, and confirmed they will not be returning to their royal roles.

The pair’s first televised interview since leaving their royal duties will air Sunday night at 8 p.m. ET on Global.

— with files from Reuters

Louisiana Woman Gives Free Wigs to Children Suffering Hair Loss — Their Reactions Will Warm Your Heart
The Walt Disney Company to mark 100th anniversary with new experiences
‘Gen Z yellow’: Next ‘it’ colour or marketing ploy?
7 Ways Childhood Trauma Shows Up in Your Romantic Relationships
7 False Beliefs That Will Keep You Trapped in Your Head Forever