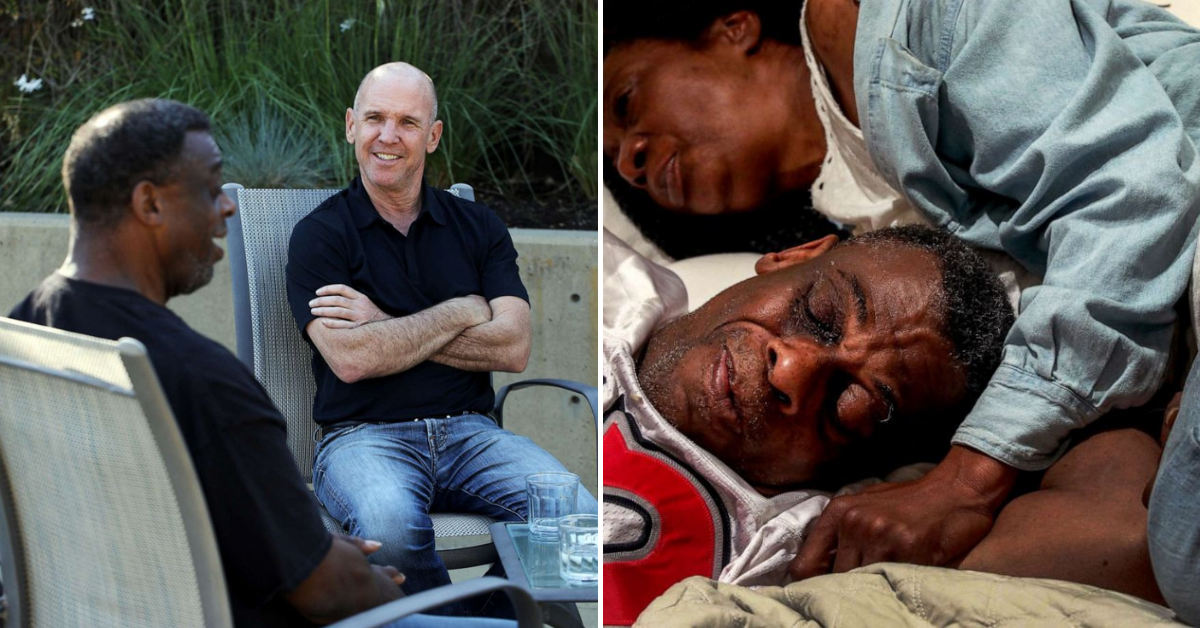 For a decade, Greg Dunston and Marie Mckinzie were among the 8,000 people experiencing homelessness on the streets of San Francisco. At least they were, until millionaire Terry McGrath invited them to stay with him in his home.

Down on their luck

San Francisco has an infamous issue with homelessness. While being the richest city in America with a largely liberal population, many avert their eyes and refuse to support measures to remedy the issues causing it.

But instead of waiting on others to do something, Terry McGrath did his part to help.

He read an article in the San Francisco Chronicle about Greg Dunston and Marie Mckinzie, a lovely couple who defied the stereotypes of the type of who live on the street.

They weren’t alcoholics or drug addicts and they didn’t have mental health issues. They did have disabilities — Dunston is blind in one eye and Mckinzie has a disease that makes it a struggle to walk — but mainly they were down on their luck.

“The thing that struck me and got me right away was the love between Greg and Marie and how it was able to survive in probably one of the harshest environments on earth,” McGrath told ABC News. “I could feel it.”

So, McGrath did something unbelievable — he invited them to stay with him in his $4 million home.

“There was no decision, there was no thought, there was no judgment. I was just like ‘this is done,’” said McGrath, who was divorced and an empty nester so he had plenty of extra room.

“I didn’t vet them. These are human beings and they’re not serial killers. They want to get in out of the weather. They want a roof over their head. They want to be warm.”

Dunston and Mckinzie were thrilled about McGrath’s hospitality.

“We wanted to do that,” Dunston said about moving into McGrath’s home. “There are a lot of people out on the streets but they have no choice.”

“I don’t want to live on the streets. A lot of people do, but I want to get in. I love to cook a lot so I wanted a kitchen, bed and shower.”

When the couple moved in, Taylor warned the local police force in his upper-class neighborhood that they were there with his permission. It was a good thing he did, because shortly after their arrival a neighbor called 911 on the couple simply for existing.

“I just pulled into the driveway and there’s some strange folks hanging around the house,” the neighbor said.

Another called police to say, “I just wanted to notify you that this woman is sitting at Lexford and Hampton … She’s smoking a cigarette — could be drugs.”

When McGrath heard one of the neighbor’s complaints, he couldn’t believe his ears. “I realized when she mentioned the word ‘situation’ that she was referencing Marie and Greg. And I said, ‘What situation?’ Are they vandalizing cars? Are they burglarizing homes?’”

He continued, “I just said, ‘This is one of the most offensive conversations I’ve ever had.’”

According to a local journalist, Piedmont’s residents are 74 percent white, 18 percent Asian and less than 2 percent Black.

At the time the article was released in early 2020, the formerly homeless couple had been living with McGrath for a year, and he had no plans to kick them out.

“They’re like family. There’s no way I’m going to let them go back to the street,” he said. “Most people who know me well know it’s easy to start and it’s hard to finish. And I’m never not going to finish.”

We can eliminate homelessness

San Francisco’s homeless situation is truly a national disgrace, and those who say nothing can be done simply need to see this story for proof that individual acts of kindness are possible and will help.

No matter who they are or what decisions they’ve made in their life, everyone deserves a roof over their head if they want it.

He Was Fatally Beaten by Memphis Police — Now People Around the World Are Sharing #SunsetsForTyre in His Honor
The two kinds of productivity advice
How to Show Up When Nothing About Your Life Is Perfect
Podcast: What to know about “novelty hunting.”
New Barbie Doll Honours First Black Aviator — Inspires Youth to Take to the Skies (PHOTOS)