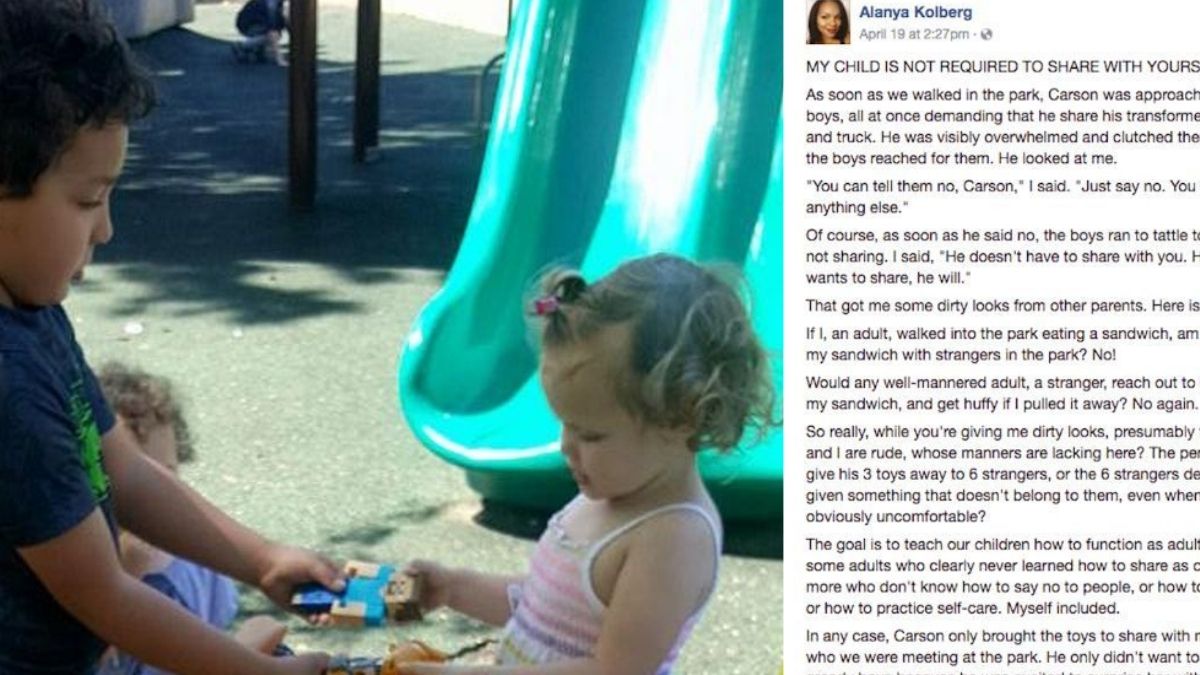 One mother’s controversial take on sharing started a passionate discussion and just might make you think differently.

What’s mine is mine

Posting on Facebook, Alanya Kolberg recounted bringing her son Carson to meet a friend for a little playtime at the park, where she said things quickly got out of hand.

“As soon as we walked into the park, Carson was approached by at least six boys, all at once demanding that he share his transformer, Minecraft figure, and truck,” she wrote.

“He was visibly overwhelmed and clutched them to his chest as the boys reached for them. He looked at me.”

What she told Carson created a commotion in the comments.

“You can tell them no, Carson,’ I said. ‘Just say no. You don’t have to say anything else.”

Kolberg said that the rebuffed kids “ran to tattle to me that he was not sharing”, to which she replied “He doesn’t have to share with you. He said no. If he wants to share, he will.”

This attracted “some dirty looks from other parents.”

Kolberg defended her actions in a post titled ‘MY CHILD IS NOT REQUIRED TO SHARE WITH YOURS.’

“If I, an adult, walked into the park eating a sandwich, am I required to share my sandwich with strangers in the park? No!”

“You don’t want kids asking your kid to share their toys.. Then don’t take toys to a park full of children,” quipped one parent.

One individual was even more concerned with Carson.

“Will you unwittingly make your offspring the odd one out/selfish or with a total disregard for humanity?”

One woman argued the exact opposite.

“Demanding your child share creates people-pleasing and lack of boundaries,” and that “People mad about that are the ones who won’t respect said boundaries.”

Others followed to Kolberg’s defense.

“I agree. I teach my kids that reciprocated sharing with playmates or friends is different than strangers.”

One mother who even admits that she “let lots of people take advantage of me because I wasn’t taught to say no for myself” sees in Alanya’s action a vital life lesson.

“I’m trying to teach my daughter young that she can say no to things. Like if she doesn’t want to be hugged or kissed, she can say no. Her body, her choice. I know this was talking about toys, but this is teaching consent.”

One woman was just happy to learn a different perspective.

“I never thought about it like that. Thank you for making me look at it from a different angle!!! Good job mom!!💜 .”

Kolberg said her lesson is less about being selfish than being mindful of the future.

“The goal is to teach our children how to function as adults. While I do know some adults who clearly never learned how to share as children, I know far more who don’t know how to say no to people, or how to set boundaries, or how to practice self-care. Myself included.”

We all want our children and the adults they become to be empathetic, compassionate and who willing to help others.

Yet Kolberg’s experience – and the ensuing discussion – reminds us that boundaries are less about keeping others out than about keeping ourselves intact.

Only then can we be at our best to help others.

The Single Greatest Mistake A Man Can Make | Jordan Peterson
How to Make Things Better When It Seems Like Everything Is Going Wrong
Year of the Rabbit: Canada’s animal shelters urge not to adopt bunnies on a whim
This Is What Self-Care Really Means, Because It’s Not All Salt Baths And Chocolate Cake
How to balance social expectations and your budget amid inflation: ‘It’s OK to say no’