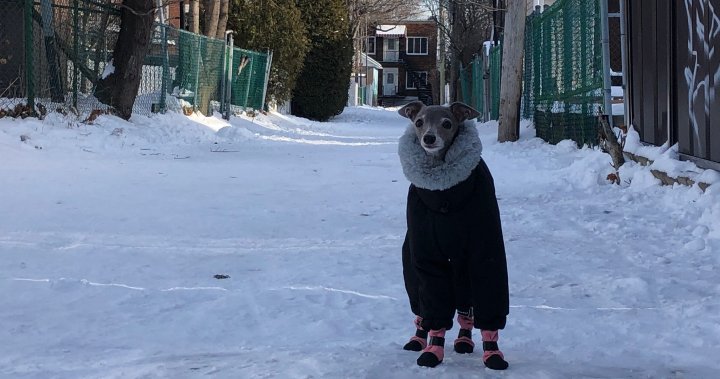 Tika the Iggy has been taking the internet by storm with her haute couture outfits and sassy attitude. And while you may not have known it, she’s been doing it from the Montreal neighbourhood of Ville-Emard.

Shapiro has been posting pictures and videos of his nine-year-old Italian greyhound online for years now. In recent months she’s gone totally viral.

“There’s one viral video on TikTok where she was wearing a bunch of clothes that she couldn’t wear throughout the years of lockdown, and I think a lot people related to that, like ‘Oh yeah, I also don’t get to wear anything because I was at home the whole time,’” Shapiro said.

The video has been viewed more than 30 million times on TikTok. In a high-pitched voice, Tika shows off all the outfits she loved, but couldn’t wear.

Brooke Shields, Sharon Stone, and Lizzo are just a few of the celebrities who have expressed their love for Tika online.

“I think it started to really go viral when Demi Lovato shared it, then Justin Bieber shared it on his story. Diane Keaton posted it on her feed then there was Oprah Magazine, Elle Magazine,” Shapiro explained.

Another recent video of Tika debating if outfits were “too much” was also a huge hit, with more the 3 million views on Tiktok.

Shapiro says Tika likes wearing the clothes, as Italian greyhounds often get cold. She now has her own agent, merchandise with her face on it, Italian greyhound fashion designers begging her to wear their apparel, and an upcoming feature in Vogue.

However, she’s still just a humble pup who sleeps about 20 hours per day.

“When Jennifer Aniston shared it on her story and, I thought that was a pretty huge deal. I kind of threw my phone across the room, like, ‘what’s happening?’ And Tika was just sleeping. She doesn’t even know,” he said.

Read more:
Oregon nurse on leave after bragging of COVID-19 violations on TikTok

Even though Tika has plenty of fame, Shapiro says he won’t quit his day job as a web developer, preferring to keep her social media accounts as a hobby. He said he enjoys his job. Besides, she’s not raking in too much cash yet.

Tika is also a self-professed gay icon, a role Shapiro and his husband take very seriously.

“We just first and foremost want to be visible for the younger gay generation, to kind of see maybe role models of two guys that are living a nice life,” he said, adding that he works with Rainbow Road, a Toronto-based charity that helps LGBTQ2 individuals escape persecution in foreign countries.

He says Tika does get recognized on the street more and more, but with her adorable looks, she got stopped even before she was famous.

‘Gen Z yellow’: Next ‘it’ colour or marketing ploy?
Domino’s Employee Delivers a $12 Order – But the Unusual Tip He Received in Return Takes Him by Surprise
This Is What Self-Care Really Means, Because It’s Not All Salt Baths And Chocolate Cake
This Is How You Become the Best Version of Yourself in One Step | James Lawrence | Goalcast
Deliveryman Arrives to Pick Up an Order From a Bakery – Breaks Down When He Finds Out Why His Own Name Is on the Package