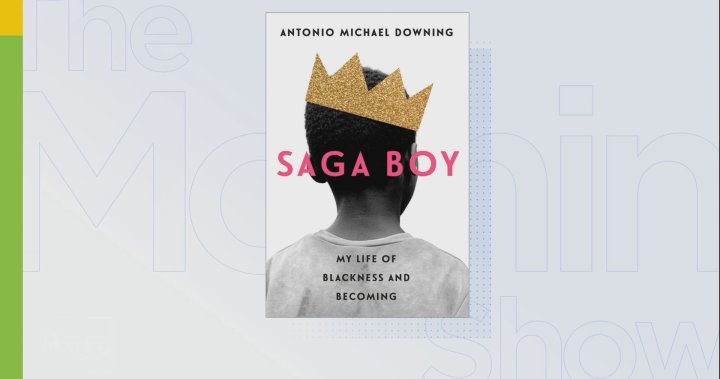 Antonio Michael Downing grew up in Southern Trinidad surrounded by jungles. But after the death of his grandmother, he made the move to Northern Ontario.

Downing shares his full journey in his recently released memoir Saga Boy. Through writing, he shares his experiences of exploring his journey from Trinidad to Canada as well as how he navigated his own racial identity and search for belonging.

In an interview with The Morning Show, Downing discussed the strong presence of his grandmother throughout his life. Out of the many lessons he learned from her, the two that left the biggest impression on him were songs and words.

“She was always singing … She taught me how to read at a very young age so that I could be her eyes, and those two things influenced my life to this day. I’m a writer and I’m a singer,” he said.

When Downing moved to Canada, he experienced racism for the first time at 11 years old. Throughout his journey, he realized there is a lot behind how people view him and that being Black is just one thing about him.

“Being Black just means you have to sort of navigate other people’s stories and my answer to that is to be creative and and really what they call Black excellence to be a little bit better.”

Navigating shifts in his own identity from making music to working in corporate Canada, allowed Downing to express different parts of himself, he says.

“All these identities I did in terms of performing just allowed me to bring out true identities, choose parts of myself that I couldn’t any other way,” he said.

In addition to working on shifts within his identity, Downing also says adapting to life in Canada and learning about how people lived their lives here in comparison to in Trinidad was fascinating.

In Trinidad, where the environment is like a sunny jungle and rainforest, Downing says the Canadian winter was a shock. Specifically, he found himself mesmerized by icicles.

“I had never seen ice outside of a freezer that didn’t melt. My aunt Joan would come to Trinidad and say, ‘In Canada we drive on ice’ and we would just laugh,” he said.

Additionally, Downing says the difference in how people spoke in Canada versus in Trinidad was different to him.

“Loving the sound of music and the sound of words I just wanted to fit in,” he said, adding that he would spend a lot of time practicing the Canadian tone and ways of speaking.

Watch Downing’s full interview with ‘The Morning Show’ in the video above.

Deaf Domino’s Employee Delivers Pizzas on Foot After His Car Breaks Down – In Return, He Gets a “Tip” of $12,000
The World’s Best Blind Mountain Biker | Brian Bushway | #shorts
Looking for love? 44% U.S. adults use dating apps to find long-term partners: study
How a social media group dubbed Mom Jeans is helping people fight inflation
All the Things I Didn’t Tell the Men I Dated Because I Was Afraid