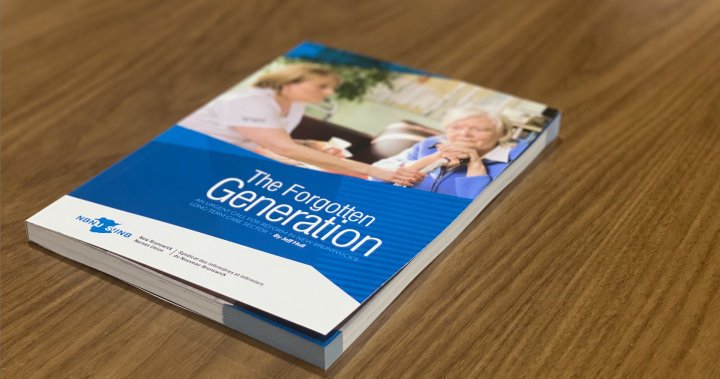 A majority of registered nurses in New Brunswick say that care has declined in the province’s special-care homes in the last several years, a report from their says.

The union, which represents over 500 registered nurses (RNs) in New Brunswick, published the report, The Forgotten Generation: An Urgent Call for Reform in New Brunswick’s Long-Term Care Sector, on Thursday.

It says that 73 per cent of RNs who responded to the survey said that resident care has declined in their long-term care homes in the last three to five years.

“Governance and oversight in New Brunswick’s long-term care sector has become so weak and ineffective that one academic — upon reviewing our report — declared the sector was ‘akin to be self-regulated,’” Doucet’s release read.

She also said in the release that the union will be calling for a public inquiry into the provincial long-term care sector, as the report found that the quality of care in nursing homes in New Brunswick has fallen to “unsafe levels.”

This is a direct result of a staffing crisis in the province that has “been allowed to spin out of control,” the release said.

The report said nearly half of the LTCs in the province failed to meet the minimum safe staffing ratios in 2019, and that reliance on casual staffing is “unacceptably high.”

“Nearly one-third of all RNs in New Brunswick’s long-term care sector left their positions in 2017.”

One of the recommendations the report makes is expanding the roles of nurse practitioners in the province.

It also recommends ensuring access to and increasing the capacities of nursing schools.

Among other things, the report also recommended strengthening the provincial government’s ability to monitor and enforce regulations for long-term care homes.

The report said this is an example of a recommendation that would “require minimal investment.”

“Without the ability to enforce its own regulations, no government reforms — not even with revisions to The Nursing Homes Act — will be worth the paper they’re printed on,” the report concluded.

“New Brunswick’s nurses will always be here for our seniors, but they can’t do it alone,” it read.

Paula Doucet said in the release it was her responsibility to speak up on this. She said she hopes to see change in New Brunswickers and the provincial government from the nearly 200-page report.

“If not for your loved one living in a nursing home, then because it is simply the decent human thing to do. Change must begin today,” she said in the release.

The survey was conducted by the NBNU online with questions sent to the 505 RNs working in nursing homes in 2018. The NBNU says 134 RNs, or 27 per cent, provided responses.

It Takes One Person To Make You Feel Like You Matter | Kyle Scheele Inspirational Speech | Goalcast
Uber Driver Donates a Kidney to His Passenger – Here’s Why He Insists It’s Not a Coincidence
Louisiana Woman Gives Free Wigs to Children Suffering Hair Loss — Their Reactions Will Warm Your Heart
This Year, Let Go Of The People Who Aren’t Ready To Love You
How to be the Smartest in the Room | Ibram Kendi | Goalcast