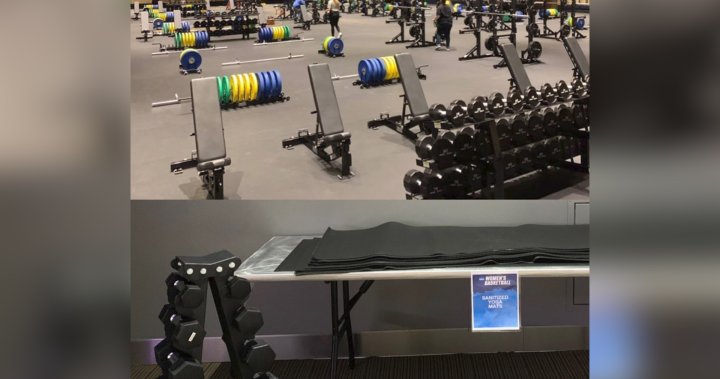 The NCAA came under fire on Thursday after Stanford sports performance coach Ali Kershner posted photos of the training facilities at the men’s Indianapolis bubble, comparing them to photos of the amenities at the women’s San Antonio bubble.

In the photos Kershner posted to her social media accounts, the men’s workout equipment, including squat racks, weight benches and dumbells, stretches as far as the eye can see, while the women have access to one paltry tower of dumbbells with a maximum weight of 30 pounds.

“Not only that – 3 weeks in a bubble and no access to DBs above 30’s until the sweet 16? In a year defined by a fight for equality this is a chance to have a conversation and get better.”

“We acknowledge that some of the amenities teams would typically have access to have not been as available inside the controlled environment,” said Holzman. “In part, this is due to the limited space and the original plan was to expand the workout area once additional space was available later in the tournament. However, we want to be responsive to the needs of our participating teams, and we are actively working to enhance existing resources at practice courts, including additional weight training equipment.”

“We fell short this year in what we’ve been doing to prepare,” Holzman said in a followup statement on Friday. She added that the NCAA was “actively working” on improving the women’s facilities, including updating the exercise facilities and food.

“It’s 2021 and we are still fighting for bits and pieces of equality,” she captioned her video.

WNBA star Sabrina Ionescu — also the 2020 national player of the year in NCAA women’s basketball — tweeted her disgust at the lack of equipment for women.

Women’s @NCAA bubble weight room vs Men’s weight room… thought this was a joke. WTF is this?!?
To all the women playing in the @marchmadness tournament, keep grinding! pic.twitter.com/K04KTv6s46

She then, like Prince, pointed out in a brief video that there is ample room to add more.

The 2021 NCAA women’s basketball tournament starts on March 21 and the men’s officially tipped off on March 18.

8-Year-Old Boy’s Family Is Down to Their Last $12 Living in a Shed – Until His Own Business Saves Them All
Femcels: Inside the enigmatic subculture of involuntary celibate women
How I Stopped Feeling Embarrassed and Ashamed of Being Single
The World’s Best Blind Mountain Biker | Brian Bushway | #shorts
Deaf Domino’s Employee Delivers Pizzas on Foot After His Car Breaks Down – In Return, He Gets a “Tip” of $12,000