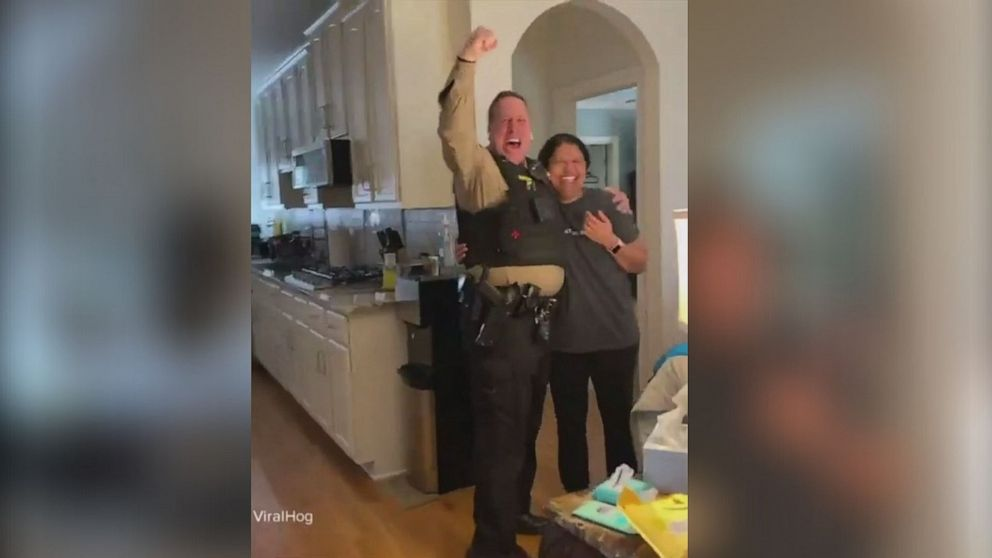 Talk about the hurdles that we had to pass to be wherever we are now. Never-ending.

What determines whether we make it through or break pursuing is our dedication to that goal.

A new nurse, Victoria Glossan walked home cancer-free along with her nursing degree. She worked hard through the hardships for over a year and a half to realize her dream. She surprised her parents, especially her dad with cancer-free news on Valentine’s Day.

What Kept Her Going, Her Dad

The dedicated new nurse from Oakridge, North Carolina, was diagnosed with Hodgkin’s lymphoma. She was at that time enthusiastically pursuing the third semester of her nursing degree.

“I was ecstatic and in shock at first,” she told the World News Tonight, after coming to her senses to believe the cancer-free news. “This was such a long battle for me, and I couldn’t believe we finally got to the end of it. I had to go through so much, and to reach this point was incredible.”

Her treatment was not just taking a few pills, and getting a few shots, it was strenuous between her school and work. Her determination and dedication got her through this. The Neulasta shots that she had to get after a heavy chemotherapy session had hurt her so much, that it felt like all her bones were breaking.

“At times, my dad would have to drive me to clinical…I had to be strong to the patients I was taking care of didn’t see my pain,” she continued. The new nurse surprised her loving dad, Sheriff Barry Glossan, with this great news on Valentine’s Day for the immense support he had given her.

A Lovely Valentine’s Day to Her Day

Glasson planned to play a small game with her dad to reveal the good news to him. She asked him to put his earphones on with loud music playing in them. Then, she challenged him to read her lips and guess what she was saying.

“I’m cancer-free,” Glosson said softly, as her dad tried his might to solve the puzzle and win the challenge. At first, he couldn’t get it. The smart sheriff that he is, he soon realized what his daughter was saying. The realization led to a cheerful, heartwarming scene, where he grabbed his wife, Smita, to embrace her.

Related News: The Inspiring Reason This Breast Cancer Survivor Posted a ‘No Breastfeeding Zone’ Sign Will Leave You Speechless

“I was overwhelmed with joy and was very excited,” Barry Glosson told the World News Tonight. The caring father recalled every moment he saw his daughter muster up the strength to care for others.

“I saw my daughter go through the toughest battle of her life…It was so scary to watch my daughter live this nightmare,” Barry Glossan told the World News Tonight.

Victoria Glossan never backed down. She hasn’t taken a break during her cancer diagnosis, nor did she take one during her recovery. She is back on the frontlines as a new nurse at the emergency department in a Greensboro hospital. As always, she is doing what she loves, caring for people.

The Choice We All Have , But Only a Few Apply It | Joe Dispenza
Quordle: Hit Wordle-style game finds B-U-Y-E-R in Merriam-Webster
7 Ways Childhood Trauma Shows Up in Your Romantic Relationships
Haute couture goes ‘surreal’ and upside-down at Paris fashion show
Sweet Revenge: Woman Wins Lottery Jackpot After Husband Leaves Her for Best Friend