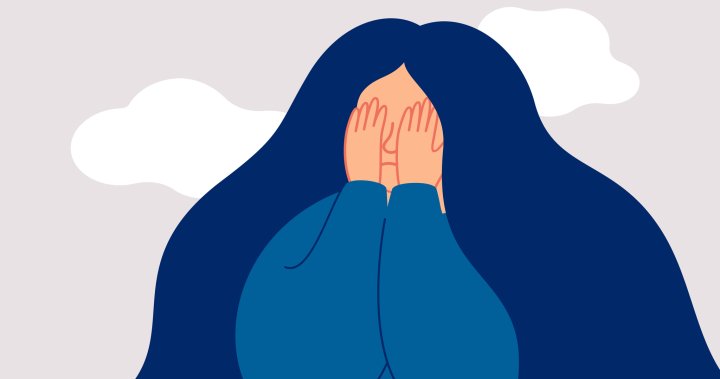 Last December, 23-year-old Hannah Lohnes began having recurring nightmares of contracting COVID-19 and passing it on to her family.

It had been a month since the Surrey, B.C. resident was diagnosed with COVID-19, and she says sometimes when she laid on her back, she felt suffocated, gasping for air.

“I realized that it had affected me mentally a lot more than I thought it had, with both my anxiety and depression shooting way up.”

After being referred to a psychologist, Lohnes was diagnosed with post-traumatic stress disorder (PTSD).

“It has changed my personality (and) how I’m carrying myself. I used to pride myself on being a pretty social person … where now, I feel like I’m very distrusting of other people.”

PTSD occurs in people who have experienced a traumatic event such as a natural disaster, a serious accident, or, in this case, contracting a virus in a pandemic.

Though not much data has been collected on PTSD as a direct result of COVID-19, some experts say it’s highly likely people are experiencing it — especially for those who have had severe, debilitating cases.

Rosalie Steinberg, a psychiatrist at Sunnybrook Health Sciences Centre in Toronto, has been assessing patients who have been intubated in the intensive care unit (ICU) and need rehabilitation.

Read more:
Feeling lonely or anxious during the 2nd wave? Here are ways to cope

She says in the past month she’s been diagnosing more COVID-19 survivors with PTSD.

“They are having nightmares and flashbacks. They are hypervigilant. They are very anxious,” she says.

“The process of facing your mortality — needing to be intubated in an ICU, saying goodbye to your family, not knowing if you’re going to wake up or survive — is very traumatic.”

A small study published in JAMA Psychiatry in February looked at 381 patients who survived COVID-19 at a single hospital in Rome. Of those patients, over 30 per cent had PTSD.

Similarly, the Centers for Disease Control and Prevention published a survey last August and 26.3 per cent of people reported having a trauma and stress-related disorder due to COVID-19.

The virus triggers an inflammatory response in our system and that inflammation can go to the brain, says Steinberg.

“And it creates sort of a biological disposition to anxiety, depression and PTSD,” she adds.

Additionally, she says it’s common for people to enter a delirious state when they’re physically unwell. Some patients she’s seen have been experiencing visual or auditory hallucinations in the ICU, which can be traumatizing for them.

“What we know is that people who have had to go to the ICU, and on top of that, were delirious while in the ICU, are at the highest risk of having PTSD.”

Steinberg says everyone in the medical community was preoccupied at the beginning of the pandemic — trying to understand the virus and how to stop it from spreading.

A year later, they are starting to take a deeper look at the longer, psychological impacts COVID-19 will have on the population.

In her department, psychiatrists have begun asking patients if they’ve had the virus as part of their initial assessment.

“Because that flags for us that they are now at an increased risk for some kind of psychiatric or cognitive disorder and we need to start assessing for COVID-19 as part of our clinical assessment.”

Steinberg’s colleague has also set up a PTSD clinic for COVID-19 survivors, adding that new referrals have started to come in.

2:29
Alone and Apart: How relationships have changed during the pandemic

Alone and Apart: How relationships have changed during the pandemic – Feb 13, 2021

Ruth Lanius, the director of the PTSD research unit at the University of Western Ontario, says frontline healthcare workers are also susceptible to having PTSD right now since they are facing increased burnout and “moral distress.”

“Talking to some of the healthcare workers at the height of the second wave … I could feel their exhaustion, their burnout, their desperation,” she says. “It was palpable.”

A study released earlier this month by the European Journal of Psychotraumatology found that 22 per cent of frontline healthcare and social workers met the criteria for having PTSD.

Lanius says we could expect the psychological impacts of COVID-19 to emerge during, if not later than, our return to normalcy.

“The adrenaline rush sort of keeps them going, but once it’s all over and once it all settles … I think people are going to realize what’s happened,” she says.

“All kinds of people are going to be vulnerable to experiencing an onset of symptoms.”

Maneet Bhatia, a Toronto-based psychologist, says people who have had a history of PTSD can also be retriggered during the pandemic.

“I’m finding a lot of patients who’ve struggled with PTSD prior to COVID-19 have an intensity in their symptoms … and they may not actually have suffered from the virus themselves.”

Additionally, people who have experienced trauma from circumstances that have coincided with the pandemic — like racial trauma — are facing layered anxieties, says social worker and psychotherapist Celine Williams-Tracey.

“Someone from the BIPOC community can be walking around, dealing with the worry and fear of COVID-19, but they can also be dealing with racial profiling or racism,” she says.

“Sometimes it will take the experience of the symptomology of PTSD to another level.”

Bhatia says as the vaccine rolls out, people generally might face more anxiety because we have to “unlearn the new normal we built for ourselves.”

1:54
COVID-19 has seen past trauma resurface for victims of sexual violence: advocates

COVID-19 has seen past trauma resurface for victims of sexual violence: advocates – May 7, 2020

Being comfortable around groups of people and not wearing a mask will take time, he adds.

“We need to have compassion for ourselves … It’s a constant battle, a constant negotiation, a constant challenge we’re all kind of facing, and it triggers us every day in different ways.”

Steinberg adds that helping people recognize that what they’re going through as PTSD helps them normalize their experience, aiding the treatment process.

“The most important intervention is to provide psychoeducation and to tell them that what they’re experiencing is distressing, but it’s not surprising and we can explain it.”

How to Un-Stub Your Toe on the Nail of Life | Eric Bailey Motivational Speech | Goalcast
Uber Driver Donates a Kidney to His Passenger – Here’s Why He Insists It’s Not a Coincidence
7 False Beliefs That Will Keep You Trapped in Your Head Forever
This Is What Self-Care Really Means, Because It’s Not All Salt Baths And Chocolate Cake
Food inflation: Shoppers turn to saving hacks long used by older Canadians