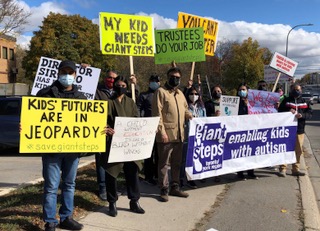 For the last five years, Barkaat Ahmad’s son Amaar has been a student at Giant Steps, a Toronto school and therapy centre for elementary school-aged children with autism spectrum disorder (ASD).

“This is the main (support) that we have for our son,” he says.

Giant Steps, which also has a location in Montreal, offers one-on-one support, speech, behaviour and occupational therapies as well as specialized equipment and resource areas for students with ASD. Ahmad says the school could serve as a model for other educational systems across Canada, which could adapt and apply the school’s methods.

“Until you see what Giant Steps offers, you really don’t know what you’re missing out on,” he says.

For the past 25 years, Giant Steps has operated in partnership with the York Region District School Board (YRDSB), but that is now coming to an end — the YRDSB has officially decided to end the partnership, effectively shuttering the program in Toronto.

Martin Buckingham, volunteer president of Giant Steps, says they were made aware of YRDSB’s decision to end the partnership in January 2020.

“It’s important to note that YRDSB is not closing Giant Steps,” Licinio Miguelo of YRDSB’s corporate communications said in an emailed statement to Global News. “Giant Steps is a separate and independent organization, with its own Board of Directors, and makes its own decisions.

According to Miguelo, there have been many changes in programming since the “commercial relationship” started in 1995.

“The Board’s special education programs, supports and services for students who have a diagnosis of autism has been further developed and enhanced,” he states.

He adds that the Ministry of Children, Community and Social Services has also enhanced services for children with autism, and provides services to YRDSB students with autism through the Children Treatment Network (CTN).

“Together with CTN, YRDSB provides the programs, supports and services for students with autism. YRDSB feels it is no longer necessary to have a Memorandum of Understanding with an outside provider as part of its service delivery model.”

According to the families Global News spoke with, they’ve heard multiple potential reasons for ending the partnership, including YRDSB wanting to ensure equity to offer support to all students with exceptionalities and that there are improved programs already available at YRDSB.

Families like Ahmad’s, along with staff and volunteers of the school, have been continuing to fight to save Giant Steps by emailing school board decision-makers, garnering over 8,700 petition signatures, collecting letters of support from local MPPs and even organizing protests.

“Giant Steps is an answer to so many people’s needs … and a step forward for autism education and the fact that the school board can’t see that and embrace that is extremely frustrating,” says Buckingham, whose son also previously attended Giant Steps.

Buckingham adds YRDSB’s partnership with Giant Steps has allowed parents to access resources for their children without paying high prices at comparable programs or private schools.

While Giant Steps charges an annual $7,000 fee, that fee can now be paid through the Ontario Autism Program (OAP) funding, says Buckingham, adding other programs and schools can add up to anywhere from $50,000 to $70,000 a year.

Buckingham compiled and submitted a formal complaint in February 2021 to the YRDSB trustees, outlining complaints with the board’s decision. He also gathered testimonies of support from 48 current and previous families who had children enrolled in the program.

“The decision was made with no study, no evidence-based decision-making, no consultation with autism advocates,” says Buckingham.

Buckingham says while equity was pinpointed as a key reason to end the relationship with Giant Steps, the YRDSB did not consult their Equity and Inclusivity Advisory Committee or their Special Education Advisory Committee. In the formal complaint, it is also highlights that 67 per cent of Giant Steps students are from a recent immigrant or visible minority background.

“Not only are you ending a school and using equity as a reason, you’re also ending an inclusivity program that’s unique in York Region and you’re impacting racialized communities,” says Buckingham.

Miguelo reiterated in his statement that “all YRDSB schools strive to be safe, welcoming and inclusive learning and working spaces for all students and staff.”

“We look forward to welcoming all students whose families choose to return to YRDSB schools.”

According to a 2019 study by Wilfred Laurier University researchers, families raising children with ASD face heightened levels of stress as well as emotional, physical and social well-being implications.

Additionally, these families often spend a lot of time — in addition to work and other tasks — taking care of and advocating for their children.

The study found, on average, that caregivers estimate they spend 14 hours per week facilitating service provision for their children and 10 hours advocating for their children, for a grand total of 24 hours a week.

In addition to navigating heightened hardships due to the COVID-19 pandemic, Giant Steps families have also been experiencing increased stress and worry about the school closure and what this means for their children.

“I have no idea why they wouldn’t want to put it off and do the right thing,” says Buckingham.

Maya Sabharwal says Giant Steps is a collaborative environment where both teachers and therapists have worked to come up with an education and therapy plan for her son.

“It’s such a supportive environment. And they’ve really encouraged my son to be as independent as possible,” she says.

Sabharwal points to staff helping her son toilet train as an example, adding they have sat with him in the bathroom for an hour encouraging him and have helped him work towards other goals to help him succeed.

“It was a really great program. And then we were blindsided when the board (made its decision), we weren’t given any reason,” she says.

Sabharwal adds that there simply aren’t any equivalent options available to her and other parents of children with ASD.

“Initially (the board) said it’s not equitable and there are similar supports available in the board, and what I’ve heard from other parents whose kids have been in regular community classrooms is there isn’t the equivalent support,” she says.

While the board does have therapists it employs, they are not in the classroom with the kids like at Giant Steps, says Sabharwal.

Read more:
Autism and isolation — How coronavirus is affecting kids on the spectrum and their parents

“We still feel like our children are being treated like furniture, they’re just being placed wherever, with no regard for their needs,” she says.

At the end of the day, parents of children with ASD want their children to be as independent as possible and to be able to do things for themselves, adds Sabharwal.

“We want them to have as many skills, not just academics….There’s life skills we want them to have and being able to cope in a world that’s not tailored for them,” she says. “These kinds of programs, especially when they’re young, are so important to teach them what they need to know.”

While Sabharwal says her family is looking for alternatives within the public school board if Giant Steps closes, she knows it won’t be the same.

“We’re running out of time…. We don’t have a lot of choices. We’re just trying to see what’s available on the board and trying to get the best we can,” she says, adding that families have been left without a choice.

The families of Giant Steps have been experiencing immense difficulty, Ahmad says, adding that he wouldn’t wish for any parent to go through that.

The hope is not only to save Giant Steps but to create a model throughout the board and country so “no child has to suffer,” he says.

“I’m definitely not ready to give up. We’ll fight whatever it takes to save the school,” says Ahmad. “And my fight is honestly not just for my son, my fight is for every child (with ASD).”

This Year, Let Go Of The People Who Aren’t Ready To Love You
It Takes One Person To Make You Feel Like You Matter | Kyle Scheele Inspirational Speech | Goalcast
Domino’s Employee Delivers a $12 Order – But the Unusual Tip He Received in Return Takes Him by Surprise
How to Un-Stub Your Toe on the Nail of Life | Eric Bailey Motivational Speech | Goalcast
How to be the Smartest in the Room | Ibram Kendi | Goalcast