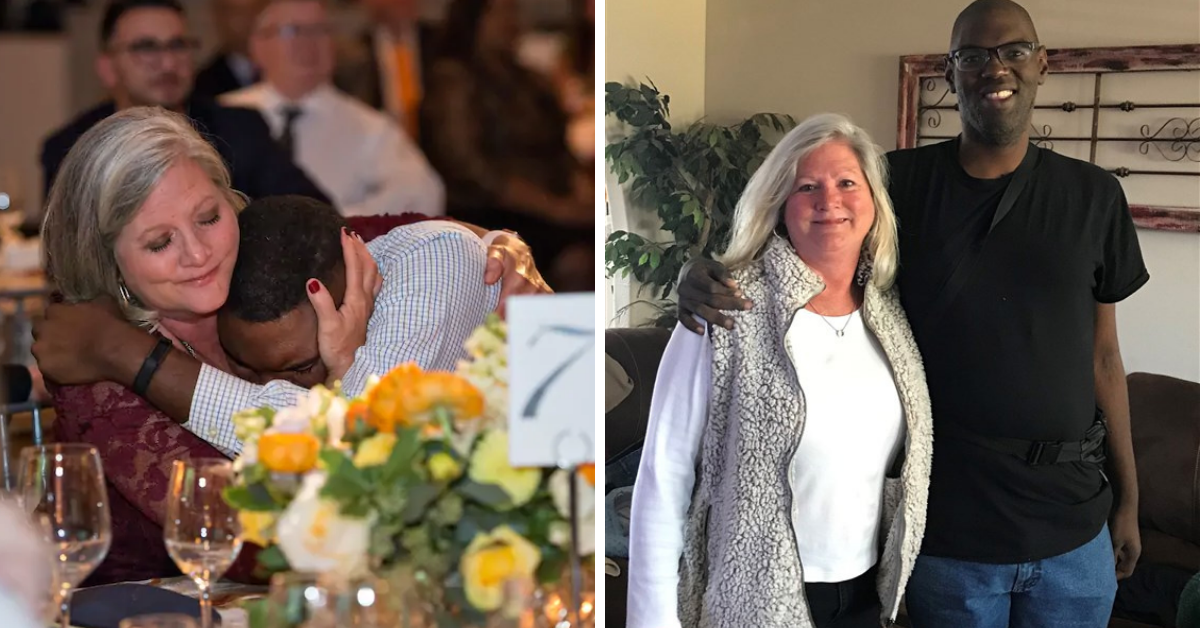 Jonathan Pinkard, 27, was taken off the heart transplant list and given just months to live.

Then, he met Lori Wood, 57, a nurse at Piedmont Newnan Hospital in Georgia.

Forty-eight hours later, Wood bravely asked Pinkard if she could adopt him, providing the solution he needed to be given a heart transplant — and therefore saving his life.

The waiting list for organ transplants is extremely long, so patients are evaluated in terms of whether or not they’ll be able to take care of themselves after surgery.

Evaluators want to know that patients will follow doctors’ orders, show up for follow-up appointments, and take the necessary immunosuppressive drugs after surgery.

As an autistic man raised by his then-deceased grandmother and with a mother in a rehab facility, it wasn’t guaranteed Pinkard would be able to do all of those things.

Every time he’d been discharged from hospitals in the past, he was sent to a men’s shelter, which wasn’t a place that’d be able to adequately care for him.

“They would not keep him on the heart transplant list because he had no support system, nobody that was willing to take care of him and no family support,” said Wood, a nurse assigned to take care of Pinkard, in a Facebook video.

Wood soon realized that if she didn’t do something, Pinkard would be taken off the list and left to die.

“When you’re a nurse and wanting to fix and help people that can be very frustrating if you know a patient needs something and for whatever reason they can’t have it.”

Wood decided to adopt him

During the two days that Wood was Pinkard’s nurse, the situation “gnawed” at her.

Finally, she decided to ask him if she could adopt him — doing so would prove to evaluators that he’d be able to be taken care of post-surgery and allow him to remain on the list.

“I think at some point God places people and situations in your life and you have a choice to do something about it,” Wood said in the video.

“For me with this situation there was no choice. I had a room, I was a nurse, I could take care of him. So it really wasn’t anything that I struggled about it was just something that had to happen. He had to come home with me.”

Mike Robertson, CEO of Piedmont Newnan, said in the video that Wood’s decision surprised him.

“Most caregivers have big hearts, but I have not seen any nearly as close to Lori. Besides needing the heart, he needed caregivers, he needed that support,” Robertson said. “Lori became that guardian and officially adopted him in order for him to get on the list.”

She took him home

Wood told TODAY “she didn’t know a thing” about Pinkard when he moved in, but they got along quickly. They bonded over their love for College football and the game show “Family Feud.”

“Jonathan has his chair, and I have my chair,” Wood added. “We like game shows and high five back and forth if we get an answer right. He is very loving.”

In the video, Pinkard said Wood, who he calls “Mama,” has taken good care of him.

“Miss Lori has been awesome. She’s very loveable to me, and not only me but to her son as well,” he said.

“They really treat me like family, I’m really thankful.”

It is not every day that a decision by a stranger can save a life, but that’s exactly what happened here.

Wood proved that kindness can truly be life-saving and reaffirmed that nurses are, in fact, superheroes.

The Most Heartfelt Speech About Being Your Best | Gian Paul Gonzalez | Goalcast
If You’re Feeling Judged: One Thing You Need to Understand
Kentucky Woman Gets Unbelievably Lucky at Her Office’s Christmas Gift Exchange — Now She Can Afford to Send Her Kids to College
How a social media group dubbed Mom Jeans is helping people fight inflation
Podcast: What to know about “novelty hunting.”