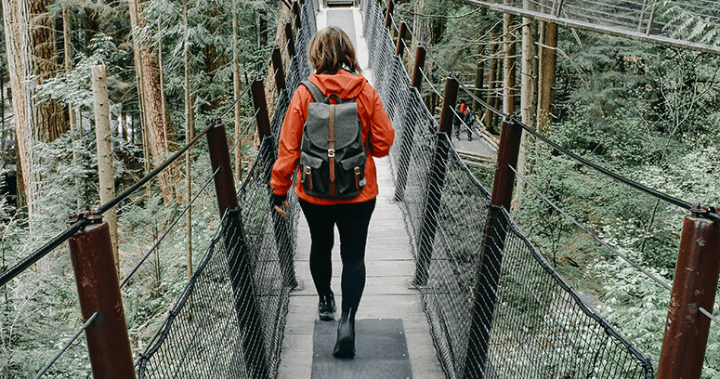 Check out these Canadian trips if you’ve always wanted to travel solo.

While it can be intimidating at first, once you’ve tried it, you’ll be hooked. After all, when you’re not with a travel buddy, you can go where you want to go, see what you want to see and do what you want to do. It forces you to be more open, which in turn makes it easier to meet new people. Canada is the perfect country for exploring by yourself. To get you started, here are some of the top trips for solo travellers.

Toronto to Vancouver on the Canadian

It’s the mother of the best train trips in Canada, taking you across most of the country. A solo trip on the Canadian lets you stare out the window and watch the scenery, or meet people in the dining car when you need company. It’s stress-free travel at its best. This 4,466 km cross-Canada trip is once-in-a-lifetime and picture-perfect.

See also: I travelled solo for the first time during the pandemic – here’s how it went.

St. John’s is small enough to feel homey, but not so small that it’s like a sleepy backwater. You can easily explore the city on foot and, if you’re travelling solo, you can navigate the sloping hills and take tons of photographs of the colourful buildings at your own pace. (In the warmer months, anyway.)

The Cabot Trail on Cape Breton Island is a  Canadian road trip you need to take at least once. The scenery is spectacular and you’ll want to stop every now and then just to admire the view. Want some human contact? Drop in at one of the quaint pubs along the way and tap your feet to the sounds of Cape Breton fiddling. (Again, summer is best.)

Related: Italian dream: what a Torontonian spent in a day as a tourist on the Amalfi Coast.

Banff National Park is home to some of the best hiking trails in Canada. Some of the easier ones are perfectly safe to do on your own. Hiking the more difficult trails or undertaking activities like rock-climbing alone is never a good idea, but in Banff’s hostels, you’ll meet plenty of other solo travellers who might venture out with you.

One of the most beautiful places in Canada, Quebec City is a great destination for solo travel. The people are very friendly and won’t hesitate to strike up a conversation. While most of Quebec City’s inhabitants can speak English, your visit will be much more rewarding if you know some French.

See also: Up for a spooky stroll? 12 best ghost tours and walks in Canada.

Halifax is one of Canada’s most underrated cities. It’s vibrant but compact, with friendly locals and lots of fun spots for hanging out. There are great beaches within easy reach of the city and plenty of tours on offer: from whale-watching to wine tasting. Plus, rent a car and go on day trips to Nova Scotia’s quaint little towns and fishing villages. (We don’t need to remind you about summer again, do we?)

Related: This Canadian island was named one of the ‘best islands in the world‘.

While the city of Niagara Falls is overflowing with honeymooners, little Niagara-on-the-Lake is perfect for the solo traveller. There’s a lot more than just a day trip to one of Canada’s must-see waterfalls. Take in an interactive theatre performance, explore the streets with their historic buildings or go biking among the nearby vineyards.

There are several bus tours to the region’s wineries too, which resolves the question of who will be designated driver when you go wine-tasting without a travel partner.

Related: We scoured BC liquor stores for celebrity wines — here’s what we thought.

Montreal offers the best of both worlds for solo travellers: anonymity when you want solitude, and good company when you want social interaction. The shopping is great; so is the food. The city’s charms are endless and, with festivals throughout the year, you’ll want to come back again. Like most cities in Quebec, being able to speak French will enhance your experience.

You may also like: The world’s best culinary experiences for your next vacation.

With a happening downtown core, attractions like the Calgary Tower and plenty of green space for some solitude, Calgary has everything the solo traveller might want. If you’re a bit of a party animal, Calgary is also one of the best places to visit in July, not only for great weather but for the wild and raucous Calgary Stampede.

See also: The world’s coolest street is located in Canada.

As Canada’s largest city, safe and diverse Toronto has a lot to entertain the solo traveller. Whether you want to explore museums and galleries, eat your way around the different neighbourhoods or do something sporty, you’ll find it here.

You may also like: TIFF 2022: here’s where to meet your fave celebs in Toronto.

Victoria is one of the best cities to visit during summer, for good reason: there are colourful blooms and fluttering butterflies everywhere, making the city’s gorgeous architecture even more stunning. It’s a place you’ll want to explore on foot or by bike. If you’d like some company while doing so, several travel agencies in the city offer walking and bicycle tours.

Is your idea of bliss spending hours in a museum or art gallery without anybody asking you ‘Can we leave now?’ Then Ottawa is the solo travel destination for you. The capital is home to the Parliament, a host of museums and the National Gallery of Canada. In winter, the Rideau Canal becomes the world’s largest skating rink.

There’s nothing like a peaceful paddle and camping under the stars to feed your soul. Killarney Provincial Park is one of the best canoe and camping destinations. Its Dead Lakes are one of those secret places locals don’t want you to know about. If you’re worried about safety, you can hire a guide to show you the ropes.

Tofino is one of the world’s best places for a mother-daughter trip, but it’s also a great destination if you like going alone. Don’t know how to ride the waves? Sign up for lessons at one of the local surf schools. You’ll quickly get hooked on the blissful solitude of having nothing but the surf for company.

Related: New research reveals Canada’s ‘greenest cities’ – and the top 5 may surprise you.

Winnipeg is one of Canada’s up-and-coming destinations you’ll enjoy exploring on your own. When you’ve shopped ‘til you dropped at The Forks, you can go on a museum crawl, do yoga or get pampered at a spa. With its variety of summer festivals, Winnipeg is one of the best places to visit in August.

You may also like: Want to save money on travel in 2023? Here are a few tips.

The Sunshine Coast is the perfect destination if you’re a solo traveller who loves the great outdoors. Here, you can go for long walks in the forest or on the beach, bike from town to town or go fishing. There’s plenty more to do, but activities like scuba diving and rock climbing are best done with a friend. Every summer, the town of Sechelt hosts the Festival of the Written Arts, a gathering of Canadian writers and bookworms.

The Northwest Passage on a cruise

Going on a cruise is a great option if you like to travel on your own, since you don’t have to deal with the headache of finding transport, accommodation and food. If you can’t stand the thought of being surrounded by families and retirees, though, you might want to consider cruises that go off the beaten path. You can’t get much more “off” that path than the Northwest Passage, which takes you through some of Canada’s most unspoiled spots.

There are many reasons why Vancouver is one of Canada’s top tourist destinations. The city is so ridiculously beautiful that it’s a popular filming location. It offers everything from beaches to mountains, from quiet time in nature to a bustling nightlife. The extensive public transport network makes getting around a breeze, too.

Related: These sustainable travel essentials are a must.

Edmonton may be in the shadow of Calgary, but this doesn’t mean that it’s an inferior destination. In fact, the West Edmonton Mall makes the city a fun option for solo travel. You can also explore Edmonton’s museums, parks and unique clinker-brick architecture. In winter, the city becomes one of the best places to see the Northern Lights.

You may also like: Alberta’s Indigenous-led tourism experiences are among ‘National Geographic’s’ top 2023 travel destinations.

Whistler is paradise for adventure travellers. There’s great hiking in summer and superb skiing in winter. It’s a great place to meet other people, too. Many of the seasonal staff working at Whistler’s resorts come from other countries, so you can strike up international friendships without having to leave Canada.

See also: We may have found the most Instagram-worthy spots in New Brunswick.

How to Un-Stub Your Toe on the Nail of Life | Eric Bailey Motivational Speech | Goalcast
Beyond Dry January: 5 Benefits of Extending Your Break from Alcohol
How to be the Smartest in the Room | Ibram Kendi | Goalcast
Uber Driver Donates a Kidney to His Passenger – Here’s Why He Insists It’s Not a Coincidence
This Is What Self-Care Really Means, Because It’s Not All Salt Baths And Chocolate Cake