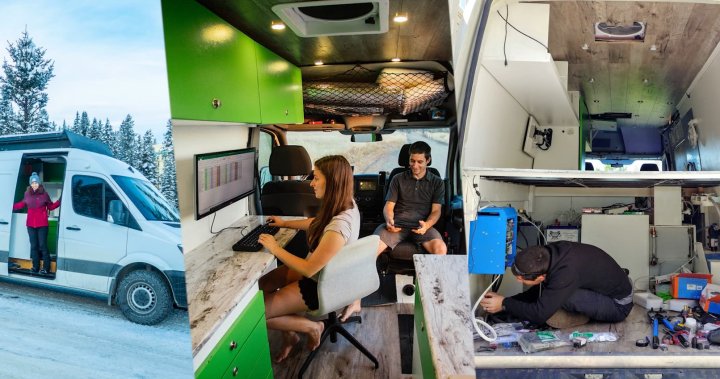 Madison McNair and her husband, Raynor Vickers, are van lifers.

The couple spent two years living and working out of their 85-square-foot Sprinter van as they travelled through Canada and the United States.

Then the couple decided to share their expertise and love of the road with others and start their own van conversion shop, located in a small town on the south eastern shore of Georgian Bay in Ontario.

“We had just started construction when the pandemic was declared and I honestly thought it was like the end, we made the wrong investment, we’re going to be in trouble,” McNair told Global News.

In reality, COVID-19 has only accelerated business.

That’s because some Canadians have been ditching traditional homes for vehicle living to escape lockdowns.

“It now seems laughable that I ever thought there would be a decline, because, of course, if you’re stuck at home, you’re suddenly looking at your backyard, realizing we live in an incredible region — why not go road trip?”

The allure of travel and the simplicity of the van life lifestyle has given birth to a worldwide social media phenomenon, which has only been fuelled by the pandemic.

Search the hashtag vanlife and it generates millions of pictures and videos of nomads cooking food to stunning views or enjoying evenings under starry skies.

The Naing family from British Columbia started their adventure in 2019.

They decided to escape the “rat race” of everyday life, so they could spend more time with their two kids. They customized a van so that it could accommodate the four of them living in a small space.

The family spoke with Global News from a dive shop in Crete, Greece.

“We just wanted to travel. We wanted to find a way that’s the most economical for us … and spend more time with the family,” Margie Maglanque Naing said.

“We actually ended up building one ourselves. Our van name is YOLO just because we only live once and that’s sort of our motto,” added Juvenal Naing.

The family was spending their days skiing in Macedonia, snorkelling in Italy and wandering ancient ruins, augmenting the homeschooling of their children Zara, 12, and Maximus, 10.

From the van, the promises seemed endless. When the pandemic lockdowns started in March 2020, they were worried it was all going to come to an end.

“We even talk about, should we come back and finish this trip? But we just contemplated and decided, you know what? Everyone in the world is living the same thing. … We just need to adapt,” Margie told Global News.

Adjusting to pandemic restrictions seemed easier for the family, the self-containment and self-sufficiency of the van lifestyle allowed them to travel and tour with ease.

It even opened up opportunities to experience historic sites safely.

“Because of different lockdown scenarios and people are concerned about travelling, … there’s all these tourist spots practically empty,” Juvenal said.

“So, we have these beautiful places almost to ourselves and enjoy it without the crowds and the lineups. We’ve been pretty lucky.”

For retirees Mark and Linda Hachmer, van living is all about adventure.

“It’s all about the journey. It’s very hard to describe,” Mark Hachmer said.

When the couple retired, they were excited to travel. After the pandemic started, they worried it could sideline all of their plans, but they spent the time taking short trips and fixing their van for adventures to come.

“We get in our van and we are just like, ’Yeah, we are in our little house,’” Linda Hachmer said.

2:00
Retirees flock to van living during the pandemic

Retirees flock to van living during the pandemic

“So there’s a sense of minimalism that is inherent in this kind of travel,” Mark added.

Living in a vehicle is not a new concept. Long before it was trendy on social media, there were versions of people living this way throughout history. For example, a family from the United States transformed a double-decker bus into a livable vehicle for travelling in the early 1900s.

Another is the popular Volkswagen microbus synonymous with the hippie counterculture of the 1960s and 1970s.

For some it’s an economic necessity

Thomasina Pidgeon has been living in a van for more than 25 years.

The renowned rock climber moved into her first vehicle when she was roughly 20 years old.

“It feels like the way that I’m supposed to live. Yeah. It just feels right to me. Like when I’m in a house, I feel really restricted,“ Pidgeon said. “When I’m in a vehicle, I just feel more free. I can move around, I can change my environment.”

The 46-year-old owns a business in Squamish, B.C. And while she prefers this form of lodging, she says she knows others who do it out of necessity.

The high unemployment rates, the inability to pay rent and the red-hot housing market have forced some into looking for alternative options.

“There’s people that are doing it because they just have no choice,” she said, adding, “And then there’s people like me. I mean, actually, I don’t really make that much money. I own my own business. But the amount of money that I make is below poverty level.”

There’s no real data on the number of people who live in their vans across the country.

Some jurisdictions have bylaws that prohibit it, and as the affordability crisis continues to rise in Canada, tensions between cities and vehicle residents seems to be growing.

Some municipalities have begun cracking down on RVs, trailers and vans illegally parked on streets. Recently, Squamish passed bylaw changes that would prevent people from spending the night in their vehicle in certain public spaces.

“There’s people that live in vehicles because they just can’t find housing,” said Thomasina, who is the co-director of the vehicle residents of Squamish advocacy group fighting the bylaw. She believes all people need to be protected from these discriminatory bylaws, especially the more vulerable.

Karen Elliott, the mayor of Squamish, says the amendments are to manage the tourist population and not aimed at long-term vehicle residents.

“For Squamish, our overwhelming challenge is the thousands of people who come often, and (with) pretty tricked out vans. … So we do attract a lot of visitors and that’s what we’re trying to manage,” Elliott told Global News.

She added that the city recognizes it’s been challenging for some members of the community to find housing. “We have a very low rental vacancy rate. Affordability is an issue here and we’re working really, really hard on that.”

Elliott says she hopes the bylaw changes will encourage visitors to sleep at campsites. This is also an option for vehicle residents.

“Our more permanent van sleeping residents would say these bylaws are targeting them. We disagree. We’re really focused on visitors who don’t know our community, don’t know that they’re creating conflict,” Elliott said.

As for Pidgeon, she says she’s not going to abide by the bylaws. She loves her home and plans on living in her van indefinitely.

“The bylaw still targets anybody who sleeps in the vehicle, a local resident or not, which to me is a huge problem,” Pidgeon said.

She also says with the number of people choosing or needing to live in vans, cities and towns need to adapt and accommodate.

“I think the bylaws and the laws in general need to reflect this growing reality that a lot of people are choosing vehicles as homes and it’s a trend and it’s not going away.

“I wish that people would just be more open-minded and not be so judgmental to a different way of living that is actually pretty minimal and simple to me — it’s a beautiful lifestyle.”

8-Year-Old Boy’s Family Is Down to Their Last $12 Living in a Shed – Until His Own Business Saves Them All
How to Show Up When Nothing About Your Life Is Perfect
Why I Didn’t Trust Myself to Make Decisions (and What If It’s All Okay?)
If You’re Feeling Judged: One Thing You Need to Understand
‘It was my heart’: Women with heart disease face barriers to care in Canada, report says