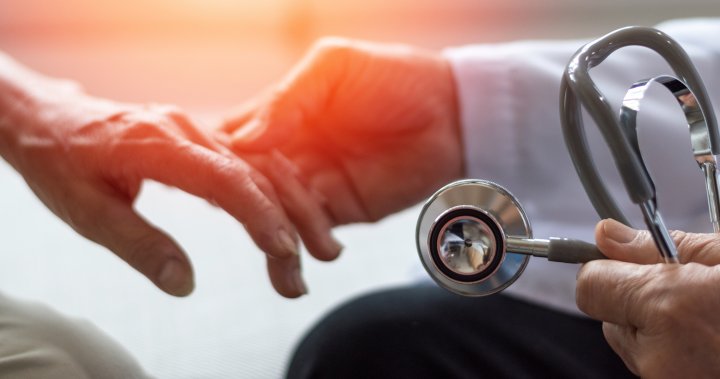 The number of people affected by Parkinson’s disease has doubled in the last 25 years and is on track to double again by 2040, making it the fastest-growing neurological disorder in the world. More than 100,000 Canadians live with Parkinson’s and 25 more are diagnosed every day.

Parkinson’s is a brain disorder that causes difficulty in movement. People affected experience a decrease in dopamine, causing tremors, slow and rigid movements and a loss of balance.

Ray Dorsey, a professor of neurology at the University of Rochester and author of Ending Parkinson’s Disease, recently joined The Morning Show to discuss how Canadians can best protect themselves.

Read more:
Larry Gifford — Parkinson’s disease is no barrier to joy in life

Dorsey says Parkinson’s is so prevalent that he considers it a pandemic.

The Mayo Clinic says that the exact cause of Parkinson’s disease is unknown, but several factors appear to play a role, including genes and environmental triggers — but the latter is a relatively small risk. Still, over the last decade, several studies have found a connection between Parkinson’s disease and pesticide/chemical exposure.

“Every part of the world is affected,” Dorsey says.

In this country, Parkinson’s affects one in every 500 people, and Canada has the highest rate of Parkinson’s in the world.

Dorsey says the reasons for the disease’s rapid growth are unknown.

“But if you look at the environmental risk factors that are tied to Parkinson’s disease, they are common in Canada.”

Pesticides like paraquat — primarily used to kill weeds — and chlorpyrifos, which is used for insects, are commonly used in the U.S. and Canada, Dorsey says. Additionally, over 50 per cent of Canada is cropland, according to 2014 Statistics Canada data, and almost two per cent of Canadians are farmers, he adds.

The most effective treatment for Parkinson’s was developed over 50 years ago and Dorsey says treatment is stagnant because of a lack of better measurements.

For example, if you’re treating heart disease and want to see if a diet or exercise program would improve your condition, you’d measure your blood pressure or have your cholesterol checked, he says.

“In 2021, we’re still measuring Parkinson’s disease by having people tap their thumb and index finger and having people rate that on a scale,” Dorsey says.

“We need better measures of Parkinson’s disease so we can get better treatments for the 100,000 Canadians who currently have (it).”

Cures are hard to come by, but prevention is a lot more attainable, he says, adding that we don’t have a cure for lung cancer but we know we can help prevent it if we stop smoking.

For more information on Parkinson’s disease in Canada, watch the full video above.

New Barbie Doll Honours First Black Aviator — Inspires Youth to Take to the Skies (PHOTOS)
All the Things I Didn’t Tell the Men I Dated Because I Was Afraid
How to Show Up When Nothing About Your Life Is Perfect
How I Stopped Feeling Embarrassed and Ashamed of Being Single
Femcels: Inside the enigmatic subculture of involuntary celibate women