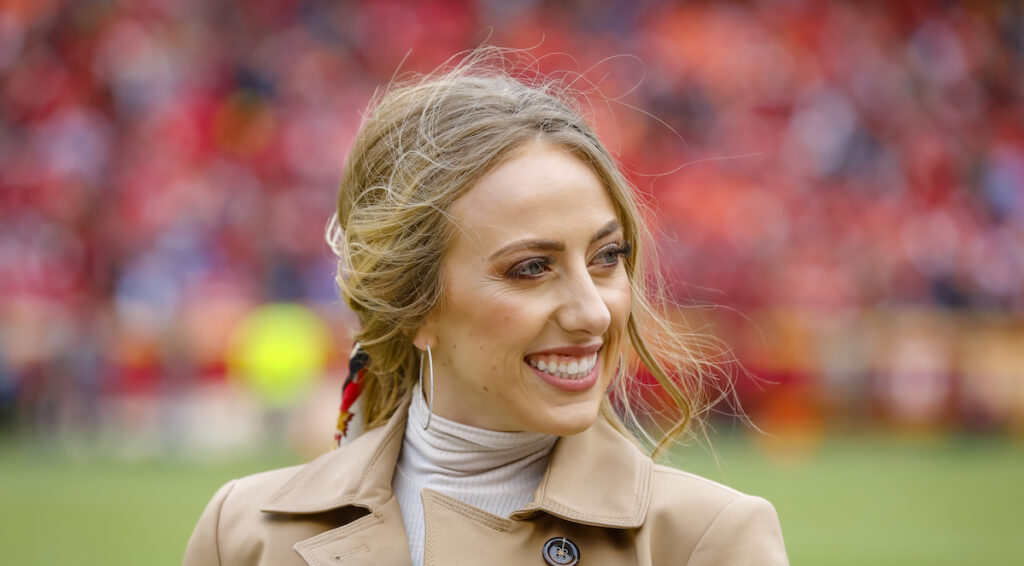 In just a few short years, Patrick Mahomes of the Kansas City Chiefs has become the toast of the NFL.

At just 25, he has already built a reputation as one of the best, most dynamic, and skillful players in the league. He led the Chiefs to an enormous victory against the San Francisco 49ers in Super Bowl LIV and is set to lead the charge yet again this year against Tampa Bay Buccaneers. With two Super Bowl appearances in as many years, the odds are certainly in favor of the young Texan athlete.

Patrick’s rapid emergence to the top of the football pyramid has generated a high level of interest in his personal life. There’s no doubt that such a beloved athlete would have a swarm of gorgeous ladies lining up at the door, but Patrick doesn’t need to bother with any of their advances.

The man only has eyes for one woman. So as we prepare to see him throw exhilarating touchdown passes on the field, let’s take a closer look at the woman keeping him sane amidst the chaos and the fame.

Normally you’d expect athletes to chase after supermodels or influencers, but Patrick has kept it real by sticking with his high school sweetheart through and through. Patrick and Brittany Matthews started seeing each other as students at Whitehouse High School in Whitehouse, Texas.

But not long after, the two went off to different colleges to pursue their respective fields. Brittany went off to play college soccer and study kinesiology at the University of Texas in Tyler, whereas Patrick, who graduated from high school a year later, moved to Lubbock, Texas, to play college football at Texas Tech University. The two towns were 440 miles away, which means the young couple had to give their all to make long-distance work.

In April 2017, Patrick was drafted by the Kansas City Chiefs and moved to Missouri. At the same time, Brittany graduated from college and moved to Iceland to play soccer professionally at a club called UMF Afturelding/Fram. She called this move “an amazing experience to go do what I love.”

She remained in Iceland for about six months — she won the league with the team and then moved to Kansas City to be with her beau. While playing in Iceland, Brittany realized her passion wasn’t in sport but fitness.

Patrick works his a** off and is at the facility from 6 a.m. to 6 p.m. every day. There’s no excuse for me to be sitting on my butt at home doing nothing or not making a difference in this world or not being successful. I feel like we’re a team.

In 2019, Brittany founded her fitness company Brittany Lynne Fitness, where she offers training exercises, fitness regimens, and workout gear and merchandise. Her site’s About page reads that playing sports professionally has taught her all about “strength training, wellness, maintaining peak fitness.” So it’s safe to say that Patrick and Brittany bond over a number of passions, not least of which is fitness and athletics.

Having held on to their relationship through the long distances and their early careers, it was only time before Patrick sealed the deal with a ring on Brittany’s finger. He did so after receiving his Super Bowl championship ring in a ceremony. According to Brittany, a section of the Arrowhead Stadium at their home ground in Kansas City had been closed off and decked out in roses. A sign reading “Will You Marry Me?” sat at the forefront of the entire flower arrangement.

Patrick later revealed in a radio show that proposing to Brittany was more nerve-wracking than winning the Super Bowl.

You don’t think it’s going to be nerve-racking when you’ve been with someone for so long, but before you get on that knee, man, your heart’s racing. I promise you that.

He also admitted that his teammates had helped him out with the proposal. Afterward, Patrick and Brittany shared a lovely candlelit dinner, the photo of which Brittany captioned as “My heart is so full! I love this man so incredibly much, and today was so so special!”

They’re expecting a baby girl soon, but Brittany “freaked out” about the pregnancy at first

Less than a month after proposing, Brittany and Patrick announced that they’re taking a “detour” to the aisle and are expecting a baby. Brittany went on an Instagram Q&A to share details about the pregnancy and how they found out. She said that they weren’t actively trying for a pregnancy, so she took two tests after realizing she was late on her period. When the tests turned up positive, Brittany said she freaked out and started panicking.

I started crying and freaking out. [Patrick] was just so sweet and supportive and just so excited about it […] Yes, I was terrified, and no, I did not expect it at this point in my life but everything happens for a reason. Ultimately, this is one of the biggest blessings we will ever have.

Patrick himself has said that he’s “excited” to be a father and to be experiencing both fatherhood and football superstardom at the same time in his life. He said he wants to continue growing and being a better person for his family.

I think it’s just about growing up, about having the responsibility and evolving as a family. I think we’ve done that — me and Brittany, and the people around me — and I’m just excited for the future ahead of being able to keep building and keep becoming a better person for my family and this world.

Sometimes the long distances are well worth your time

Patrick and Brittany never lost their love for each other despite going off in different directions after high school. They knew that if their love were true and resilient, it would survive the long distances and the extensive time apart. Brittany was there for Patrick before he made it big; she’s seen through it all.

The media portrays her as the overenthusiastic girlfriend who’s always screaming at games and cheering on her man, who’s always posting her opinions and commentary on Twitter, who’s willing to defend her fiancé at any given moment, but she’s steadfast in her support and love. And he undoubtedly shares her same enthusiasm for her own passions. Patrick Mahomes may be winning games on the field, but he’s also won at home.

Sometimes it’s worth it to go through the longing, the pain, the loneliness of a long-distance relationship if it means there’s a brighter future to look forward to. Perhaps the future isn’t guaranteed, but you might be surprised how much absence makes the heart grow fonder.

Kentucky Woman Gets Unbelievably Lucky at Her Office’s Christmas Gift Exchange — Now She Can Afford to Send Her Kids to College
Tough Times Don’t Last (Official Music Video) Fearless Motivation
‘It was my heart’: Women with heart disease face barriers to care in Canada, report says
8-Year-Old Boy’s Family Is Down to Their Last $12 Living in a Shed – Until His Own Business Saves Them All
New Barbie Doll Honours First Black Aviator — Inspires Youth to Take to the Skies (PHOTOS)