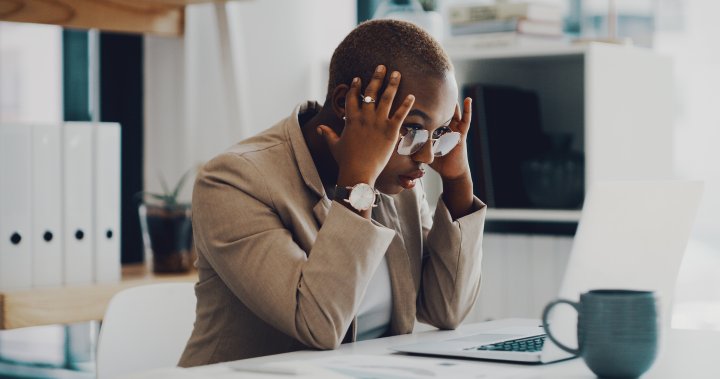 Last year, when Lauren Parkes — a Toronto resident with attention deficit hyperactivity disorder (ADHD) — was faced with COVID-19 restrictions and lockdowns, her symptoms were aggravated.

She lost awareness of time and she struggled with impulsive and disordered eating.

Read more:
ADHD in adults can be life-threatening when left untreated: experts

When she applied for Employment Insurance (EI), she made an error that resulted in her waiting on the phone for hours.

“Things like paperwork… (are) very difficult for people with ADHD because (they are) so detail-oriented,” she says.

ADHD is a neurodevelopmental condition characterized by someone’s ability to regulate attention, which can include inattention as well as hyperfocusing.

People with ADHD benefit from structure and routine, experts say, and the conditions caused by the COVID-19 pandemic have only exacerbated symptoms.

Additionally, things like filling out EI forms or booking a vaccine can be difficult because they require patience and persistence — which isn’t a strength for those with ADHD — says Heidi Bernhardt, the founder of the Centre for ADHD Awareness Canada (CADDAC).

Bernhardt says she recently received an email from someone trying to book a vaccine for themselves.

“The way these things were set up (are) almost anti-ADHD because you have all of these steps,” she says.

A 2020 study done by the Journal of Attention Disorders found that people with ADHD — especially if untreated — are more vulnerable to COVID-19 infections; impulsive behaviour and hyperactivity can deter people from complying with restrictions and regulations.

On Thursday, CADDAC and The Canadian ADHD Resource Alliance (CADDRA) called upon provincial governments to include people with ADHD among vaccination priority groups.

Though some provinces have included some neurodevelopmental disorders in their plans, Alberta has specifically excluded people with ADHD. Bernhardt says CADDAC is unsure as to why they’ve been left out.

(Global News has reached out to multiple sources questioning why people with ADHD are excluded from Alberta’s plan, and none responded back with an answer by publication.)

“It’s a bit of a nightmare for our population,” she adds, “because then you throw in that difficulty with trying to navigate the sites and yeah, they’re struggling.”

Read more:
Signs your child has ADHD and what parents can do to help

Bernhardt says though there isn’t much research on how many Canadians have ADHD, many people are still being left undiagnosed and untreated.

“When this happens, incident rates of anxiety, depression, substance abuse (and) eating disorders all increase,” she adds.

Tyler Luptak, a 29-year old living in Thompson, Man., was previously diagnosed with anxiety and depression.

At the beginning of the year he was experiencing frequent migraines and panic attacks, and he says his medication and grounding techniques were no longer working.

“I wasn’t able to properly focus on my work,” he says. “Many times, I left tasks uncompleted or (didn’t) even start them.”

“After being diagnosed, I realize this is something I must have had for a while now,” he says.

According to a survey published in March by ADDitude, 26.5 per cent of respondents said they received a formal ADHD diagnosis within the past year.

Elisabeth Hall, the medical director of the Vancouver Coastal Health Adult ADHD Clinic, says COVID-19 has become a “great clarifier” and now that people are stuck at home — without external distractions — they might have more clarity as to what they’re experiencing as ADHD.

“This might be the time that people start seeking out treatment,” she says.

Similarly, Bernhardt references a mom who began working from home and homeschooling her kids during the pandemic.

Though the situation isn’t ideal for anyone trying to focus and stay organized, she got an assessment and received an ADHD diagnosis.

“She might never have discovered it without being forced to slow down and be at home because of COVID-19,” Bernhardt says.

Read more:
Cases of ADHD diagnosed in adulthood are on the rise, study suggests

Parkes, the Toronto resident who experienced aggravated symptoms during the beginning of the pandemic, says there is a silver lining. She says the COVID-19 lockdowns have allowed her time to focus on things like sewing, painting, embroidery and making masks for friends and family.

For two years, Parkes had been signed up for a support group that she never attended due to the long commute.

Now, she’s able to connect with other people who have ADHD virtually, and she says hearing their stories has been affirming for her, so much so that she has run three of the support groups for ADHD Toronto.

“It really gave me an opportunity to hear other people’s stories … because before, I was just living in my own life experience,” Parkes says.

She’s also going to be speaking at the Women’s ADHD Empowerment Festival later this month.

Read more:
Young moms are more likely to have children with ADHD: study

Jennifer Cho, another Toronto resident who has attended the ADHD Toronto support group, says she dedicates much of her time to volunteering, trying to alleviate the stigma surrounding ADHD.

“The sad thing is when I told people I had ADHD as an adult, (some) of my friends looked down on me,” she says, adding that she was encouraged not to tell employers in case they would think she was lazy or would get distracted easily.

Better understanding her condition has empowered her, Cho says, and her diagnosis came to her as an “amazing relief.”

“My sense of self, self-confidence, (and) self-esteem is so much better since I started this journey.”

Read more:
ADHD awareness week: what one family wants you to keep in mind

Cho says she uses Focusmate, an app that connects people virtually as “coworkers,” so she can have an accountability partner while she completes a task.

Hall says though the ideal treatment for ADHD is a combination of medication and cognitive behavioural therapy, things like self-care, compassion and connection are just as important, especially right now.

Louisiana Woman Gives Free Wigs to Children Suffering Hair Loss — Their Reactions Will Warm Your Heart
How to Make Things Better When It Seems Like Everything Is Going Wrong
Woman Finds Her Elderly Neighbor Living in a Destroyed House – Decides to Takes Matters Into Her Own Hands
This Year, Let Go Of The People Who Aren’t Ready To Love You
How to Un-Stub Your Toe on the Nail of Life | Eric Bailey Motivational Speech | Goalcast