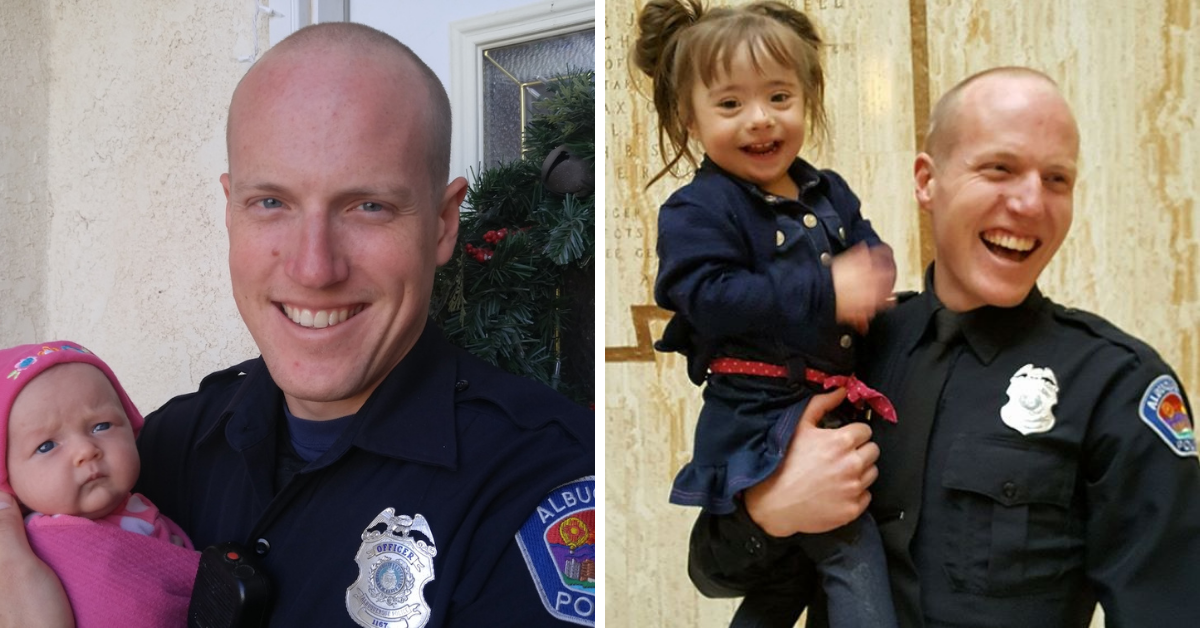 When police officer Ryan Holets spotted two heroin addicts shooting up behind an Albuquerque convenience store, he had no idea that he’d have an overwhelming urge to adopt the pregnant woman’s baby, but that’s exactly what he did.

Holets was responding to a suspected theft at a convenience store when he spotted a man and woman behind the shop looking like they were about to shoot up.

Then, Holets, who was wearing his body camera, noticed that the woman, Crystal Champ, was pregnant.

“It’s not every day I see a sight like that and it just made me really sad,” he told CNN.

Champ, 35 told Holets she was eight months pregnant and desperately wanted someone to adopt her baby.

“You’re going to kill your baby,” Ryan says. “Why do you have to be doing that stuff?” It’s going to ruin your baby.”

At first, Champ, who had been experiencing homelessness for two years and struggled with addiction for much of her life, was defiant.

But then she looked at the police officer’s eyes and saw kindness.

“He became a human being instead of a police officer.”

He made a spontaneous decision

Holets decided not to charge the couple for drug possession and while showing them a picture of his wife and 10-month-old he offered to adopt the baby.

“I was led by God to take the chance,” Holets said.

“God brought us all together. I really don’t have any other way to explain it.”

The thing was, Holets hadn’t told his wife Rebecca about it, so he drove to go meet her. Fortunately, she agreed right away. The couple already had four children and had been wanting to adopt another baby at some point in the future.

“He already knew my heart on the issue and he knew that I would be totally onboard with it,” Rebecca told CNN.

Hope was born addicted to opioids

Less than a month later, Champ gave birth to a baby girl and handed her over to Rebecca.

Opioid-addicted babies are born every 15 minutes in the US, according to the National Institute on Drug Abuse.

Doctors had to ween the baby off the addition her mother passed on to her with morphine and methadone.

But the future didn’t look so good for Champ after her daughter was born. She herself was given up for adoption and struggled with addiction throughout her teenage years. She’d tried to break her habit, but couldn’t.

“I did give up. I just decided this was going to be my life,” said Champ, who was living in a tent alongside the article when the story was first published. “It just keeps coming back and ruining my life.”

Champ said she’s happy her baby can grow up in a safe, stable, environment with the Holets family, who has agreed to keep the birth parents part of Hope’s life.

“There needs to be more people like Ryan and his wife and their family in this world,” she said.

There is no blame that can be placed in this story, only sadness and yes, hope. Opioid addiction continues to rob so many of their lives, but there are countless people such as frontline workers and people like Holets who are helping.

Not all of us are able to adopt a baby from an opioid-addicted mother, nor is that always the solution to help them, but this generous act is a reminder to do more whenever possible — instead of judging.

Haute couture goes ‘surreal’ and upside-down at Paris fashion show
Struggling Single Mom Is Summoned to Courtroom – Judge Issues Her a $350 Fine but Then Changes His Mind
7 False Beliefs That Will Keep You Trapped in Your Head Forever
The Single Greatest Mistake A Man Can Make | Jordan Peterson
‘Gen Z yellow’: Next ‘it’ colour or marketing ploy?