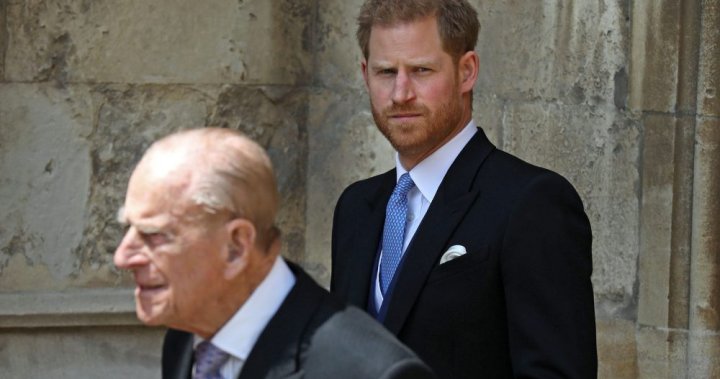 Prince Harry mourned his grandfather, Prince Philip, as a man of “service, honour and great humour” on Monday, after returning to the United Kingdom for the Duke of Edinburgh’s upcoming funeral.

Harry paid tribute to his grandfather as a witty, charming and devoted man, in a lengthy statement posted on his Archewell Foundation website. The statement was posted one day after Harry returned to the U.K. alone, leaving his pregnant wife Meghan Markle and their child, Archie, in California.

Read more:
Prince Philip, the Duke of Edinburgh, dies at 99

Harry hailed his grandfather for his devoted service to the Queen, and for always being himself.

“To me, like many of you who have lost a loved one or grandparent over the pain of this past year, he was my grandpa: master of the barbecue, legend of banter, and cheeky right ‘til the end,” Harry wrote in his statement.

He added: “You will be sorely missed, but always remembered — by the nation and the world. Meghan, Archie, and I (as well as your future great-granddaughter) will always hold a special place for you in our hearts.”

The statement came after The Archewell Foundation posted a much shorter acknowledgement of Philip’s death on Friday.

Harry flew to the U.K. from California on Sunday, two days after the death of his 99-year-old grandfather, the Duke of Edinburgh, Reuters reports. Markle stayed behind on the advice of her doctor, Buckingham Palace said.

Prince Harry immediately went into coronavirus quarantine so that he can be part of the funeral service at Windsor Castle on Saturday, April 17.

The trip marks Prince Harry’s first visit to his home country since he and Markle left the Royal Family in early 2020.

It also comes on the heels of the couple’s bombshell interview with Oprah Winfrey, in which they ripped the “toxic” British media, accused the Royal Family of failing to protect them and alleged that someone in the family had asked about Archie’s potential skin colour before he was born. Winfrey later said that Queen Elizabeth II and Prince Philip were not involved in that conversation.

The interview aired a few days after Philip was admitted to hospital in early March. The Duke of Edinburgh ended up spending several weeks in hospital. He was ultimately discharged and later died at home.

Harry’s brother Prince William, who is second in line to the throne, issued his own full statement about his grandfather’s death on Monday.

“My grandfather’s century of life was defined by service — to his country and Commonwealth, to his wife and Queen, and to our family,” the statement read, in part. “I feel lucky to have not just had his example to guide me, but his enduring presence well into my own adult life — both through good times and the hardest days.”

William spoke at length about having Prince Philip involved in the lives of his wife and children. He added that he will miss his grandfather, “but I know he would want us to get on with the job.”

Philip is lying at rest in the Private Chapel at Windsor Castle ahead of Saturday’s funeral.

— With files from Reuters

If You’re Feeling Judged: One Thing You Need to Understand
The World’s Best Blind Mountain Biker | Brian Bushway | #shorts
8-Year-Old Boy’s Family Is Down to Their Last $12 Living in a Shed – Until His Own Business Saves Them All
Kentucky Woman Gets Unbelievably Lucky at Her Office’s Christmas Gift Exchange — Now She Can Afford to Send Her Kids to College
Service Dog Stays at Hospital With His Owner 24/7 — While Nobody Else Was Allowed to Stay