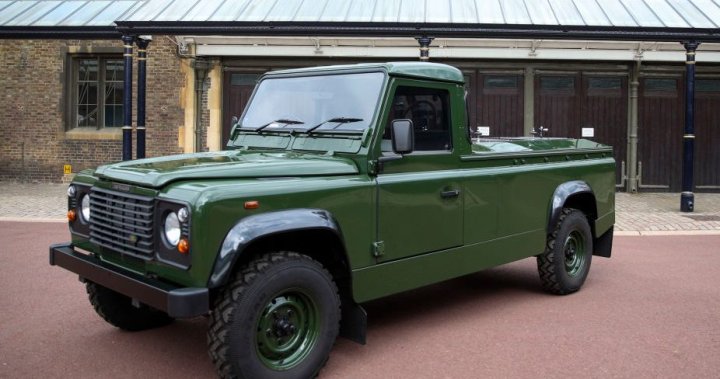 Prince Philip will ride in military class before he rests in peace on Saturday, thanks to a customized Land Rover hearse that he designed for his own funeral.

Buckingham Palace revealed photos and details about the Duke of Edinburgh’s last ride ahead of his weekend farewell. The hearse will be part of the funeral arrangements, which follow Philip’s death at the age of 99 on April 9.

The vehicle is a simplified Land Rover TD5 130 painted a military shade of dark bronze-green, with an open-top section on the back to hold his coffin.

Buckingham Palace says the vehicle was built at the Land Rover factory in Solihull, England, in 2003, and was modified several times over the years. The last round of changes was implemented in 2019, though the vehicle was kept ready for many years leading up to Philip’s death.

His Royal Highness helped design the Land Rover which will carry his coffin.

The vehicle will be driven by soldiers from the Royal Electrical and Mechanical Engineers of which The Duke was Colonel-in-Chief. pic.twitter.com/YDVgbBF29X

The vehicle’s stripped-down, military look echoes Philip’s own past as a former naval officer. He served in the British Royal Navy during the Second World War and participated in the battles of Cape Matapan and Crete in 1941, six years before he married then-Princess Elizabeth.

Thierry Bollore, Land Rover’s chief executive, said that the company was “deeply privileged” to have worked with the prince, who visited company sites over the years and met hundreds of the company’s employees. The company was “honoured” that one of its vehicles would be used at the funeral.

Land Rovers have been the vehicle of choice for the Queen and the Duke of Edinburgh for decades.

On Saturday, the Land Rover hearse will carry Philip’s coffin in a procession at Windsor Castle, while members of the Royal Family will follow behind. He will ultimately be laid to rest in St. George’s Chapel.

“The Duke of Edinburgh was closely involved in the planning of his own funeral,” the Royal Family tweeted on Friday. “As a result, it will involve a number of unique touches which reflect his life and work.”

The palace says that Philip chose to include the military in many aspects of the funeral, in order to “demonstrate his lifelong commitment to the Armed Forces.”

Buckingham Palace announced on Friday that the guest list would consist of 30 people. Nearly everyone on the list is a member of the Royal Family.

—With files from the Associated Press

The royal funeral will be held at St George’s Chapel on the grounds of Windsor Castle at 15:00 BST (10:00 ET) on Saturday, April 17. You can watch live on the Global News app or at GlobalNews.ca.

How a social media group dubbed Mom Jeans is helping people fight inflation
If You’re Feeling Judged: One Thing You Need to Understand
‘It was my heart’: Women with heart disease face barriers to care in Canada, report says
These Letters from a Single Mother Will Make You Believe in Love Again | Philicia Baugh | Goalcast
Podcast: What to know about “novelty hunting.”