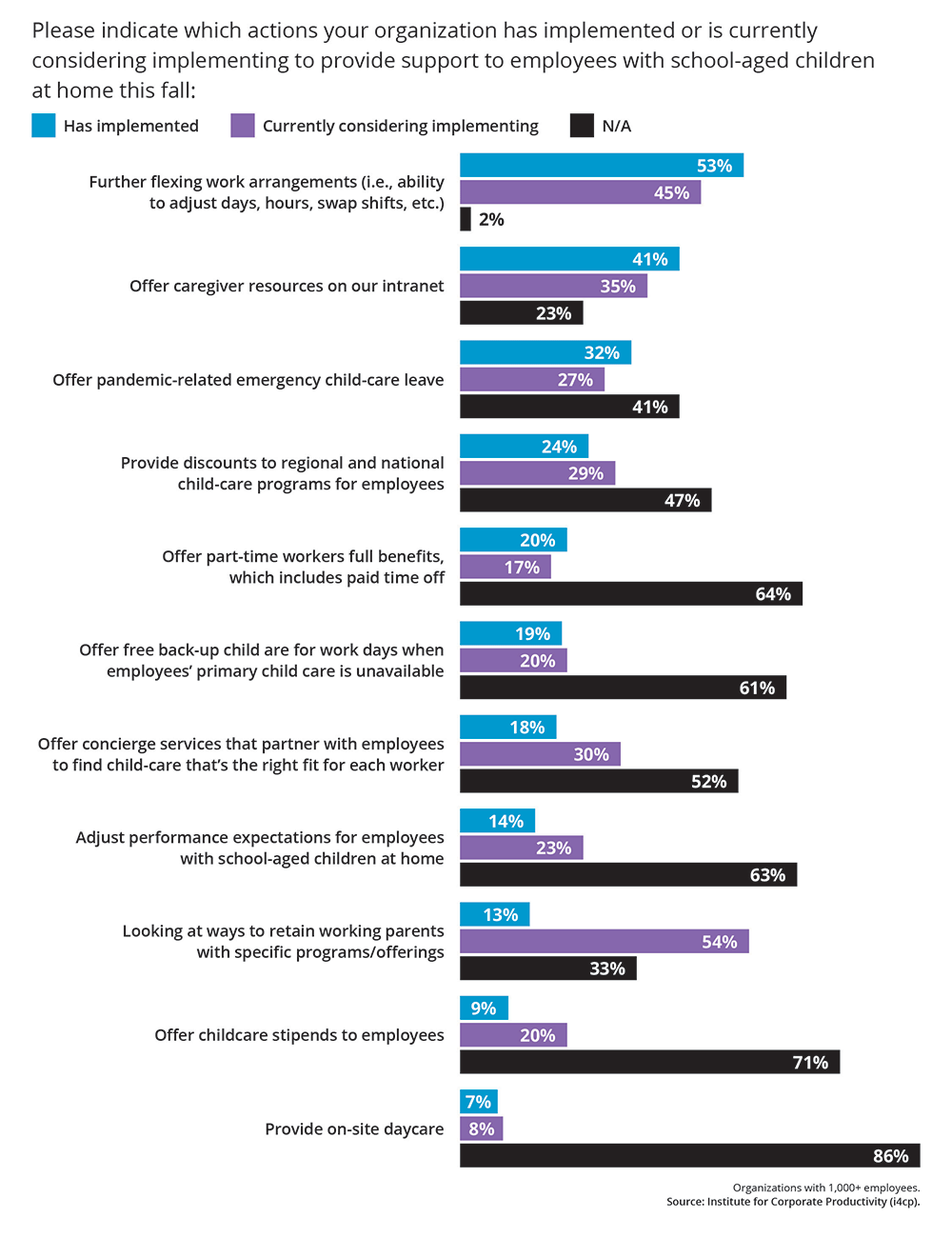 A flurry of news coverage followed publication of the Bureau
of Labor Statistics’ September jobs report, which found that 865,000 women left
the labor force from August to September. In contrast, 216,000 men left the
workforce during the same timeframe.

Adding to the alarm, analysis
of the BLS data by the National Women’s Law Center noted that of those 865,000
women who exited the work force, 324,000 were Latinas and 58,000 were Black
women. Further, of the nearly 22.2 million jobs lost in the U.S. in March and
April due to the COVID-19 pandemic, only half have returned.

This comes as no surprise to us at the Institute for
Corporate Productivity (i4cp); we’ve been tracking the issue of talent risk in
the form of women leaving the workforce since well before the pandemic
began.

As we noted in early August (“Employers
Are at Risk of Losing Talent as Women Bear the Brunt of the Pandemic”), our
research found that a little more than half (52%) of the 275 professionals we
polled reported that more women than men have expressed concern about their
ability to continue with their employment due to the need to homeschool
children in the fall; 42% said that more women than men in their organizations
had requested support resources to help meet childcare needs. And 7% said that
more women than men had already voluntarily left their organizations due to the
pandemic and related stressors.

It’s not a mystery as to why women are leaving the labor
force right now. The jobs lost due to COVID-19 were disparately in fields
dominated by women. And certainly, there are innumerable concerns and stressors
driven by the ongoing march of the pandemic to include eldercare, but
overwhelmingly the current exodus is about homeschooling and childcare
pressures.

And it’s obvious that what could help to remedy at least some
of this is a 21st Century version of the 1940
Lanham Act, which provided war-related government grants for childcare services
in every state in the U.S. except for one. At the time, it was viewed as an
experiment in universal childcare. The argument could easily be made that the
experiment helped to win the war.

Rosie the riveter: A cultural icon created in part by
expansive childcare services

The Lanham Act led to the creation of the first U.S.
government-sponsored childcare center. In addition to using federal and local
public funds for childcare initiatives, President Roosevelt also pushed for
other new workplace strategies to include flexible work arrangements and staggering
working hours. He also asked for flexibility from businesses to enable working
mothers to go grocery shopping or do their banking at special hours.

The federal government also indirectly supported private
employer-sponsored childcare during WWII. One example: several state-of-the-art
childcare centers capable of serving more than 1,000 children of workers at the
Kaiser Shipyards. Parents paid a nominal fee (about $9 a day in today’s
dollars), and in addition to being affordable, the care was high-quality. Centers
had low student-teacher ratios, served meals and snacks, and taught children
arts and educational enrichment activities. Most of program operating
expenses, including the cost of trained staff, was absorbed by the federal
government—this was written into Kaiser’s
defense-related contracts.

By the time the war ended, over six million women had become
part of the U.S. labor force, helping to build the planes, tanks, ships, and
other equipment that enabled victory for the Allies. They would not have been
able to do so without affordable, quality childcare. Without it, we wouldn’t
have the enduring persona of Rosie the Riveter, the ultimate team player,
patriot, and breaker of barriers.

But after the war, the centers were soon closed, and women
were encouraged to return home to make way for returning veterans who needed
jobs.

Women were leaving the workforce well before COVID-19

The exodus of women from the U.S. labor force in recent
years is not a new thing. Data from the Global Entrepreneurship Monitor found
that in 2018, women made up 40 percent of new entrepreneurs in the U.S.—the highest
percentage since 1996.

Factors of educational attainment, labor force
participation, and pay inequity combine to make this a complex issue. And it’s
a huge talent risk issue for corporations. Consider the fact that women are the most educated cohort
in the U.S., but we consistently hit thresholds in our professional
growth that we cannot seem to cross, particularly in making the important move
up from middle to senior roles. So, women are more likely to strike out on
their own and become entrepreneurs. Bureau of Labor Statistics’ data shows that
women have been leaving the workforce in increasingly large numbers and this is expected to continue through 2026 (which is when current labor projections end).

Is it time for employers to step
into the ever-widening void?

In the continuous pulse surveying i4cp has been doing since
the start of the pandemic, we have asked about what organizations are doing to
support working parents. The most common strategies are the usual—flexing work
schedules, posting a variety of resources and other information to the
company’s intranet, and expanding leave policies. But employers aren’t looking
at taking more aggressive steps—just 8% of employers polled reported that were
considering offering on-site childcare.

What is happening right now in terms of women in the workforce
who are trying to perform under unimaginable stress, being forced to leave the
workforce, and the corresponding regression of advancements made in pay and
opportunity equity feels like the awful, multi-pronged rolling catastrophe that
it is. This will affect culture—both at work and in the broader community for a
long time to come.

And if that’s not enough to worry about, as Time reported in
its September story, “COVID-19 Has Nearly
Destroyed the Childcare Industry—and It Might Be Too Late to Save It,”
childcare businesses are not able to survive the decreased enrollments and
increased costs of operating due to the pandemic.

Hundreds have closed, and even if the Child Care Stabilization
Fund bill currently in discussion were to pass (it passed in Congress, but is not expected to be passed by the
Senate), experts say it won’t be enough to save centers that are hanging by a
thread.

All of this feels like a wartime situation. With nearly a
quarter of a million deaths in less than a year in the U.S. due to COVID-19,
how can we not approach this as if we are under siege? It is a siege that calls
for leadership, for innovation, and investment. It calls for employers to do
more.

What was learned from the Lanham Act is that investment in
quality, affordable childcare helped to expand employment. And follow-up
research found that the experience increased children’s educational attainment
and future earnings.

Pandemic aside, in an era in which the cost of childcare can
rival that of college tuition in some regions, revisiting the spirit of the
Lanham Act is an idea worth exploring for employers that are looking
realistically at the future and their ability to retain the talent they need to
move forward. Some possible solutions for the challenges ahead may be found in
the past.

Sweet Revenge: Woman Wins Lottery Jackpot After Husband Leaves Her for Best Friend
Quordle: Hit Wordle-style game finds B-U-Y-E-R in Merriam-Webster
Slow mornings lead to deliberate days
Louisiana Woman Gives Free Wigs to Children Suffering Hair Loss — Their Reactions Will Warm Your Heart
This Is How You Become the Best Version of Yourself in One Step | James Lawrence | Goalcast