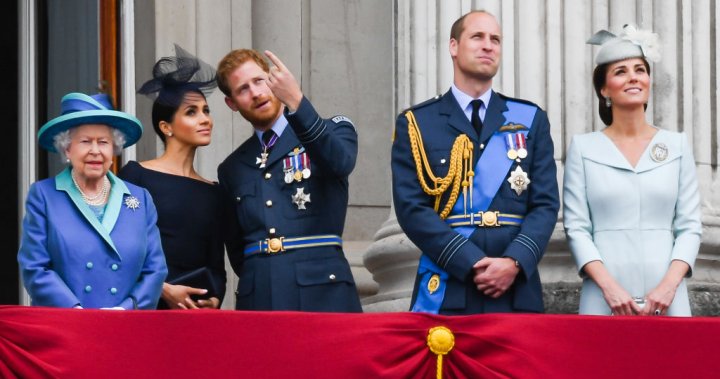 The generational parallels between Royal Family members have been a topic of discussion for many, and naturally so, since the similarities can be striking.

When comparing siblings, Queen Elizabeth and Princess Margaret were very much like Princes Harry and William by the support they provided one another, says royal biographer Andrew Morton.

Morton recently joined The Morning Show to talk about the Royal Family and his latest book, Elizabeth & Margaret: The Intimate World of the Windsor Sisters.

Morton, just like many others, has drawn comparisons between Meghan Markle and the late Princess Diana.

Morton says watching the interview was like “being put into a time machine.”

“It reminded me so much of what Diana used to say, talking about her sense of isolation, her loneliness, the fact that she wasn’t being helped and the words were virtually identical.”

Morton adds that he was surprised by Markle’s claim that the Royal Family wouldn’t get her the help she needed for her mental health, especially considering Harry’s godmother is well-known psychotherapist, Julia Samuel.

“Mental health is talked about inside the Royal Family,” he says, adding that Margaret received help from a psychotherapist in London when she needed it.

5:20
Learning how to adapt to constant change

When it comes to reconciling Harry and William’s relationship, Morton says it will be dependant on time.

“Harry has been with William through the really difficult times of their lives and also through the good times,” he says.

However, he adds, there has been “considerable damage” caused to William and Prince Charles from Harry’s claims.

“This is the first time possibly in history that a prince of the realm has launched a direct assault on the institution from which he sprung,” Morton says.

After Harry and Markle’s departure, there have been some questions over the future of the monarchy, Morton adds.

“When you’re the heir, the path is mapped out for you,” says Morton, adding that the coronation was built around Queen Elizabeth.

“But for Margaret, she was left to her own devices.”

7:59
Would Will and Kate ever do their own interview? Royal expert breaks down latest headlines

Would Will and Kate ever do their own interview? Royal expert breaks down latest headlines – Mar 23, 2021

When their father, George IV died, Margaret was bereaved, Morton says, taking to tranquillizers and drinking. Elizabeth, who was also coping with her new role as Queen, was concerned for her sister, he adds.

“And (Margaret) was kind of lost and alone for quite a long time in her early career inside the Royal Family.”

The Crown, a Netflix original TV series by Peter Morgan, is a period drama portraying the romances and political rivalries during Elizabeth’s early reign.

Morton says the series can be a strikingly close depiction of the lived reality, however, there is one storyline they got wrong.

In The Crown, when Margaret expresses her wish to marry the divorced commoner, Peter Townsend, Elizabeth refuses her, saying she must carry out her royal duties. In response, Margaret says no, expressing her love for Townsend.

This creates a great conflict between the sisters in the series.

“It’s been built as the romance of the century,” Morton says.

“Actually, there was no conflict between the sisters. The Queen was prepared to have the monarchy attacked in order for her sister to enjoy the happiness that she wanted,” he adds.

While Peter Townsend was left outside the palace, Margaret, the Queen and the prime minister were inside, working out a package so that Margaret could keep her title and still get Civil List payments if she wanted, Morton says.

“But she decided against. So I think she just fell out of love with him.”

Morton adds that the monarchy would have been more “metropolitan” if Margaret would have ended up being queen.

As a journalist, Morton says he’s glad Markle and Harry went public with their experiences, however, he adds there are concerning discrepancies in their interview with Winfrey.

He points to the couple saying they were married three days before the ceremony as well as Markle’s car keys and passport being taken away.

“Meghan and Harry have decided to go public because they didn’t feel like Archie (their son) was getting the kind of security they wanted, but there’s an awful lot of loose ends,” he says.

For more on the Royal Family and Andrew Morton’s newest book release, watch the full interview above.