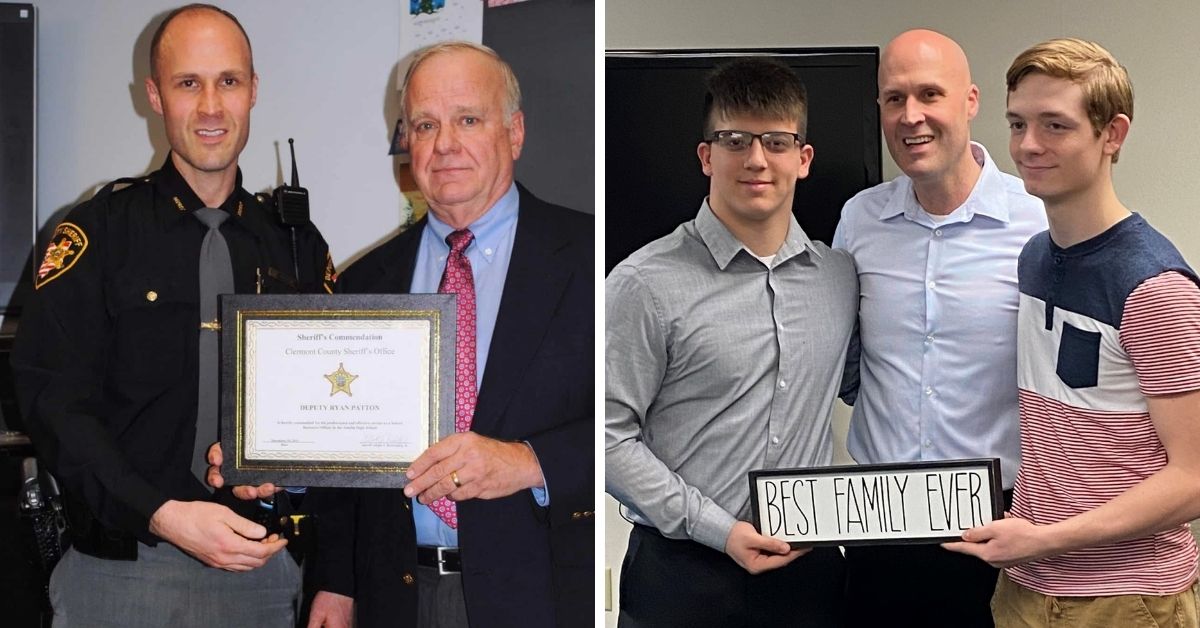 Ryan Patton works as a school resource officer. He has spent his whole career working with and supporting his students almost as if they were his own family.

But, now, he has literally become a dad to two of them. This amazing change happened after Ryan adopted two of his teenage students this year, creating an instant family.

According to a release from government officials in Clermont County, Ohio, Patton has served as a school resource officer for the Clermont County Sheriff’s Office for the past 12 years.

While working as a school resource officer in September of 2016, Ryan met Brad, who had been missing from school for two months.

Brad was later found in juvenile court. Patton joked to Brad’s caseworker he wished he had his foster parent license so he could take him in.

“I had just gotten my license for foster parenting and his current placement was not working out,” Ryan said. “It’s kind of a funny story because I only had a first name and didn’t know if I wanted to take on a stranger. I asked Brad, who said, ‘yeah, let’s give it a try.’ Then, it turned out I knew I knew him.”

Turns out that not so long after that, Ryan did get his license and child protective services worked out an arrangement so he could take Brad in.

He went from bachelor to father

Brad was adopted by Ryan in February. A few months later, in August, Ryan would welcome a second child in his home, another student from the same school. It turns out Ryan had met Nick when he went with probation officers to pick him up for not attending school.

And so, Ryan went from living alone to welcoming two teenagers in his home. Ryan had been living as a bachelor prior to adopting his sons. Evidently, the change took some getting used to.

I’m 37 or 38 and taking on a teenager. I had lived alone, and was a creature of habit. The first day, I almost burned the house down while making hamburgers and fries.

“I work with kids all day, but working with kids and raising
two kids are two different things,” he said. And teens from the Children’s
Protective system bring issues, such as abandonment, which can complicate the
process.

“I have nothing but good things to say about Children’s Protective Services,” Patton says. “They’re very personable and professional. They do a great job. If they’re not able to answer a question, they’ll do a phone conference with someone who can help with the issue.”

He loves his new family

Even though there have been difficulties, the end result is worth it. Brad and Nick are now more than friends, they are brothers in every sense of the word.

While Ryan admits some of his parenting journey has been a roller coaster ride, it’s been super enjoyable.

“We call ourselves a herd,” Ryan said.

Since he was adopted, Brad graduated from West Clermont High School this spring.

His graduation was a big thing, considering that he never used to be in school.

Nick, in his sophomore year at Clermont Northeastern. He just got his temporary driving permit and loves wrestling.

“Again, he was one who never went to school,” Patton said.
“We go to school in my house. He understands that.”

Ryan’s journey from bachelor to father changed the lives of Brad and Nick. But also, it changed his forever. And now, for this new family, the possibilities are truly endless.