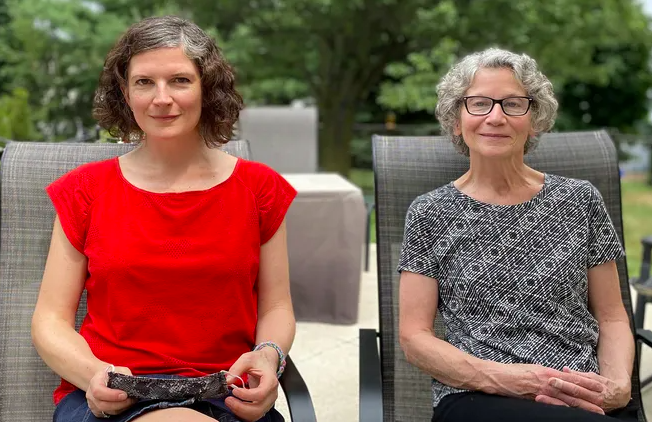 It was around Thanksgiving in 1969 when 17-year-old Mary Beth DeSanto got pregnant and made the gut-wrenching decision to give up her baby for adoption.

It was an extremely difficult choice, one she made to be able to give the baby a better life, and she thought about her daughter all the time.

The toughest decision of her life

When DeSanto got pregnant as a teenager, she felt her baby would have a better life with someone more mature. So she planned to give her up for adoption.

But when the baby was born, DeSanto changed her mind.

“I called my parents and told them I would be bringing her home,” DeSanto said in the online PBS series “American Portrait,” according to USA Today.

“My poor parents. They were wonderful through the whole thing. Whatever I decided would be OK with them. They never pressured me one way or the other,” she said.

But DeSanto changed her mind again.

“Then I pictured what it would look like if I took her home, and me sitting in the dark rocking her and crying because I didn’t know how to raise her. I was just a kid. I felt so overwhelmed. It was a chance I couldn’t take.”

“I didn’t want to ruin her life as I had ruined mine,” she added.

So, DeSanto gave her baby up for adoption.

Two years later, DeSanto got married and had two sons, but she didn’t know what happened to her first-born daughter until a letter arrived in the mail in March 2020.

One day, DeSanto, now 68, was watching an episode of TLC’s “Long Lost Family,” a show about people reuniting with their biological families, when she decided to turn it off before it finished.

“I loved watching ‘Long Lost Family’ because I knew at the end there would be a happy ending. But I knew it was something I never was going to have,” DeSanto said.

Within half an hour, the doorbell rang and her husband brought in a letter. It was from New York.

‘My name is Victoria Rich. This may not be the letter you’d expect to receive every day. I was born at the Our Lady of Victory Infant Home in Lackawanna, NY on August 20, 1970.”

DeSanto’s daughter, now 50, had found her.

“I’ve often thought that I didn’t see the happy ending on the show that day, but the letter was my happy ending,” she said.

Rich, who is a photo editor and video producer with a master’s degree in fine arts, hadn’t thought too much about finding her birth mother. But when the state of New York decided to allow adopted children to see their birth certificates in January 2019, she signed up to get more information.

After seeing DeSanto’s name on her birth certificate, Rich sent her a letter. She expected the worst when she received a phone call at work one day.

“The caller ID said Erie, PA,” she said. “I was trying to be cool, and she’s like, ‘Is this Victoria? It’s Mary Beth. I received your letter.’ Then she paused and I expected her to say, ‘Please don’t contact me ever again.’ But she said a positive thing and I immediately knew that she wanted this, and that made it OK.”

The long-awaited reunion was put on hold due to coronavirus, but eventually Rich drove to meet DeSanto.

“Mary Beth already felt familiar. But I still had this fear,” she said. “What if it didn’t work out? What if the rest of the family didn’t like me?

“I’d had an idea of an ideal situation with my mother, and thought, oh, that’s not going to happen. But it did,” Rich added. “It was kind of ridiculous how positive and welcoming she was.”

DeSanto said she was relieved to meet her daughter and was thrilled she ended up having a great life.

“I couldn’t ask for a better daughter. She grew up to be a remarkable woman. She’s who I wish I would have been. She’s intelligent, independent, persistent. She’s not just a daughter but super-daughter. She’s not only OK, she thrived.”

Some decisions do end up working out for the best

DeSanto was forced to make a life-altering decision as a teenager. Did she make the right choice? She spent her life asking herself that very question. But in the end, she got to meet her daughter who, as luck would have it, ended up having a great life.

Beyond being a heartwarming story, this reunion proves that some very difficult choices do end up working out for the best — even when the unfolding of the journey is not the most traditional or expected.

How to Un-Stub Your Toe on the Nail of Life | Eric Bailey Motivational Speech | Goalcast
Quordle: Hit Wordle-style game finds B-U-Y-E-R in Merriam-Webster
The Single Greatest Mistake A Man Can Make | Jordan Peterson
How to be the Smartest in the Room | Ibram Kendi | Goalcast
Uber Driver Donates a Kidney to His Passenger – Here’s Why He Insists It’s Not a Coincidence