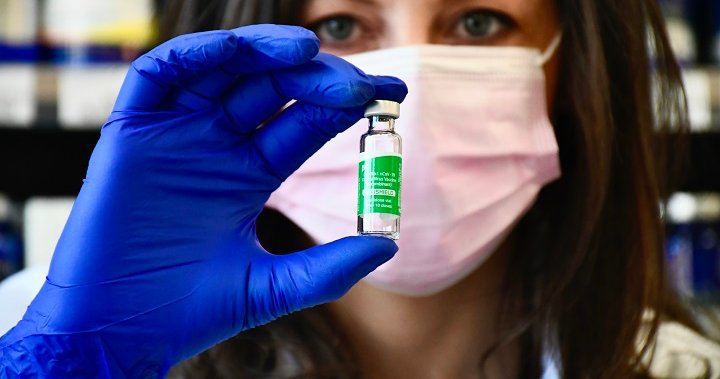 On Monday, Canada’s National Advisory Committee on Immunization (NACI) announced it is now recommending AstraZeneca’s COVID-19 vaccine not be administered to people under the age of 55.

According to infectious diseases specialist Dr. Isaac Bogoch, over the last few weeks, there have been rare reports of blood clotting in Europe associated with AstraZeneca.

“They basically drew a line and said… if you’re over 55, this is reasonable, you should be taking this. If you’re under 55, let’s push pause because of these very rare events.”

Read more:
AstraZeneca COVID-19 vaccine not recommended for those under 55, NACI says

For Canadians who have already taken the AstraZeneca vaccine, Bogoch says while it’s important for people to be aware, they shouldn’t be concerned as these were very rare reports.

“We still have to have a much better understanding over what this is… what the risk factors are, why some people get it, why some people don’t, but also put it in the appropriate context because this is a very infrequent occurrence, but it’s still something that we should be aware of.”

The federal government has announced that Canada is expecting around 1.5 million doses of the AstraZeneca vaccine from the United States. According to Bogoch, these doses will be allocated to provinces, which will administer them as per their vaccine distribution plan.

On the rise of COVID-19 cases in Ontario, Bogoch says cases are certainly climbing, whereas eastern provinces and the northern territories are doing better.

“I think it’s fair to say that (Ontario’s) headed in the wrong direction during this third wave. We know how to stop this. We’ve done this, unfortunately, twice before,” he says.

“Vaccines are rolling out but they’re not rolling out fast enough to stop a third wave… We really have to take steps to really curb this rise in cases.”

In British Columbia, the province has implemented ‘circuit breaker’ restrictions for the next three weeks after seeing a surge of cases.

On whether other provinces may follow suit, Bogoch says looking at other areas that are seeing an ongoing increase in COVID-19 cases, it is probably “inevitable” that a similar plan is in the works.

“Once your health-care system is really being threatened of being stretched beyond capacity, you’re not left with many other options that can really dictate that down in a short period of time,” he says.

Bogoch adds there may be other plans implemented in other provinces in the upcoming days or weeks but it is up to the senior political and senior public health leadership within those provinces.

While Canada will be able to vaccinate numerous residents, Bogoch says April and May might be “turbulent.”

But as more Canadians continue to get vaccinated and outdoor activities can resume, there will be more drivers to reduce cases, he says.

“I think April is going to be a bit of a challenge, but moving forward we should be OK.”

Beyond Dry January: 5 Benefits of Extending Your Break from Alcohol
How to Un-Stub Your Toe on the Nail of Life | Eric Bailey Motivational Speech | Goalcast
Detroit Couple Turn Vacant Lots to Bee Farms – Including the Childhood Home of One Legendary Rap Superstar
Domino’s Employee Delivers a $12 Order – But the Unusual Tip He Received in Return Takes Him by Surprise
This Year, Let Go Of The People Who Aren’t Ready To Love You