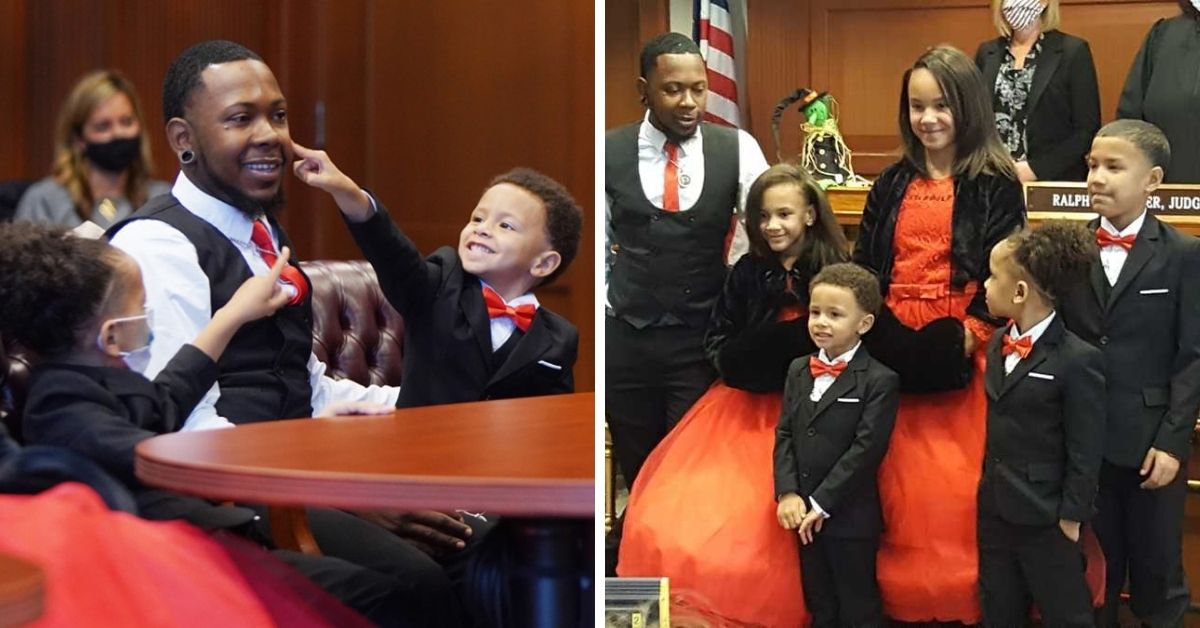 Being a parent can sometimes be the hardest job in the world, and it’s even harder if you are trying to do it on your own. But that didn’t stop this single Florida man from instantly turning his whole life upside down by adopting 5 siblings.

He did this because he wanted to make sure the siblings stayed together and weren’t separated by the foster care system.

Robert knew what it was like to feel unloved

Robert Carter adopted siblings Marionna, Makayla, Robert, Giovanni, and Kiontae. When asked why he made this major decision that changed all their lives forever, he shared that he too knew how it felt to be taken away from loved ones.

“I didn’t eat for a week,” Carter told TODAY Parents. “I didn’t know where my family was. I didn’t know if I would ever see them again. It was traumatizing.”

Taking care of his own siblings and his volunteering experience at South Avondale Elementary both pushed him to become an adoptive father.

I understand how they feel. I understand what they went through, so it really touched me. I was already thinking about adopting all of the kids but when I saw them crying, I was like, ‘Ok, I’m going to take all five to keep them together.’

Robert first became a foster parent to three of the siblings, Robert, 9, Giovanni, 5, and Kiontae, 4, back in December 2019. After 6 months apart from their sisters Marionna, 10, and Makayla, 7, they were able to reunite after a visit from the foster parent who had adopted them. When the siblings got together, Robert was simply touched by the scene.

Everybody was just crying and hugging and not wanting to let go. In that moment, I knew I had to adopt all five.

Mr. Carter was the only foster parent willing and able to adopt all of the children. His childhood background has made him aware of the importance of keeping siblings together.

“He says that he enjoys being their father and that parenting them is easier than he could have ever imagined! His life is busy, with a lot of love, laughter and loudness! I have enjoyed working with him and witnessing the children bond as siblings,” Stacey continued.

Robert is focused on “making memories to replace a lot of the bad ones,” with his children

Knowing how difficult the kids have had it, drawing from his own experiences in foster care, Robert is trying his best to turn their lives around.

Every night I talk to them and let them know, ‘I’m your dad forever. I know what it’s like and I’m always here for you.’

And his kids are warming up to their new parent. “Like Marionna. She’s warmed up so much since the beginning. At first, she didn’t like me,” Robert shares.

As the eldest, “Marionna, she was the mother figure. She was responsible for everything. I understand what that’s like.”

Robert understood, as he too had been in the same position when he took care of his own siblings. After a while, Marionna ended up warming up to him, which meant the world to their new father.

She walked in my room last night and said, ‘I just want to say thanks for taking us in and taking care of us when our real mom couldn’t.’ It just really touched me.

“I want her to have a childhood. I didn’t have one,” Carter explained. “I won’t even let her make her brothers and sister a bowl of cereal. That’s not her job. Her job is to play.”

Similarly, the other siblings also became used to their new life. “I used to get up and find them all together,” Carter said. “But they’re no longer afraid of being ripped apart.”

As a new parent, Robert has one priority:

So just making memories, letting them know I’m here and they never have to go. I’m here for them no matter what.

Everyone goes through hardship in life. What you decide to do with that experience is up to you. Robert knew what it was like to live without one’s siblings, and wanted to make sure these five kids wouldn’t go through the same trials.

He Was Fatally Beaten by Memphis Police — Now People Around the World Are Sharing #SunsetsForTyre in His Honor
Podcast: What to know about “novelty hunting.”
How I Stopped Feeling Embarrassed and Ashamed of Being Single
Femcels: Inside the enigmatic subculture of involuntary celibate women
All the Things I Didn’t Tell the Men I Dated Because I Was Afraid