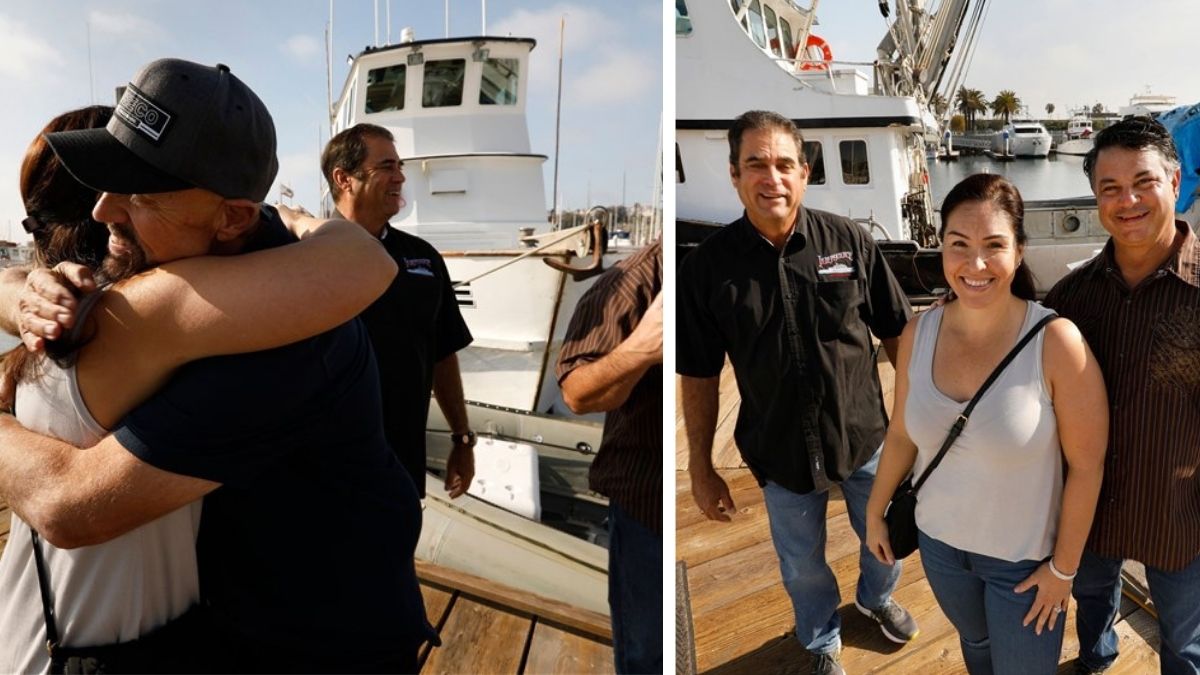 A woman has reunited with her guardian angels almost four decades after their first meeting in a story guaranteed to get you in your feels.

Nine-year-old Desireé Rodriguez was on her dad’s boat with her parents, aunt, uncle and sister in Catalina Island, Southern California.

That afternoon, the weather started to change as fog rolled in. Rodriguez went to sleep in the lower cabin and awoke to her father screaming that their boat was sinking.

She and her sister managed to escape through a window and into the ice-cold Pacific Ocean water.

In the hours that followed, the young girl watched as her family members disappeared into the ocean one by one.

Nearby, best buds Captain Mark Pisano and Captain Paul Strasser were with their friends fishing for yellowtail. Strasser noticed something in the water and realized it was the bow of a boat.

They approached and noticed Rodriguez floating in the water. Pisano dove into the water and brought her aboard to safety as the men radioed for the Coast Guard. Sadly she was the sole survivor.

The story of Rodriguez’s tragic accident along with the captains’ brave rescue made national headlines. However, life went on and both the girl and her rescuers sailed their separate ways.

Strasser told the Los Angeles Times that while they always thought of Rodriguez, finding her felt like mission impossible.

“Desiree was a ghost. We saved her, she’s out in the world. And that’s all we know. We had no clues on anybody that knew how to get a hold of her”

That all changed on an episode of “Friedman’s Adventures,” a podcast on fishing and the outdoors. There, host Phil Friedman had as guests none other than Strasser and Pisano.

When the two men recounted their wild aquatic rescue tale, Friedman tells People Magazine that it inspired him to action.

“My brain was like, ‘I’m going to try to locate her.’ We’ve got to finish this story!”

The fishermen’s story reminded him of a former co-worker who mentioned being the lone survivor of a boating accident.

However, when Pisano said her name, there was no doubt.

“I was like, holy moly. Wow, this is just surreal,” he told People.

To pull it off, Friedman invited Strasser and Pisano back to the show. However, this time they’d be joined by “Raquel,” who was there to translate the episode into Spanish.

She sat quietly as the men retold their story at sea. Then, in a moment 35 years in the making, Friedman revealed Raquel’s true identity (10 minutes into the episode).

“This is not a translator. I’ll let her introduce herself to you”

There wasn’t a dry eye on set as everyone shared hugs. They then exchanged memories of that tragic day along with gratitude for finding each other.

As an added surprise, Rodriguez’s husband and kids also came by the set to thank the men who saved Desirée.

“I feel like she’s sort of our daughter, in a way, because we brought her back to life, even though we never knew each other”

Whether it’s saving someone at sea or giving up your plane seat, kindness makes a lasting impact.

This Year, Let Go Of The People Who Aren’t Ready To Love You
Sweet Revenge: Woman Wins Lottery Jackpot After Husband Leaves Her for Best Friend
7 False Beliefs That Will Keep You Trapped in Your Head Forever
How to be the Smartest in the Room | Ibram Kendi | Goalcast
‘Gen Z yellow’: Next ‘it’ colour or marketing ploy?