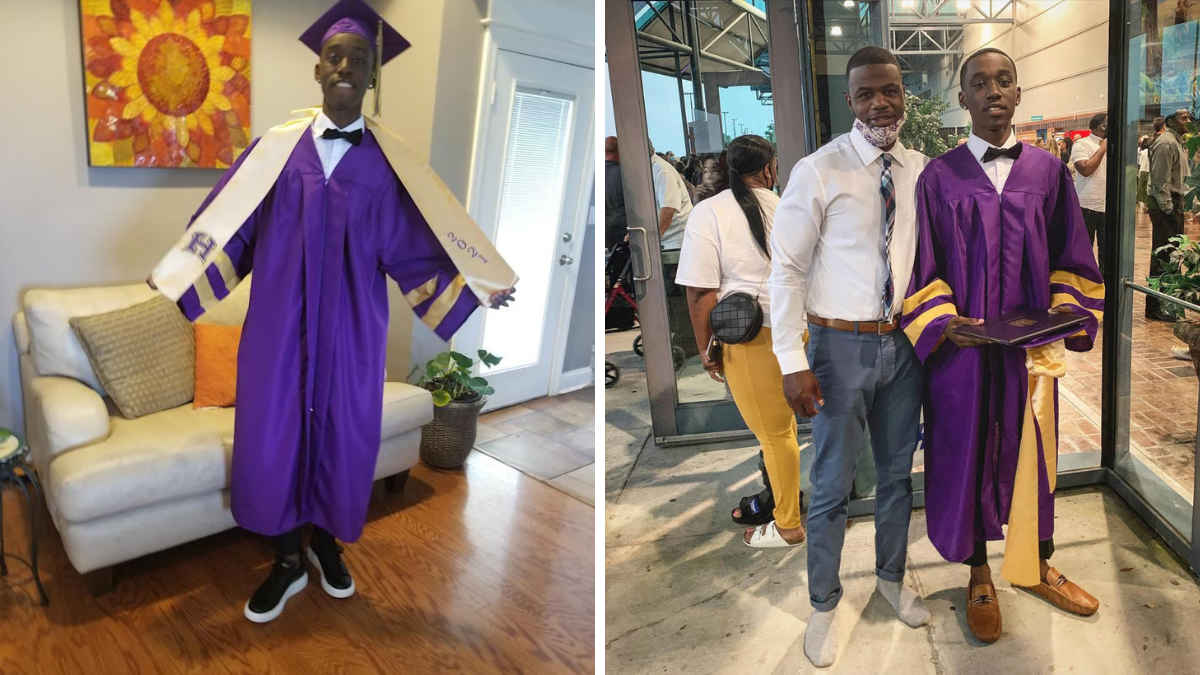 A teacher’s extraordinary act of kindness helped a student celebrate one of the proudest moments of his life — but it really makes you wonder why that dress code policy was enforced in the first place.

Prevented from attending his graduation

Daverius Peters worked extremely hard to get to his graduation day. Because of chronic asthma, the senior at Hahnville High School in Boutte, Louisiana, spent the year remote learning. But on his graduation day, he nearly wasn’t allowed to accept his diploma.

The school instituted a strict dress code of dress shoes, a white dress shirt and tie underneath a purple gown — all things that Peters wore on his graduation day. But according to the school representative standing at the door, the shoes he was wearing — black leather with a white sole — didn’t qualify because they looked like “athletic shoes.”

“She said my shoes violated the dress code and I couldn’t attend the ceremony unless I changed them,” Peters told The Washington Post.

“I was in shock,” Peters recalled. “I felt humiliated. I just wanted to walk across the stage and get my diploma.”

A teacher lent him shoes

With just minutes to spare before the ceremony was set to begin, Peters didn’t have time to go buy new shoes — so he turned to a teacher beloved on campus for helping students work through their issues, John Butler.

In a Facebook post, Butler explained how Peters ran up to him in a panic to tell him the situation.

Butler — who was attending as a member of the audience to support his own daughter’s graduation — tried to convince the woman at the door to let Peters in. So Butler didn’t hesitate to do the right thing.

“It becomes a no brainer to me, a no more questions asked scenario. I gave him the shoes on my feet,” Butler wrote.

Despite the shoes being two sizes too big, a grateful Peters slid across the stage to accept his diploma.

“I wasn’t surprised because Mr. Butler is that type of person,” he told The Post. “At school, if you’re having a bad day, he’ll be the one to take you out of class, walk around the school with you and talk to you.”

Peters’ mother Jima Smith was also thankful for Butler’s act of kindness, but she was also furious at the school policy which could have robbed her son of one of the proudest moments of his life up to this point.

“He worked so hard, and for someone to just rip that away from him, that was maddening to me,” she said. “How about if I couldn’t afford to buy him the shoes? This is not just about him; this is about the people that come after him.”

“If it wasn’t for Mr. Butler’s kind and thoughtful act, my child would have been sitting outside, and I wouldn’t have known,” Smith added. “I pray he will continue to work in the public school system because we need more teachers like him. Our young Black men need good role models and mentors like Mr. Butler.”

When asked about the dress shoe policy, the school’s director of public information, Stevie Crovetto said they will consider amending it.

“As with any policy that we have in place, any time an opportunity is presented to us to review and to make improvements, we absolutely will follow up on that,” she said. “We are not the least bit surprised that Mr. Butler did this kind gesture for this senior.”

As students are kicked out of class for wearing turtlenecks or expelled for wearing skirts and others are barred from graduation because they don’t own the precise type of shoes, we have to ask ourselves if dress code policies are doing more harm than good. What if, as Smith said, a family couldn’t afford to buy new shoes. Does that mean the student doesn’t deserve to graduate after putting in years of hard work?

Bogus dress code policies aside, it is wonderful to know that students like Peters have teachers like Butler to be on their side and lend a helping hand — or helping shoes — when they need it most.

How to Un-Stub Your Toe on the Nail of Life | Eric Bailey Motivational Speech | Goalcast
Parents issue warning after teen dies from inhaling aerosol deodorant
How to balance social expectations and your budget amid inflation: ‘It’s OK to say no’
Detroit Couple Turn Vacant Lots to Bee Farms – Including the Childhood Home of One Legendary Rap Superstar
It Takes One Person To Make You Feel Like You Matter | Kyle Scheele Inspirational Speech | Goalcast