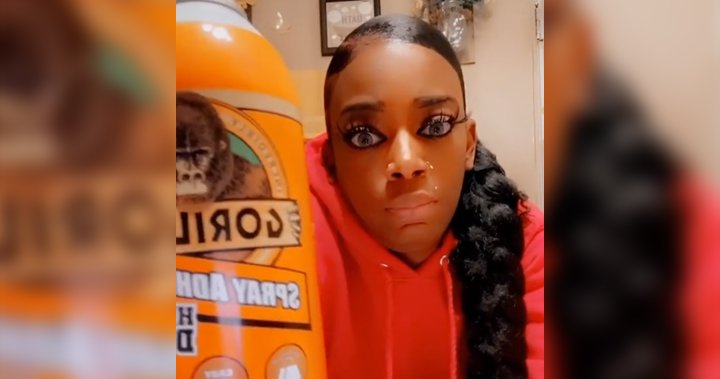 Industrial-strength adhesive is no substitute for a can of hair spray.

Tessica Brown learned that lesson the hard way this month after she used a spray can of Gorilla Glue on her hair and found herself stuck — quite literally — with a single hairstyle.

Brown described the initial superglue disaster in a super-viral TikTok video, then spent a week documenting her efforts to wash out the glue before a surgeon finally did it for her on Wednesday.

The sticky saga dates back to early February, when Brown first posted a TikTok video describing her hairy situation at length.

In the video, the 40-year-old from Louisiana explains that she ran out of Got2b Glued hair spray in the middle of doing her hair. Brown says she tried to improvise by using a can of Gorilla spray adhesive to finish the job.

“Bad, bad, bad idea,” she says in the video, while showing off the matted-down, helmet-firm hair on top of her head. The glue also hardened up her long ponytail.

Brown adds that she’s been dealing with the problem for a month.

A second video shows Brown lathering up a handful of shampoo and rubbing it on her head, then wiping it off after it has no effect on her laminated scalp.

“Nothing happens,” she says. “This is the life that I guess I’m going to have to live.”

It don’t move I hate it here

More than 28 million people watched the initial video about her blunder, and millions more have followed along to watch her updates and offer advice on removing the glue.

Some mocked her for the error, while others were sympathetic to her plight.

Among those who backed her was Chance The Rapper, who applauded others for being sympathetic on Twitter.

“When I watched the video the second time it was hard to laugh ’cause I could tell (she) genuinely didn’t know she had put one of the world’s most powerful adhesives in her (hair),” he tweeted.

Brown says she tried using coconut oil, tea tree oil and several other tactics to get rid of the glue, but none of them worked. She also got checked out by a local doctor who apparently could not help her.

Gorilla Glue called it an “unfortunate” and “unique” situation in a statement on Sunday, and wished her “the best” with her visit to the doctor.

The company also said that Brown had gone against the instructions on the label in the way she used the adhesive.

“This product is not indicated for use in or on hair as it is considered permanent,” the company said in its statement. “Our spray adhesive states in the warning label ‘Do not swallow. Do not get in eyes, on skin or on clothing …’

“It is used for craft, home, auto or office projects to mount things to surfaces such as paper, cardboard, wood, laminate and fabric.”

Brown’s trip to her local doctor appeared not to solve the glue problem. She later chopped off her ponytail and announced on Instagram that she was catching a flight to Los Angeles to get help with her scalp.

Dr. Michael Obeng removed the glue during a four-hour surgery in L.A. on Wednesday, TMZ reports. The plastic surgeon reportedly did the surgery for free, and used a combination of medical-grade adhesive remover, aloe vera, olive oil and acetone to dissolve the glue.

Video captured by the outlet shows Brown waking from her anesthesia, running a hand through her loose hair and bursting into tears.

GORILLA GLUE GIRL GOT HER HAIR BACK YASSSSS pic.twitter.com/FvS6zOmzx1

Brown will have to wait some time before putting her hair into a ponytail or using a weave, but it looks like she’ll get to keep her head of hair — and she’ll be able to style it in many different ways in the future.

8-Year-Old Boy’s Family Is Down to Their Last $12 Living in a Shed – Until His Own Business Saves Them All
How I Stopped Feeling Embarrassed and Ashamed of Being Single
The World’s Best Blind Mountain Biker | Brian Bushway | #shorts
Looking for love? 44% U.S. adults use dating apps to find long-term partners: study
Deaf Domino’s Employee Delivers Pizzas on Foot After His Car Breaks Down – In Return, He Gets a “Tip” of $12,000