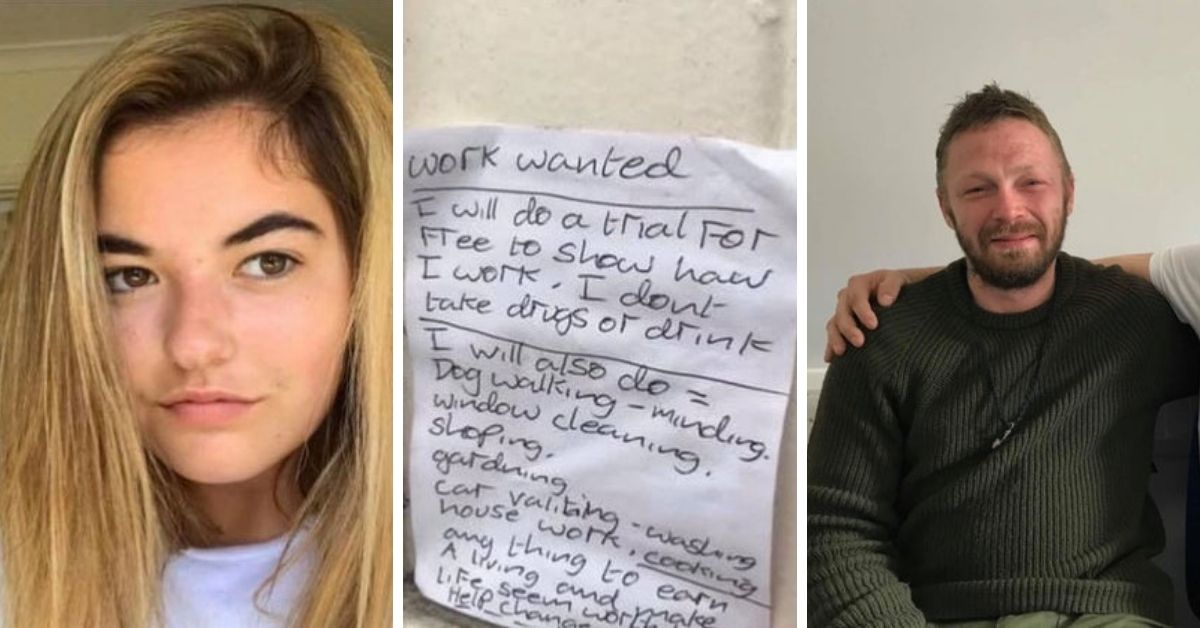 When a teenage girl named Charlotte Howard discovered a note on the streets of Hastings, East Sussex, she paid attention to its content. The note was from 37-year-old Anthony Johnson, who had been homeless for 9 years and desperate to find work.

And rather than ignoring his plea, she decided she would do something to help him.

The 16-year-old Charlotte found the note outside a bus stop and as she read it, her heart opened up for the man who had written it.

Charlotte then took a picture of it and posted it on Facebook, hoping someone may help Anthony by finding him a job.

“Work wanted I will do a trial for free to show how I work. I don’t take drugs or drink I will also do: Dog walking-minding. Window cleaning. Sloping. Gardening. Car valeting-washing, housework, cooking
Anything to earn a living and make life seem worth living. Help change a life”

One of the people who saw Charlotte’s post was  Nelson Smith – a landscape gardener –who
immediately contacted Anthony about a potential job.

Anthony, who spent nine years on the streets, said:

The reaction after Charlotte posted the note was weird. I was suddenly bombarded with certain things.

After contacting Charlotte, Nelson set up Anthony with a gardening job. This was the chance he needed to turn his whole life around.

Leaving a rough life landed him in the streets

Anthony had had it rough. “I have had problems with mental health in recent years and in this post, I saw someone trying to help themselves” Nelson explained.

He came from a difficult environment and upbringing. “I didn’t want to do the things I used to do – my social circles used to be drug takers and criminals. Now it’s pastors and people doing outreach work,” the man elaborated on his situation.

He also explained that it was his choice to leave his awful past behind that landed him in the streets. Yet, he didn’t wish to be homeless. He just wanted to make a difference in his life.

One person can make all the difference

Anthony cannot thank Charlotte enough for taking the time to read his note. He knows not everyone would have spared a few seconds to pay attention to it.

I wouldn’t have got anywhere looking for a job if it wasn’t for her – she really is incredible. It’s not like I haven’t previously been asking for help but all it takes is an open-minded person like Charlotte to come along and help.

Charlotte also revealed that it was the last sentence of Anthony’s note that truly pushed her to do something good. She also raised over £1,000 for Anthony’s cause and managed to buy him a caravan so he would have a place to live while working.

“Thank you for helping change what I have going on, thank you for understanding my situation” Anthony man addressed those who helped him. “If I could write a message to thank every single person who donated then I would,” he added.

All it takes to make a difference is to just be open to it. “She saw me and recognized my position and decided she wanted to do something to help.” That’s something we can all take example from.

Mexico’s richest man lists $80M NYC mansion and it could break records
I Have 2 Questions For You (Motivational Video) Fearless Motivation
How to Be Intolerant of Dysfunction | Josh Shipp | Goalcast
Sweet Revenge: Woman Wins Lottery Jackpot After Husband Leaves Her for Best Friend
How to Un-Stub Your Toe on the Nail of Life | Eric Bailey Motivational Speech | Goalcast