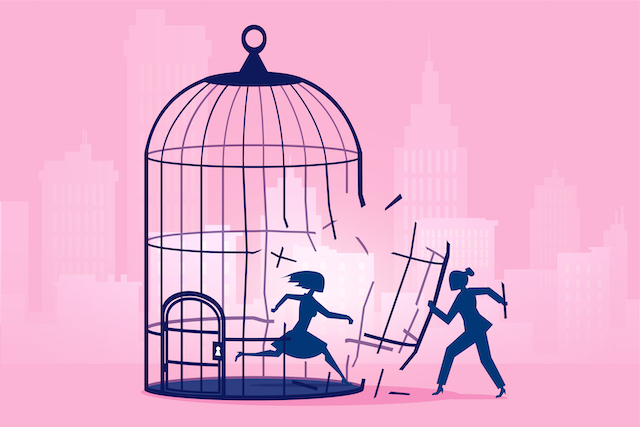 “Always concentrate on how far you’ve come, rather than how far you have left to go.” ~Unknown

I recently read Glennon Doyle’s Untamed, and like many who have read it, I felt as if it had changed my life—but not because it made me think of all the things I was capable of (as was the case with many of friends who read it), but because it made me realize how capable I had already been.

The book on the whole is beautiful and inspiring, but the part that stuck with me the most was the story about Tabitha, a beautiful cheetah that Glennon and her kids saw at a safari park and a lab named Minnie that had been raised alongside Tabitha, as her best friend, to help tame Tabitha.

Born as a magnificent, wild beast, Tabitha had lost her wild by being caged. She had forgotten her own power, her own strength, her own identity, and had become tamed by watching her best friend. But remnants of Tabitha’s inner wild came back to life when she walked away from the pink bunny toward the perimeter of the fence that was keeping her caged in. The closer she was to the perimeter, the more fierce and regal Tabitha became.

Glennon insightfully notes in the book that if a wild animal like a “cheetah can be tamed to forget her wild, certainly a woman can too.” And that’s when I wondered, had I also forgotten my own inner wild?  Was I spending my time trapped inside a cage when I could be pacing the perimeter instead?

I beat myself up over that story for days while desperately trying to think of how I could break free of my metaphorical cage so I could find my way to the seemingly elusive perimeter that others seemed to have easily found and were already pacing.

I questioned why I hadn’t worked harder, pushed further, and done more to create the life I truly wanted, especially when it became painfully clear that the one I was living didn’t fit that description.  And that’s when it suddenly hit me. Like a ton of bricks falling on me out of nowhere:

I didn’t need to make my way to the perimeter. I was already there. Truth be told, I had been there for most of my life, and it was so familiar to me that I didn’t even notice it anymore.

As I sat there in the midst of this comprehension, I looked back on my life and suddenly the steps to the perimeter all seemed to fall in place.

When I fell in a bucket of boiling water at two years old and put aside my own discomfort to comfort my mother who had broken down at the sight of my burned body, I took a step towards the perimeter.

When I moved to America at the age of seven and couldn’t understand the language and was instantly labeled as “stupid” but kept going anyway, refusing to let them define who I was, I took another step towards that perimeter.

When I watched my younger sister die of an incurable illness and kept her light alive inside of me by recognizing the beauty of her life and not just the heartache of her death, I moved closer to the perimeter.

When I said no to becoming a teacher or a doctor—an unfathomable and disgraceful choice for women of my culture during those times—I took another step toward the perimeter.

When I refused an arranged marriage, again disgracing my family in the process, the perimeter was directly in my sight.

By the time I took off for law school (much to my parents’ continuing dismay), the perimeter and I were practically face to face.

For a while I stayed at the perimeter, quietly stalking my surroundings with the same pride and inner fierceness as the cheetah who inspired these ramblings. But I now realize I was never meant to stay at the perimeter—I was always meant to go beyond it.

Until I did, I would remain trapped inside my own inner chaos. And the calm I was so desperately seeking would continue to evade me. That inner restlessness that just wouldn’t go away, that indescribable lack of fulfillment and the hollow feeling in the pit of my stomach… those were all signs that I was ready to move beyond the perimeter. I was ready to uncage more than just myself—I was ready to uncage my soul.

That’s why I was repeatedly drawn back to certain people, programs, and even books. I was ready to free myself of all restrictions and for that matter, all perimeters.

The process hasn’t been easy. And at times, it has been beyond lonely. But it has also been rewarding, deeply healing, and transformative at the same time. And perhaps most importantly of all, it has allowed me to understand that in one way or another, we are all here to break free of the cages that have encased most of us for the majority of our life.

Some cages are imposed upon us by the thoughts and ideas of those around us, and other times we put ourselves into them, willingly. So we can avoid discomfort, pain, suffering, change, growth, and our own rebirth.

Sometimes they can even be helpful, but other times they do nothing but hold us back. The steel cages often tell us who to be, where to live, what we “should” do for a living, how to behave, and even who to like or dislike.

Often, the cages come in different colors, shapes, and sizes. Some are made of gold and filled with expensive toys and bribes to keep us from going outside of them.  Their allure is simply too hard to resist for some people, even though they are often accompanied by gold shackles.

Others are sparkly and filled with all that glitters. The shine is so intense that their occupants don’t even know they’re in a cage. They’re so fixated with the glitter that they spend their entire lives confined inside and never even realize they’re no freer than the people they’ve been looking down on as being “trapped.”

And of course, there are some who live in small, dark, and dingy cages that they desperately want to escape but dare not try to because they’re so convinced that it’s safer, easier, and more comfortable to just stay.

Those are the people that are so afraid of their own power and the taste of true freedom that they probably wouldn’t leave even if the cage door was opened for them.

And then there are the brave. Those that are truly courageous and have no desire to be confined by any cage or any limits. Those are the people who will do whatever it takes to break the cage so they can set themselves and all of humanity free.

Those are the people who are roaming beyond the perimeter and have uncaged far more than their physical body—they have uncaged their very soul, and along with it, the many lifetimes of memories, wisdom, and truth it holds inside.

Afsheen Shah is a certified life coach and spiritual mentor who empowers women to recapture their dreams and achieve lasting fulfillment through a combination of mindset and lifestyle changes which are designed to realign their physical, spiritual and emotional well-being.  Her mission is to help women reconnect with their heart so they can shine their unique light into the world and truly embody their inner power.

Louisiana Woman Gives Free Wigs to Children Suffering Hair Loss — Their Reactions Will Warm Your Heart
7 Ways Childhood Trauma Shows Up in Your Romantic Relationships
This Year, Let Go Of The People Who Aren’t Ready To Love You
Year of the Rabbit: Canada’s animal shelters urge not to adopt bunnies on a whim
Parents issue warning after teen dies from inhaling aerosol deodorant