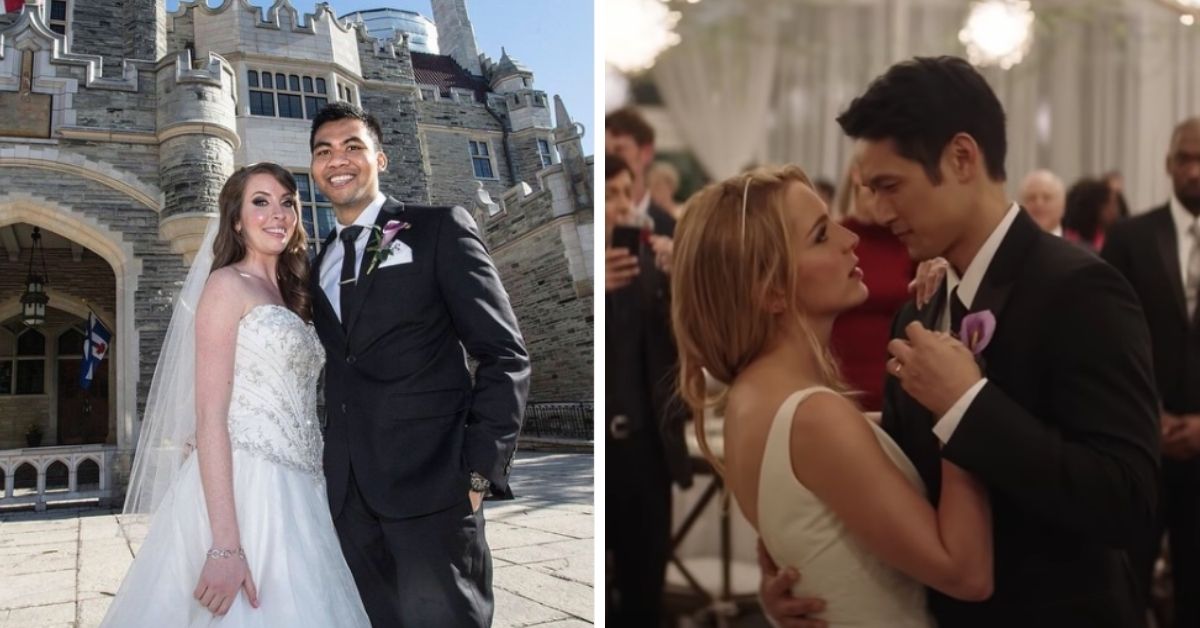 When Jenn Carter and Solomon Chau said, “I do,” they knew their time together was limited. While it’s true that none of us know exactly how much time we have, this love story didn’t have the luxury of real uncertainty. It was the stuff of heartwarming romcoms and heart wrenching dramas—all rolled into one. And to all who knew them, it was beautiful to behold.

All My Life, set to release on December 4, stars Harry Shum Jr. and Jessica Rothe and is based on Carter and Chau’s real-life story, a Toronto couple who received life -altering news while they were planning their wedding: Chau, 26, had liver cancer. As the saying goes, “the best-laid plans of mice and men often go awry.” But, as with everything life throws our way, it’s not what happens to you, but how you choose to deal with it. If anything, the global pandemic drives this lesson home daily for so many of us.

The love story began like any other: in the fall of 2007, Solomon was celebrating his 19th birthday with a house party, and Jenn happened to be in town visiting a friend who lived nearby. She snuck into Solomon’s party with her friends—even though they weren’t invited.

At first, she wasn’t sure what to make of him, as he was surrounded by other girls. But there was a definite vibe, and he knew he was interested in her. After the party, the pair courted one another over the phone for weeks, as she lived in Pickering and he in St. Catharines (a 90-minute drive). Then, that December, in the middle of a snowstorm, Solomon took a bus and sat himself down on Jenn’s doorstep. The rest, as they say, is history.

Once it was official, Solomon moved to Toronto to be closer to Jenn and studied to become a chef. They spent seven happy years together before he proposed in the summer of 2014. But he didn’t just do it any old way.

He took Jenn down to the plaza at the CN Tower, and just as he was getting down on one knee, their loved ones popped up from out of nowhere, flash mob dance style—if that’s not enough, the performance featured dolphin balloons as an added tribute to Jenn’s sister who died when she was young. Emotional yet?

And then, Solomon received a devastating diagnosis

Jenn and Solomon had been planning their wedding since August 2014 when Chau was diagnosed with liver cancer in December of the same year. Following this life-shattering news, he underwent a surgery his doctors said was successful. Relieved, they kept planning their wedding, which was scheduled for August 2015. But in March, Solomon had severe stomach pain and was rushed to the hospital. Sadly, his cancer had spread, and they were told that he wouldn’t live long enough to make their summer wedding.

Upon hearing the devastating news, Jenn and Solomon’s family and friends decided to make a GoFundMe page to raise enough money to give the couple their dream wedding as soon as humanly possible. Their campaign raised over $50,000, and the pair were married in April. The newlyweds had four months together as husband and wife (or 128 days, to be precise) before Solomon passed away 8 months after his diagnosis—on August 17—the day the couple had originally planned to get married.

Living life to the fullest

After Solomon’s diagnosis life for the young couple was full of worry and sorrow at times, but they also managed to make the most of their time together—clichés be damned. Solomon felt strong some days and weak others. They went for hospital visits, they traveled to Niagara Falls and Blue Mountain, they had parties, they bought a dog. Rather than allowing their sadness to consume them whole (which would have been very understandable), they moved forward with their life together by making as many memories as they could each day. And, after they tied the knot, they began a morning video diary: Jenn would say, “Just tell me something,” and he would. The result? A moving video tribute to their last months together.

Although his doctors said he’d die, Solomon Chau kept right on living. He’d joke around and make them laugh, prompting them to dub him ‘superhuman.’ When he felt weak and Jenn got worried, he would remind both her and himself that life is great and that tomorrow would be better. What better reminder to take the time to appreciate the people we love? What better reminder to live each day like it could be the last?

Jenn’s brother Mike had the chance to speak to Solomon about death, and about what happens afterwards.

We came up with this thing, that maybe it’s a vacation… He said, ‘yeah, I’ll be there. I’ll wait for you guys.’

Three days before he made his trip to the other side, Solomon reminded Jenn to cherish her life without him. He didn’t want her to be bogged down after he was gone.

Life after losing the love of her life

Jenn has commented on the love she shared with Solomon and the soon-to-be-released movie in a press release. “Every love story has its highs and lows, and mine and Sol’s was no different,” she said.

“We were two very ordinary individuals who found ourselves in a very extraordinary situation. We had the choice to either give in to the fear that Sol’s cancer prognosis had laid upon us, or, to move forward with every ounce of love and support we’d be given, making the most of our time we had left together. Our family and friends, our community, and even complete strangers stepped in to help make the last few months of Sol’s life memorable. Everyone who had the privilege to witness Sol during his darkest hours will remember him as the one in the room with the biggest smile; the one who wanted to make sure that everyone around him was okay; and the one who took the challenges that life had given him and found a way to make the most of it. He will always be someone who gave the world his all, and in his time of need, the world gave it right back. It is an honour to be sharing our story with the world through this film.”

Rothe has described what an emotional experience making the film was for her. “I was an emotional wreck from the moment I first read the script,” she said. “I was incredibly lucky that I got to talk to the real Jenn a couple of times on the phone. One time we talked for more than three hours. She very generously shared some very intimate stories about their lives to help Harry and I create a structure for this film…”

She also said she wanted me to have complete freedom in how I portrayed her. She just wanted the film to be a celebration of her and Sol’s love.

Ultimately, Rothe was pleased to discover that Carter was indeed happy with the end result.

Time is a gift we should all cherish

The chemistry between Rothe and Shum was key to the success All My Life. The pair would meet up off set to forge an emotional bond that helped them get through it. Of Shum, Rothe has said, “I’m a big crier so after some really emotional scenes he would make insane faces and dance around. We definitely had a very juvenile relationship to get through those sadder moments.”

For Shum, All My Life was a poignant reminder to enjoy the little things.

My biggest takeaway from this movie was not the cliched ‘make the most out of your life’ and all that, but it was to find those small moments. There’s always something beautiful and positive in just the smallest things and Sol did that.

Solomon’s life right up to the end is a reminder to people that even with limited time, you can still share moments that will last a lifetime, and Shum hopes to share this message with the film’s release.

Rothe has also shared how making the film affected her personally. “I was engaged when I filmed the movie and I am now married to my wonderful husband,” she said.

Working on something like this…really made me promise to never take him for granted…We all have those moments where we feel frustrated and we rush through the days. I’ve now had the opportunity to experience that kind of grief [of loss] through the film, so now I try to let him know that I love him, every day.

Jenn and Solomon’s story is just a tale of loss. It’s also a story of love, of living every moment and creating the space for joy even in the midst of tragedy.

Struggling Single Mom Is Summoned to Courtroom – Judge Issues Her a $350 Fine but Then Changes His Mind
How to Un-Stub Your Toe on the Nail of Life | Eric Bailey Motivational Speech | Goalcast
Slow mornings lead to deliberate days
How to balance social expectations and your budget amid inflation: ‘It’s OK to say no’
Gary Vaynerchuk’s Life Advice Will Change Your Future | Gary Vaynerchuk Motivation (Gary Vee)