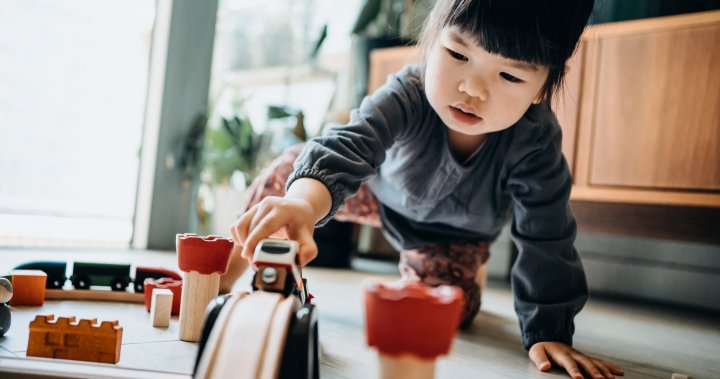 With the COVID-19 restrictions and the closures of schools in some provinces, keeping kids entertained while they’re stuck at home has been difficult for parents.

From moulding your own ice cream scoops to engaging in indoor laser tag, Schacht listed the top toys for children as we enter spring.

(Watch Schacht’s full interview with ‘The Morning Show’ in the video above and check out Global News Lifestyle’s list below.)

Read more:
The most-wanted toys and gifts for kids in 2020

Glove-A-Bubbles comes with a resealable packet of bubbles and glove that kids can use to dip their hand in and wave to create bubbles.

“You are never ever too old for bubbles. Kids love this, grown-ups love this,” says Schacht, adding the product goes for about $4.99.

When unboxing Disney Doorables, there are doors to open that reveal teeny collectible characters like Cinderella, Daisy Duck and other famous Disney characters.

“They still love to collect, they love little things. And who doesn’t love Disney?” Schacht observes.

Additionally, Schacht says there are regular, rare, super-rare and ultra-rare characters that kids will be incentivized to collect.

Read more:
Where to take your kids’ old toys to make sure they avoid the dump

Using Kinetic Sand, kids can serve up their own ice cream using the six different tools and toppings included, as well as with three colours of sand to represent chocolate, vanilla and strawberry.

While the sand is mouldable to create an ice cream scoop, it can also flow right through kids’ fingers, says Schacht, adding that the product is budget-friendly and is currently under $20.

This 3D puzzle is made up of flexible plastic tiles to assemble creatures like unicorns or elephants. The toy also comes with a set of LED lights to hide under the animal that kids create.

“When you light it up, kids are going to love the finished product, it’s going to sit right in their room,” she says.

“There’s no glue, there’s no cutting, It’s just a matter of using these plastic shapes.”

FOAMO allows children and families to create an at-home foam party within minutes.

“This is a home kit for the backyard. … It comes with the bucket, the hose, everything you need, all you need to do is add water, for the most epic foam party ever,” says Schacht.

“You’re going to turn your backyard into a party. It’s two hours of continuous foam fun.”

According to Schacht, this Birthday Cake Batter Bucket compound makes it feel like you’re playing with cake batter.

“It’s got the sprinkles stuffed inside just like you’d find on a birthday cake. It’s got this great strawberry smell, and the kids play with this stuff over and over and for hours,” she says.

“They’re going to add their own elements of fun into it. Kids love adding to the compound.”

Cutetitos have been known for their surprise stuffed animals that are wrapped and hidden in burrito blankets. Now, with the introduction of Unicornitos, Schacht says it is even more “magical” for kids.

“You are going to find one of eight different little unicorns. Each one of these has a little spot on the side so you’re going to know if your unicorn is mild, medium hot or super spicy,” she adds.

Laser X can be played one-on-one or in a team.

“The kids are home in the backyard. We don’t have to go to a laser place anymore because we have our Laser X,” Schacht says.

“It’s also about keeping those kids active. … Indoors or out, it blasts to 100 feet.”