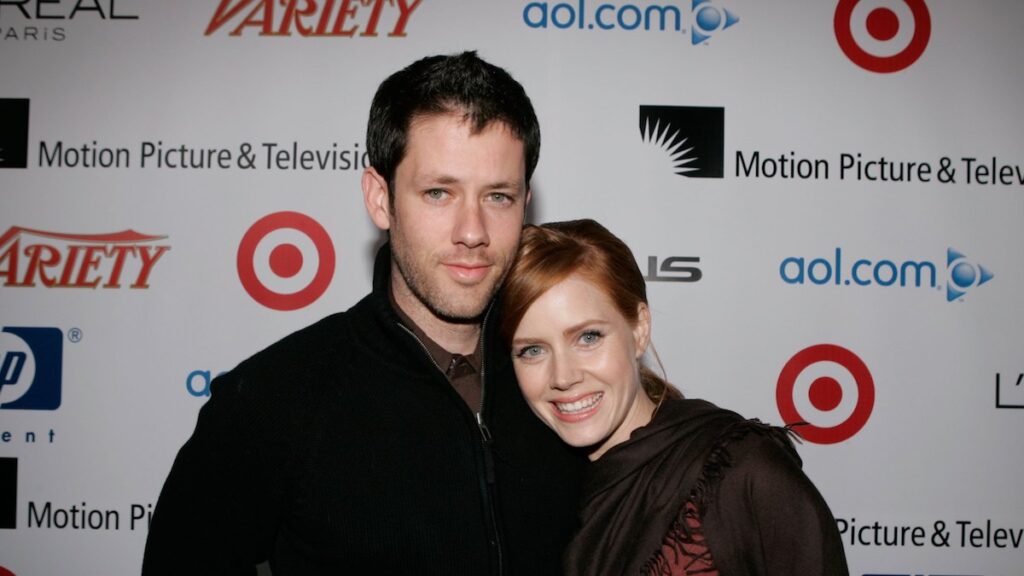 Amy Adams is a true Hollywood success story. After initially struggling to make a name for herself, the aspiring actress landed her big break in 2005’s Junebug, which got her an Oscar nomination (her first of six so far). Soon after that, she became a household name thanks to the massive success of 2007’s Enchanted, which earned a whopping $340 million at the worldwide box office.

To date, Amy Adams has appeared in over 60 films, many of them blockbusters, like Doubt, American Hustle, and Vice, and her star continues to rise. She’s earned endless praise (Adams is a nine-time Golden Globe nominee and two-time winner) and amassed an impressive net worth of $60 million, but there has been one major constant throughout it all: her husband, Darren Le Gallo.

The pair met back in 2001 when they both enrolled in the same acting class and, 20 years later, they’re still together. As Adams herself has admitted, it hasn’t always been easy, but they’ve made it work through love, support, and sacrifice.

Here’s what we can learn from Amy Adams and Darren Le Gallo’s long-lasting romance:

When Amy Adams landed a role in 2002’s Catch Me If You Can, she was sure it would be her big break. She was wrong. Even the film’s legendary director, Steven Spielberg, was convinced the part would lead to bigger things for the young actress. “What surprised me was how little she worked after our film came out, which, by the way, was a big hit,” he told Elle in 2008, recalling, “The offers were not pouring in for Amy. That was the part that should have launched her career,” he proclaimed. “But after the movie was released, she was no better off than she was before.”

In fact, she didn’t land a single job for a year and that’s when Adams learned an important lesson: Timing is everything. “Ultimately, it just wasn’t my time,” she told Elle, admitting, “I wasn’t ready. I still had a lot to learn and a lot of self-growth to work through.” Some of that learning came from an acting class she enrolled in in 2001 and, eventually, her perseverance was rewarded with a role in 2005’s Junebug, which got her a Best Supporting Actress nomination at the 2006 Academy Awards.

But the class didn’t just help her career, it also introduced her to her future husband, fellow actor Darren Le Gallo. Once again, Adams learned the importance of timing as she and Le Gallo attended class together for a year and were nothing more than platonic friends. “I did scenes with him, and I liked him and thought he was really sweet,” she told Vanity Fair, but there were a number of obstacles in their way. For one, “I had another boyfriend, and Darren was dating some girl.” For another, she “was really focused on the classes” and, what’s more, she was (wrongly) convinced that his sweetness meant “he wouldn’t be assertive enough.”

All of that changed when Adams and Le Gallo were both cast in a short film called Pennies. “I got to know him outside of class and I just found him to be such a genuine, caring person. And assertive!” she told the mag, recalling:

He demanded that we go out on a date. He said, ‘I know you’re getting over this [other] guy, but I’m taking you out on Wednesday.’ I think that was it exactly. And I was like, ‘And so you are!’

A good relationship shouldn’t be a competition

Amy Adams and Darren Le Gallo’s relationship was put to the test when Adams’ acting career took off — and Le Gallo’s didn’t. His IMDb lists 15 acting credits between 2001 and 2015 and while he’s appeared in impressive shows and films like Six Feet Under, The Big Bang Theory, and Date Night, he’s only ever landed small roles. Luckily, as Adams told People in 2007, she got “really lucky because he’s not competitive with me. He supports and embraces my success as mine. And he has his own goals for himself, but he never makes my success his failure,” she added, calling Le Gallo “really special.”

She shared the same sentiment with Vanity Fair the following year, admitting that a big part of their relationship’s success comes down to the fact that Le Gallo “is not competitive with me.”

He has a wonderful talent, and there aren’t many people in the world who are like that, where he does not think that my success is his failure. He just doesn’t see it like that, and I don’t either.

Rather than trying to compete with his partner, Le Gallo chose to fully support Adams while pursuing his own artistic interests and finding his own career validation. According to Incollect, he graduated with a B.A. in painting from Texas’ Abilene Christian University in 1996 (long before he decided to try acting) and has since returned to his first love. He now works out of the studio he’s built in their home and is a contemporary artist who’s “well known for his dream-like paintings which delve into emotional states and the subconscious mind.” Le Gallo’s Instagram features plenty of images of his art, which was recently exhibited at Trigg Ison Fine Art in L.A. in 2020, as well as a link to his other passion, electronic music.

In addition to never turning their careers into a competition, Darren Le Gallo has allowed Amy Adams to pursue hers unapologetically. The couple got engaged in 2008 and Adams told Vanity Fair that hitting that milestone required some adjustment because “for so long I was just so focused on either auditioning or working.” She confessed to having a hard time turning down roles because “the problem is I find characters I love and I have to go with them!”

Once again, she sang Le Gallo’s praises, telling the mag that her fiancé has never pushed her to choose between her personal life and her career because he “understands that it’s important to take advantage of those, and he really supports me.” As Adams’ Junebug co-star, Embeth Davidtz, told the outlet, Le Gallo has a “deep knowledge of who she is and acceptance of that.”

Le Gallo’s support didn’t even waver when, after a year of being engaged, the couple had failed to set a wedding date due to Adams’ career taking center stage. “I’ve been really busy, and I feel like a horrible fiancée that I haven’t gotten swept up in the whole idea of a wedding, but I just haven’t,” she confessed to Allure in 2009.

What Adams didn’t do was allow her career to impact their relationship’s growth and, in May 2010, they hit another major milestone with the birth of their daughter, Aviana Olea. Then, in 2015, Amy Adams and Darren Le Gallo finally tied the knot because the timing was right. Adams jokingly told The Times afterwards, “We always had the commitment, but now he’s stuck with me and I can really act out. I’m kidding! The truth is, I feel a stronger sense of family, a bigger sense of permanence, which is a nice thing for me,” she gushed.

Sometimes, you need to make sacrifices and concessions

Darren Le Gallo has never had any qualms about making sacrifices for the sake of his relationship, allowing Amy Adams to have it all: love, family, and career. It’s something the actress is incredibly thankful for and never takes for granted.

As she told The Guardian, she knows that her husband “has sacrificed a lot. He travels with me and helps to keep the family together, and I really do appreciate that,” she said, but underscored the fact that “I don’t value it because he’s a man doing it, I value it because he’s my partner.” And she knows first-hand that not everyone is blessed with a partner as supportive and giving as hers.

We have a friend who said to him, ‘I couldn’t do what you do, I really couldn’t.’ What, show up for your wife? That’s really sad.

Calling Le Gallo “an extremely competent caregiver,” the American Hustle star also noted that she finds the idea of criticizing a man for taking on the role of caregiver “funny because I never feel like my femininity is threatened by being powerful, or anything someone might say is a male attribute. So I find it so odd when men feel their masculinity is being threatened, I’m like, ‘Really? It shouldn’t be that delicate,” she proclaimed.

So when a woman once expressed shock over Adams leaving her daughter, Aviana Olea, with Le Gallo so she could go on a work trip, she had the perfect response. Speaking with Vanity Fair in 2013, the actress recalled being asked “You left your husband alone with a child?” and firing back, “Well, yeah. I know he’s completely capable and lovely, and beautiful, and offers something I could never hope to offer just in the nature of his being.”

Amy Adams and Darren Le Gallo have been together for two decades and they’re loving, supportive relationship appears to be perfect, but it isn’t — and that’s OK. The couple’s long-term union is made all the more impressive by the fact that it’s real and that Adams and Le Gallo have been faced with challenges, and overcome them.

Speaking candidly about the realities of dating and marriage with The Guardian in 2016, Adams admitted that “there have definitely been times over the course of a 15-year relationship where you’re just like, ‘I can’t.’ But then I’m like, ‘It’s OK, we’ll figure it out.’” She continued, “Relationships, especially, are not happily ever after. But I think, you know, staying the course has been so rewarding,” she said.

We’re in a relationship in Hollywood, and I think people have a perception of what the pitfalls of that can be. We’re not naive to that.

That being said, their union has always been worth the work. As Adams told USA Today, Le Gallo is her perfect match. “It’s really important to have someone to remind you who you are. I’ll run all over but come back to him, and I know who I am,” she said. Speaking with Allure, she added, “Once you have a great man in your life, it allows you — at least for me — to look at yourself and grow as an individual. If I had known I was going to find this, my early 20s would have been completely different.” Le Gallo agrees. Take one look at his Instagram and you’ll find him constantly posting about Adams with the hashtag #mybetterhalf.

Even a seemingly perfect relationship that has lasted years (or decades, in this case) requires work and it’s how you maneuver the challenges and adapt to the natural growth and evolution of your union that dictates its success. In the case of Amy Adams and Darren Le Gallo, they were forced to reconcile Adams’ exploding Hollywood career with a desire for marriage and family. They were able to do just that by being dedicated to their relationship and through Le Gallo’s willingness to adapt his lifestyle to allow Adams to pursue her dreams. All while pursuing his own and never once growing resentful of his partner or his sacrifice.

All the Things I Didn’t Tell the Men I Dated Because I Was Afraid
‘It was my heart’: Women with heart disease face barriers to care in Canada, report says
Looking for love? 44% U.S. adults use dating apps to find long-term partners: study
Service Dog Stays at Hospital With His Owner 24/7 — While Nobody Else Was Allowed to Stay
The two kinds of productivity advice