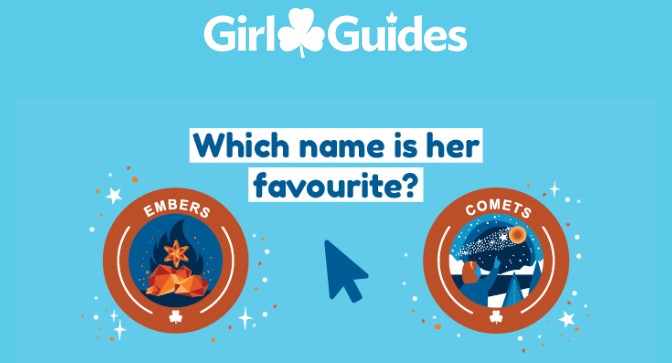 The votes are in and the Brownies will now officially be known as “Embers.”

Girl Guides of Canada (GGC) announced the name change Wednesday after inviting members of the Canadian Guiding community to cast their votes on two potential new names — Comets and Embers — for the unit that welcomes seven- and eight-year-old girls.

Gwen Stefani accused of cultural appropriation: ‘I’m Japanese and I didn’t know it’

“There was a clear preference as to which name was the favourite,” she said, adding that “a lot of people should be happy to hear the winning name.”

In mid-November, GGC informed Guiding members that they would be changing the name of the Brownies unit in a bid to be more inclusive.

“We have heard from racialized girls and former members that the name Brownies has caused them harm. Some do not want to be part of this branch because of the name,” read an email sent out to members at the time. “Some skip this branch or delay joining Girl Guides until after this branch.

“We cannot continue to use a name that causes harm to any girls.”

Despite the response to a potential name change being “overwhelmingly positive” among current Girl Guides and the organization, said Zelmanovits, there was pushback among former members of the Guiding community and the public.

Zelmanovits doesn’t criticize the public’s reaction to the initial announcement, however.

“I think the news came as a surprise to a lot of people and we have to acknowledge that a lot of time people might feel a loss of tradition, even when it’s not their own tradition,” she said, adding that seven million women in Canada have ties to Guiding and hold a lot of memory and feelings associated with the brand.

Gwen Stefani accused of cultural appropriation: ‘I’m Japanese and I didn’t know it’

However, she says, the name change is a small piece of the overall picture.

“It’s not as big a change when you think … girls’ experience is not changing. What Guiding stands for will always be the same: adult mentors working with girls and young women, friendship, fun and belonging will always be at the core of the Guides’ experience.”

The name change was an easy sell with the Guiding organization and young members.

0:32
Girl Guides of Canada changes name of ‘Brownies’ to be more inclusive


“When the girls learned that the Brownies name was one that made some girls feel like they don’t belong or was excluding them from participating, their reaction was so obvious — of course the name should be changed,” said Zelmanovits.

“When we hear about harm and we hear about feelings, once you know that harm is there you have a choice. In this case, walking the walk, listening to girls, it would be very hard to ignore those voices. Girl Guides has always made it a point to be girl-driven, so the decision to change the name reflects listening to girls and allowing them to lead the way.”

Additionally, she said, the Embers name feels like a natural fit, given the symbolism of the campfire in all areas of Guiding.

Easing into the Embers name will take some time. Guides and their units are encouraged to begin adopting the new name right away, and the organization will begin updating websites, marketing materials and other resources before the name is fully integrated by Sept. 1. Parent resources for helping adopt the new name can be found on Girlguides.ca.

Additionally, Embers will be invited to begin writing an origin story for the unit. There will be activities focusing on story development, construction and character building within their local Guiding units as they work to develop the story of the Embers. Later in the process, older Guiding members will combine various story elements and ideas and, eventually, Canadian authors will be asked to write the final story of the Embers.

“It’s an exciting time in the history of Girl Guides,” said Zelmanovits. “These girls will get a special and unique opportunity to contribute to our history in a very meaningful way.”

It Takes One Person To Make You Feel Like You Matter | Kyle Scheele Inspirational Speech | Goalcast
This Is How You Become the Best Version of Yourself in One Step | James Lawrence | Goalcast
This Year, Let Go Of The People Who Aren’t Ready To Love You
Beyond Dry January: 5 Benefits of Extending Your Break from Alcohol
Domino’s Employee Delivers a $12 Order – But the Unusual Tip He Received in Return Takes Him by Surprise