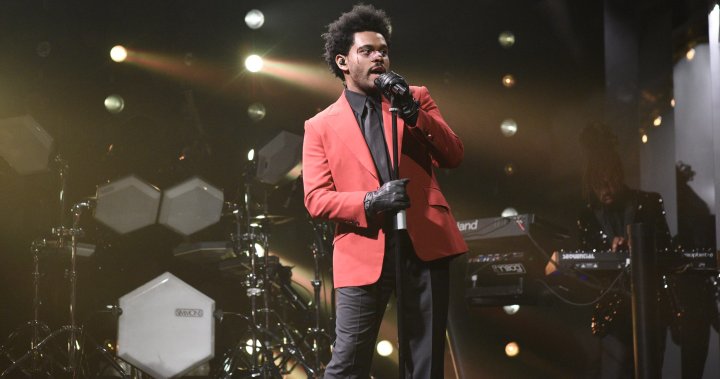 The Weeknd has been confirmed to perform during 2021’s Super Bowl LV halftime show.

The singer is set to be the first Canadian to perform at the event since Shania Twain took the stage alongside No Doubt and Sting back in 2003.

The show will take place at Raymond James Stadium in Tampa Bay on Sunday, Feb. 7, 2021.

Pepsi — the halftime show’s sponsor — along with the NFL, Roc Nation and the musician himself, all announced the news.

“We all grow up watching the world’s biggest acts playing the Super Bowl and one can only dream of being in that position. I’m humbled, honoured and ecstatic to be the centre of that infamous stage this year,” The Weeknd said in a press release.

“The Weeknd has introduced a sound all his own. His soulful uniqueness has defined a new generation of greatness in music and artistry,” said Roc Nation chief Jay-Z. “This is an extraordinary moment in time and the Pepsi Super Bowl LV Halftime Show is going to be an extraordinary experience with an extraordinary performer.”

“We are thrilled to have The Weeknd join us in Tampa Bay on the Pepsi Halftime Stage,” said Brian Rolapp, NFL Chief Media and Business Officer. “Halftime Show performances have a history of excellence and creativity and we look forward to seeing what he will bring to Super Bowl LV.”

When your talent is limitless, you belong on the world’s largest stage. @theweeknd #PepsiHalftime #SBLV @rocnation pic.twitter.com/xS31Vka9DH

Adam Harter, Senior Vice President, Sports, Media and Entertainment, PepsiCo, said, according to Variety: “We can’t wait to welcome multi-award winning artist The Weeknd to the Pepsi Super Bowl LV Halftime Show stage. In collaboration with the NFL and Roc Nation, we continue to reimagine what a Pepsi Halftime Show looks like with some of the biggest musicians in the world. We expect The Weeknd will continue to raise the bar, setting a new precedent both musically and visually for the most-watched performance of the year.”

The Weeknd follows a long line of singers to take to the Halftime Super Bowl stage. Jennifer Lopez and Shakira had the honours earlier this year, after the likes of Lady Gaga, Madonna, Janet Jackson, Justin Timberlake, Coldplay, U2, and many, many more performed.

This Year, Let Go Of The People Who Aren’t Ready To Love You
This Is What Self-Care Really Means, Because It’s Not All Salt Baths And Chocolate Cake
Louisiana Woman Gives Free Wigs to Children Suffering Hair Loss — Their Reactions Will Warm Your Heart
Beyond Dry January: 5 Benefits of Extending Your Break from Alcohol
Year of the Rabbit: Canada’s animal shelters urge not to adopt bunnies on a whim