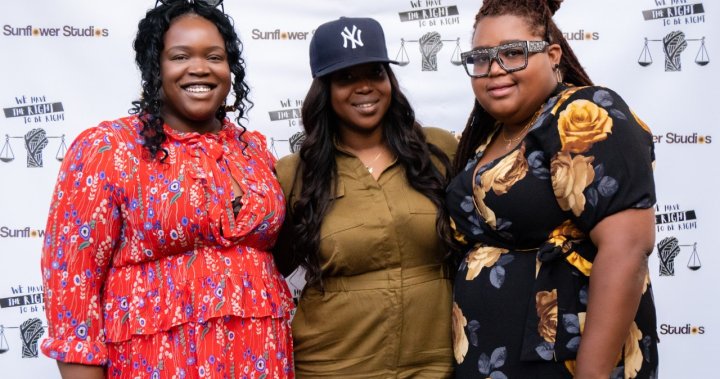 When Toronto director Kelly Fyffe-Marshall set out to make her short film, Black Bodies, in 2018, she did so as a way to channel her own trauma of being racially profiled while in California.

It happened when Fyffe-Marshall and her friends were checking out of an Airbnb.

“An elderly white lady saw us and decided to call the police for breaking and entering,” Fyffe-Marshall told Global News, “and we were surrounded by seven police and a helicopter.”

The film, which confronts the harsh realities of being Black in the 21st century, has been racking up accolades.

It was honoured at the 2020 Toronto International Film Festival (TIFF) and most recently beat out thousands to earn a spot as one of only six Canadians films at the 2021 Sundance Film Festival.

It’s no small feat for a four-minute film produced, notably, by an all-Black women-led team.

Fyffe-Marshall said that while the movie garnered a lot of attention south of the border, the vast majority of Canadian media remained silent.

So, she took to Twitter writing, “This is why we lose so many of our artists to the U.S.”

“Just frustrated that this all-Black team, especially after the year we had, with 2020, we weren’t hearing anything,” Fyffe-Marshall said. “So it was important for me to just use Twitter and my social media as a way to really speak for so many other artists that I know are feeling the exact same way.”

To her shock, the message caught the eye of her idol, Oscar-nominated filmmaker Ava DuVernay.

What followed was a shoutout by DuVernay to her 2.7 million followers. Only then did Canada take note, Fyffe-Marshall said, proving her point.

“Until I got the American co-sign, nobody cared. I’m sure if she hadn’t retweeted it, then I wouldn’t be in the media right now, you know, I wouldn’t be getting the recognition I’m getting,” said the 31-year-old.

Fyffe-Marshall’s epitomizes illustrates a long-standing issue within the Canadian industry about the way it supports, fosters and provides opportunities for its Black creators.

“White supremacy roots are deep, far and wide and touch everything,” she said. “We don’t have the same opportunities and therefore we don’t get the same rooms and we don’t get to elevate the same way.”

Very little data exists on Black creators both behind and on the screen in Canada. The statistics that do exist paint a trouble picture.

Racialized and Black communities make up about 22 per cent of the population in this country. But according to the Black Screen Office, in the history of television broadcasting, only five shows led by Black creatives have made it onto Canadian television.

“Think about all we’ve lost. Think about the stories that haven’t been told, think about the people with the talent that we haven’t seen… because of this patriarchal society that didn’t see our humanity, that didn’t believe that our stories mattered,” Jennifer Holness, an award-winning Canadian writer and producer, told Global News.

The 20-year veteran says the film industry in Canada has a long history of systemic racism, which is upheld by white gatekeepers, and has shut out Black Canadian creatives.

“We were told that if we wanted to get more funding, we should make a Canadian story. That’s systemic because they’re saying that a Black Canadian with Jamaican roots who wants to tell a story that envelops … a broader world, that is not a Canadian story,” said Holness.

It’s why Toronto-raised brothers and actors Stephan James and Shamier Anderson have stepped up to create opportunities they feel are lacking at home in Canada.

The two launched The Black Academy, a platform to foster and showcase Black Canadian talent in areas ranging from arts and culture to sports and science.

“We didn’t want to continuously be lost in this perpetual loop of Canada not recognizing and supporting their Black talent,” said James, who was nominated for a Golden Globe for his performance in the film Homecoming.

“There’s not enough governing bodies, infrastructures, places to celebrate Black excellence,” said Anderson, who is featured in Halle Berry’s directorial debut film Bruised’ “And The Black Academy is going to be that springboard for opportunities, mentoring, leadership. Teaching.”

Adding to the list, the brothers have announced a partnership with Insight Productions to create Canada’s first Black-focused award show.

The goal is to be a place where Black Canadians will not only see themselves recognized, but trained and hired as crew members for the event too. They are currently looking for applicants.

“If we want to be able to have our stories told on screens, we have to think about who’s authoring and empowering those people to be able to create content for us,” said the 27-year-old James.

According to the brothers, the much-needed financial backing for The Black Academy is still lacking. Outside of the Canada Media Fund, no other company has stepped up to pledge financial support.

But the formation of their organization is exciting creatives like Fyffe-Marshall who have been fighting to be seen.

Fyffe-Marshall adds that it’s a time of heightened awareness for racial equality, support from Canada is well overdue, and it’s time for the Canadian industry to step up, and instead of talking about equity, to make real and lasting change.

This Year, Let Go Of The People Who Aren’t Ready To Love You
The Walt Disney Company to mark 100th anniversary with new experiences
Haute couture goes ‘surreal’ and upside-down at Paris fashion show
Sweet Revenge: Woman Wins Lottery Jackpot After Husband Leaves Her for Best Friend
This Is How You Become the Best Version of Yourself in One Step | James Lawrence | Goalcast