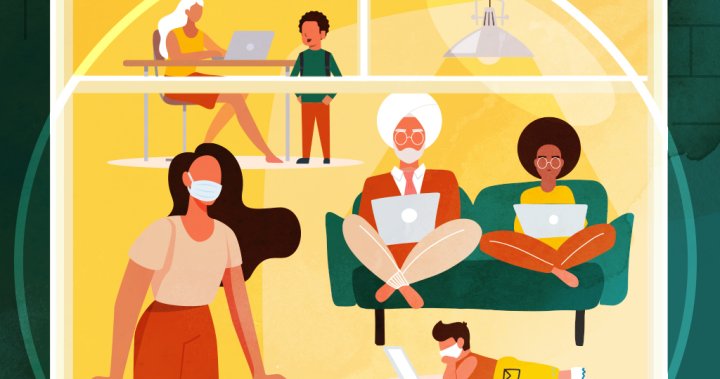 For 17 years, Butterfly GoPaul has focused on community development like housing and health care in Toronto’s Jane and Finch neighbourhoods.

As a worker on the front lines, she said something as simple as securing an affordable place to live is often a barrier families run into.

GoPaul said these inequities have been exacerbated by the COVID-19 pandemic.

“This has been in the works for years. It’s systemic. It’s chronic.”

For racialized communities, there have been a number of factors contributing to higher rates of COVID-19 in major cities in Canada, but experts said many of these factors existed prior to the pandemic. Vulnerabilities like living situations as well as lack of neighbourhood resources are often left out of the conversation.

Last year, Global News found Montreal’s more disadvantaged and multi-ethnic neighbourhoods were at a higher risk of COVID-19 due to tough financial situations or having a high-risk frontline jobs.

In Ottawa, data released by the city’s public health department last November revealed Black people made up 37 per cent of all cases since the start of the pandemic.

And in Toronto, recent data from Toronto Public Health found 79 per cent of COVID-19 cases in the city identified with a racialized group.

Dr. Kate Choi, acting director at Western University’s Centre for Research on Social Inequality, said factors like living arrangements and neighbourhood amenities are just as important to consider when discussing the prevention of COVID-19.

Choi said when it comes to multigenerational households, which are often overcrowded, there are a number of household members going to work or school.

“Because the individuals have different social milieus, it means that they have multiple points of exposure to COVID-19,” she said.

“And as a result, someone who’s living in a multigenerational household has a greater vulnerability to being exposed.”

READ MORE: ‘I was shocked:’ Brampton neighbourhood has higher COVID-19 positivity percentage than any other in GTA

“If we look at something like plumbing, we know that if you had bad plumbing within your home, that could mean inadequate access to clean water, which makes it difficult for household members to wash their hands,” she said.

Low or poor airflow and circulation as a result of inadequate housing may also contribute to people’s ability to stay home and can increase one’s risk to COVID-19, Choi said.

Living situations and other barriers

Back in December, Aïssata Hann recalls a day when she got really sick. She was worried about whether she had contracted COVID-19 and decided to get tested.

Hann, who lives with her parents and two younger brothers in a small downtown Toronto apartment, said because of the limited space, it was difficult for her to isolate from the rest of her family.

“I was basically locked in my room,” she said, “I didn’t even feel like I should go to the bathroom, which is like right across the hall from my room.”

For Hann, the biggest challenge throughout the pandemic has been the fear of catching COVID-19 as she and her parents all work essential jobs and her brothers attended class in person prior to schools being closed.

“They were both going to school. There were several times where we got emails from school being like, ‘Oh, another case positive,’” she said, adding that prior to the winter break, the school of one of her brothers closed because of COVID-19 cases.

“At work every day it’s just another person has the case. Another person tested positive. I’m pretty sure my parents also have to deal with the same thing.”

Similarly, when Anna-Kay Brown of Toronto caught COVID-19, she said it was difficult to isolate in her apartment with her husband and three children.

“I don’t have the luxury of most apartments having two bathrooms and my room is also a shared space (for) my husband and my youngest child,” she said.

For some, living with multiple family members, especially those who have language barriers, has put additional pressure on older siblings to take on more work.

Omar Khan is a community worker in Toronto who works with refugee newcomer families. For people in these heavily COVID-19 impacted neighbourhoods, he said there are often language barriers.

“What I’ve been seeing is a lot of older siblings who are in (post-secondary) or high school taking on a lot and then struggling in their own school because they’re doing so much to help their family,” said Khan.

4:24
Racism and inequality during a pandemic

Additionally, Khan added language barriers have lead to misinformation about COVID-19 and the vaccine on platforms like WhatsApp.

There has also been lots of material floating around on social media in the languages of families Khan works with.

“What happens with the youth, is they hear one thing from say, school or peers and another from their parents. Sometimes parents ask youth what they are hearing,” he said.

Overcrowded housing and fear of eviction

Beth Wilson, senior researcher at Social Planning Toronto (SPT), said a joint report by the organization, University of Calgary and York University from last fall demonstrated how multi-dimensional the housing crisis is in the city.

“(Overcrowded housing) is just one piece of it. Then you layer that on top of all of the other issues like people doing precarious work, not having protections, not having paid sick time, fearing they’ve lost jobs,” said Wilson.

“I work with a lot of residents who live in overcrowded housing, who are newcomers and don’t necessarily have formal citizenship status,” she said.

“Families are disproportionately impacted by COVID(-19) not only due to this overcrowding but as a direct result of the affordable housing crisis.”

Ponnambalam added the fear of eviction is common in these communities and that residents can spend more than 50 per cent of their income on rent.

Jane and Finch is one of the neighbourhoods in Toronto that is home to racialized, working class communities doing precarious work and this has put them at a higher risk of COVID-19, said Brown.

Brown, who has lived in the Jane and Finch community for more than 12 years and works as an advocate in the neighbourhood, said that one of the biggest barriers during the pandemic has been the lack of resources being allocated to communities like hers.

While there are organizations providing communities with resources like housing and food insecurity, Brown said the burden shouldn’t just be on grassroots groups that are typically underfunded.

How do we fix this?

According to Wilson, SPT recommended programs where people can isolate themselves if they are waiting for a COVID-19 test or have symptoms.

“One thing is we don’t hear a lot about the solutions. So are they working for people? Do people know about them? Are they full? Or are their spaces available?” Wilson said.

Ponnambalam said that it is also important for community agencies to work with resident leaders to communicate important information, especially in different languages, out to various neighbourhoods and buildings.

Communities are also tired of talking about these issues because they are in survival mode, GoPaul said.

What is needed is money from not just the city but all levels of governments to work towards new development in these communities, she adds, because there are so many layers like income and health, that there needs to be a full turning over of the system.

“I’m really tired of the word resilience. Because this is inhumane. What’s happening in a pandemic with folks that have been excluded in so many ways historically for years … there’s no money, no real dollars that really address what’s happening on the ground.”

Service Dog Stays at Hospital With His Owner 24/7 — While Nobody Else Was Allowed to Stay
If You’re Feeling Judged: One Thing You Need to Understand
Tough Times Don’t Last (Official Music Video) Fearless Motivation
Femcels: Inside the enigmatic subculture of involuntary celibate women
He Was Fatally Beaten by Memphis Police — Now People Around the World Are Sharing #SunsetsForTyre in His Honor