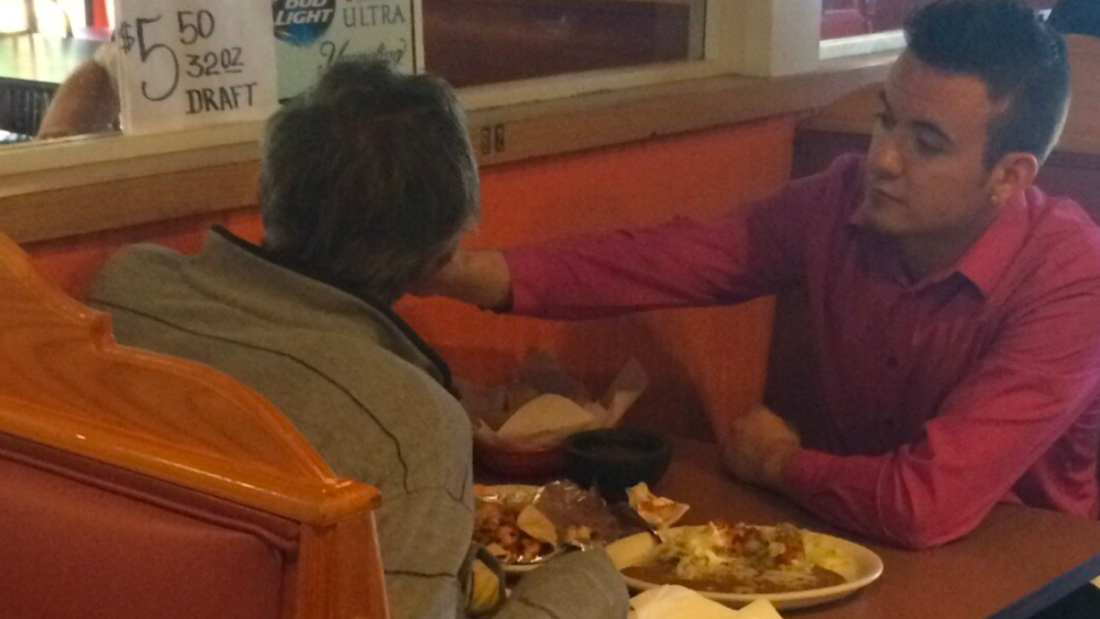 Alex Ruiz, 22, is a server at Cinco de Mayo Mexican Grill, in Georgia. When a disabled man walked in to place an order and asked for help with his meal, Ruiz obliged without any hesitation.

Ruiz sat across the booth from the man and fed him the whole meal of shrimp tacos. He also made small talk with the man asking him about his family, his life and if he needed a ride home.

“I Did What I Thought Was Right”

Reginald Widener, a Douglasville resident and regular customer of the restaurant, saw the entire scenario play out and was touched by Ruiz’s kindness. He took a picture of Ruiz feeding the man and posted it on the internet.

“So I’m at cinco de mayo and Alex (server) had a man come in with no hands. So Alex is now helping the man eat his lunch. This seriously hit me right in the soul. Still good ppl in the world.”  He said in the post.

From the picture, the way Ruiz conversed with the man felt like as if he knew him for a long time when in fact it was their first time meeting each other. There was no awkwardness or uneasiness between them during the entire time. It was comforting to watch them together.

RELATED: Electrician Fixes Struggling Couple’s Wiring in the Dead of Winter for Free—So They Make It Their Mission to Pay Back His Kindness

“I saw a man who needed help,” Ruiz said. “I did what I thought was right.”

Widener who had interacted with Ruiz on a daily basis was not entirely surprised by his actions. Ruiz always smiled and gave out positivity to everyone around him.  It made him happy when he helped others in need.

“He Deserves Every Good Thing in His Life, Bless This Man”

The restaurant was impressed by Ruiz and praised him. They reshared Widener’s post and that was when it went viral.

“Everyone at work was telling him what a great guy he was,” said waitress Crystal Figueroa.

The Internet instantly loved to see such kindness and showered blessings and love to Ruiz.

RELATED: Woman Has Only $10 to Her Name – Saved by Perfectly-Timed ’30-Day Kindness Challenge’

“That’s just something you don’t see. A person feeding a stranger.” Wrote one person

“I hope his other tables tipped this man very well too. He deserves every good thing in his life, bless this man. We need more people like him in this world,” wrote another.

Ruiz was surprised to see such reaction. He did not expect anything like it.

“I didn’t mean for it to cause a lot of attention… I just wanted to help,” he told.

It has been six months since Ruiz have moved to Georgia from Chicago. He has a son and he wishes to teach him what it means to be “loving”.

It is very hard to see kindness in a world that has shown itself to reflect mostly bitterness. Because of this, we tend to be more cautious and pessimistic in nature. People like Ruiz are those beautiful gems that help build our faith in kindness. They must be cherished and nurtured so that one day, kindness and compassion will no longer be a rarity.