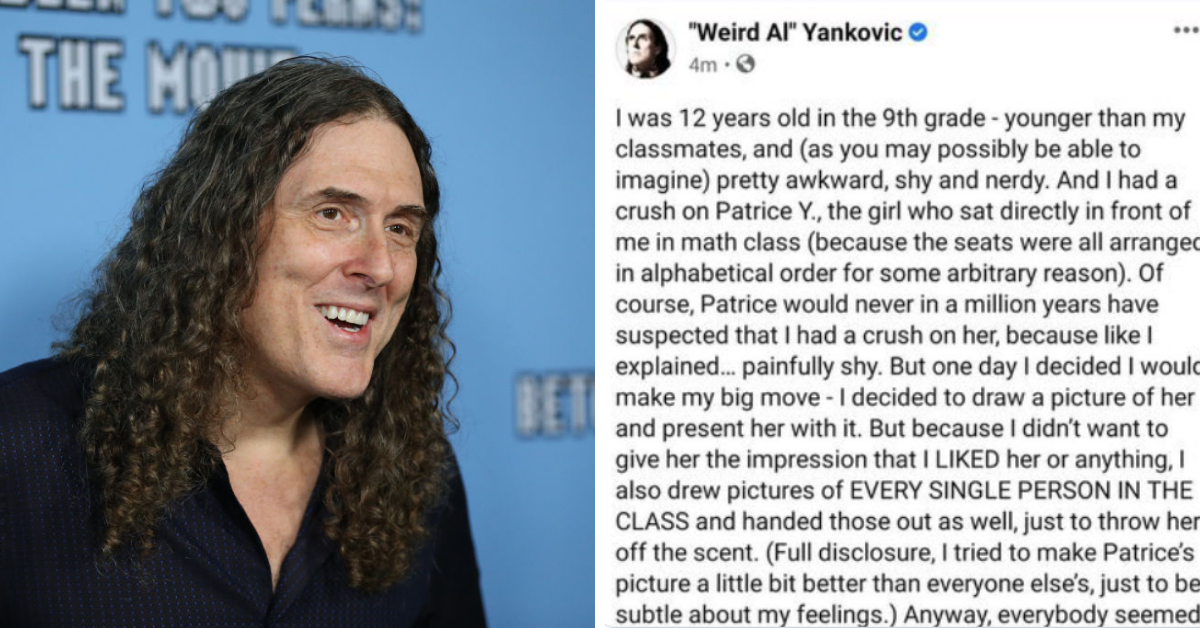 Musical funnyman ‘Weird Al’ Yankovic might have just won 2020 – and our hearts – with a cute story of high-school love that gives us all the feels.

Long before he was a four-time Grammy winner, Alfred Matthew Yankovic was a “pretty awkward, shy and nerdy” 9th grader.

Then, one day in math class, a girl with long hair and a friendly smile named Patrice Y sat directly in front of him. Alfred was smitten.

Not that the timid teen was worried about getting noticed.

Patrice would never in a million years have suspected that I had a crush on her, because like I explained… painfully shy

Yankovic decided to make his “big move:” He would draw a picture of his Mona Lisa and present it to her.

There was just one problem: Yankovic didn’t want Patrice Y to know his true feelings. And so, he came up with a “simple” solution: He drew pictures of every single person in class to “throw her off the scent”.

Although his pictures got rave reviews, Patrice Y never got a whiff of his true intentions.

She saved the picture

He’d hear nothing from Patrice Y after that year. That is, until recently — almost 50 years later.

Could it really be her?

Being slightly less shy now, Yankovic decided to DM her and ask. Incredibly enough, it was indeed his 9th-grade crush.

Overcome by curiosity, he had to know: Did she remember the picture he gave her?

Not only did she remember, but one minute later, it was also on Weird Al’s screen. “She had saved it all these years,” he recalls.

Looking at his work, it’s pretty clear even then that Yankovic had some serious talent.

It’s definitely amazing how Yankovic and his high-school crush improbably reconnected decades later. Most of those connections end at graduation.

However, what made this story magic is ‘Patrice Y’ keeping his picture after all those years. It turns out that she not only noticed him, but she also remembered his gesture.

Looking back on 2020, we’ve all had small moments of hope and love we can look back on. Maybe it was a word of encouragement, maybe it was helping a friend or a stranger. Maybe it was just a simple thank you from someone.

Which moments will you remember?

Oh, and in case you’re wondering, Yankovic has been married to his wife Suzanne for 19 years. They have a daughter, Nina, 17.

2020 was arguably a pretty sucky year overall, but there were some real moments of joy sprinkled in here and there – and for me, this was definitely one of them