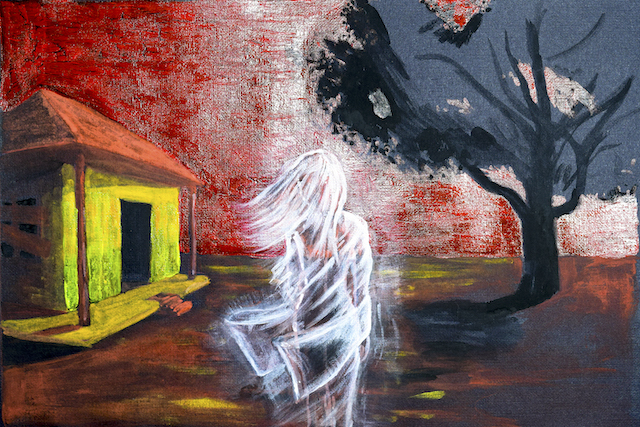 “You will survive, and you will find purpose in the chaos. Moving on doesn’t mean letting go.” ~Mary VanHaute

I was ten years old when I discovered the truth. He didn’t fall. He wasn’t pushed. It wasn’t an accident.

Suicide isn’t a concept easily explained to a six-year-old, much less her younger siblings, so I grew up believing that my father’s drowning was an unfortunate freak accident. It was “just one of those things,” the cruel way of the world, and there was nothing anyone could have done about it.

This explanation more than satisfied me and, other than a fear of open water and a slight pang of sadness whenever he was mentioned, I suffered no grievous trauma for the rest of my early childhood.

But at ten years old I learnt the truth—that it wasn’t some divine entity or ill-fated catastrophe that took him from me. He had, in fact, ripped himself from the earth and left everyone he loved behind. Left me behind.

Was it something I did?

That’s the first question I asked.

The idea that suicide was a simple cure for sadness became the first of many dangerous cognitive distortions I adopted. It would take no more than a dropped ice-cream cone or trivial friendship fall-out for me to declare my sadness overwhelming, to the point where, at the age of eleven, I drank a whole bottle of cough medicine in the belief that it would kill me.

As I grew into my teenage years, the possibility that I was the driving force behind my father’s suicide began to plague me, albeit subconsciously. I reasoned that the bullies at school hated me so, naturally, my father must have hated me too.

Maybe I wasn’t smart enough or polite enough. Maybe I was unlovable. Maybe everyone I loved would leave me eventually.

This pattern of thinking would slowly poison my mind, laying the foundations for what would later become borderline personality disorder. I suffered from intense fears of abandonment, codependency, emotional instability, and suicidal ideation, believing that I was an innately horrible person who drove people away.

I refused to talk about my problems and allowed them to fester, harboring so much anger, guilt, shame, and sadness that eventually it would erupt out of me. It was only in my mid-twenties that I realized just how deeply my father’s suicide had affected me and the course of my whole life.

I sought help and, slowly, I began to heal.

Coping with The Stigma

“Mental illness is nothing to be ashamed of, but stigma and bias shame us all.” ~Bill Clinton.

Selfishness, cowardice, and damnation are toxic convictions that permeate the topic of suicide, adding to the anger, guilt, shame, and isolation that survivors feel. Growing up, I hid the truth of how my father died under fear of judgment or ridicule, scared that the knowledge would not only tarnish his humanity, but paint me with the same black brush.

I still remember the words of a girl in high school, “Well, you shouldn’t feel sorry for people who do it, it was their choice after all.”

Understanding the intricacies of mental illness and just how destructively they can distort the mind allowed me to come to terms with my father’s death. I was able to accept that his suicide was born not out of selfish weakness, but from lengthy suffering and pain, carried out by a mind that was consumed by darkness and void of the ability to think rationally.

Letting Go of The Need for Answers

It is a question that only the person who committed suicide can answer—but they often leave us without any sense of understanding. In the absence of a detailed note or some definitive explanation we find ourselves trapped in an endless spiral of rumination, speculating, criticizing, and self-blaming, to no avail.

It becomes a grievance, a desperate yearning for closure that weighs heavily on our hearts. After all, not only did they leave us, but they left us in the dark.

It is completely natural to want an answer to the question of “why.” We feel as though an answer will provide closure, which in turn will ease our confusion, pain, and guilt. However, because there is usually no singular reason for a suicide attempt, we will always be left with questions that will go unanswered.

Fully accepting that I was never going to get the answers I craved freed me from the constant rumination of “why.”

To quote Jeffery Jackson, “Human nature subconsciously resists so strongly the idea that we cannot control all the events of our lives that we would rather fault ourselves for a tragic occurrence than accept our inability to prevent it.”

As survivors, we tend to magnify our contributing role to the suicide, tormenting ourselves with “what if’s,” as though the antidote to their pain lay in our pockets.

We feel guilty for not seeing the signs, even when there were no signs to see. We feel guilty for not being grateful enough or attentive enough, for not picking up the phone or pushing harder when they said, “I’m fine.” Even as a child I felt an overwhelming guilt, wondering whether I could have prevented my father’s suicide simply by saying please-and-thank-you more often than I had.

It wasn’t my fault. And it isn’t yours either.

The truth is that we cannot control the actions of others, nor can we foresee them. Sometimes there are warning signs, sometimes there are not, but it is an act that often defies prediction. It is likely that we did as much as we could with the limited knowledge we had at the time.

Healing takes acceptance, patience, self-exploration, and a lot of forgiveness as you navigate your way through a whirlwind of emotions. However, there is a light at the end of the tunnel of grief. Although we may never fully move on from the suicide of a loved one, in time we will realize that they were so much more than the way in which they died.

To quote Darcie Sims, “May love be what you remember most.”

Kia Hartford is a writer and mental health blogger committed to raising awareness and reducing the stigma surrounding mental health issues. Over on her blog Beyond The Blues, she shares her lived experiences of borderline personality disorder, depression, anxiety, PTSD and substance abuse. You can also find her on Pinterest.

The Single Greatest Mistake A Man Can Make | Jordan Peterson
‘Gen Z yellow’: Next ‘it’ colour or marketing ploy?
How to Make Things Better When It Seems Like Everything Is Going Wrong
It Takes One Person To Make You Feel Like You Matter | Kyle Scheele Inspirational Speech | Goalcast
This Is How You Become the Best Version of Yourself in One Step | James Lawrence | Goalcast