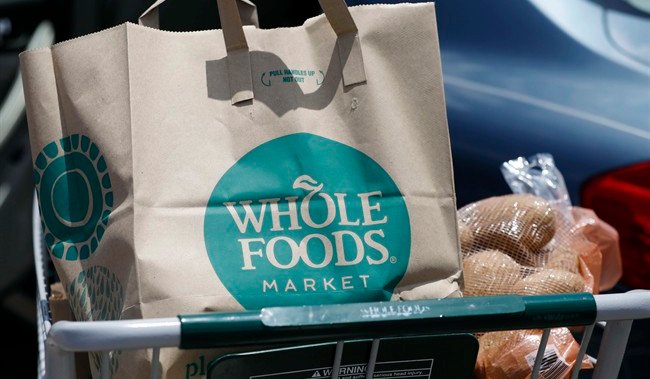 Whole Foods is doubling down on a controversial policy banning Canadian employees from wearing the poppy, which is a sign of remembrance and respect for fallen soldiers.

Prime Minister Justin Trudeau weighed in on Friday, saying the company had made a “silly mistake that I hope they will correct quickly,” and that Veterans Affairs Minister Lawrence MacAulay was expressing that directly to them to try to get the policy changed.

Members of the House of Commons unanimously condemned the ban on Friday, adopting a motion “to condemn Whole Foods and its owner Jeff Bezos for banning its employees from wearing poppies on their uniform, and demand that the policy be reversed immediately.”

They also adopted another motion unanimously inviting John Mackey, CEO of Whole Foods, to appear before the House of Commons veterans affairs committee within the next two weeks.

The order means that Mackey, an American, either must appear voluntarily or else run the risk that the committee will issue a formal summons to be delivered by bailiff next time he sets foot in Canada.

News of the ban was first reported by CBC News, citing an employee from an Ottawa Whole Foods location who was quoted saying their supervisor compared wearing the poppy to “supporting a cause.”

The poppy, however, is non-political.

It is worn during the lead up to Remembrance Day across the country and by Canadians from all backgrounds, faiths and positions on the political spectrum as a symbol of respect.

Whole Foods repeatedly refused to answer questions about its reason for the ban on Friday.

Instead, it provided a statement that answered none of the questions sent by Global News asking for the specific reason behind the ban, citing instead its “dress code policy.”

“Whole Foods Market honours the men and women who have and continue to bravely serve their country. We support Remembrance Day in all of our Canadian stores by observing a moment of silence on November 11th and by donating to the Legion’s Poppy Campaign,” said a company spokesperson.

“With the exception of those items required by law, our dress code policy prohibits any additions to our standard uniform.”

However, the decision puts the company — owned by American conglomerate Amazon — at odds with other Canadian grocery chains and broad public support for the wearing of poppies.

A spokesperson for Sobeys confirmed employees at the grocery chain are welcome to wear poppies, with the only exception being those who are actively preparing food because of the pin.

“Our teammates proudly wear poppies in our stores. Honouring our veterans is a part of our rich history as a Canadian retailer,” she said in an email. “Our store teammates put together incredible in-store displays to honour Remembrance Day and work with the local legions to sell poppies and raise funds.”

Weatherbee added the company views the matter as a simple question of what is right.

“Wearing a poppy is just the right thing to do.”

Employees at Farm Boy, owned by the same parent company as Sobeys, are also permitted to wear their poppies while working, said a spokesperson for that chain.

Catherine Thomas, spokesperson for the Loblaw Ltd. firm that owns chains including Loblaws and Shoppers Drug Mart, said their employees can also wear the poppy.

“We absolutely allow our colleagues across the country to wear poppies, and in fact, encourage them to do so,” Thomas said in an email.

“We have supported our veterans through poppy sales for years, and understanding the challenges they may face this year specifically, we are making a donation to the Royal Canadian Legion.”

“Wake up, Whole Foods,” Rae tweeted. “In Canada we show respect to veterans and the thousands who made the ultimate sacrifice by wearing the poppy.”

O’Toole accused the American chain of “trying to be Woke Foods” while Ford called the move “disgusting and disgraceful,” calling for an immediate apology and reversal of the decision.

“No self-respecting Canadian would shop in a place run by Americans who tell us they don’t respect our poppy. Don’t give these creeps a dime of your money friends.”

This is absolutely unacceptable — the poppy is an important symbol of remembrance, and it’s more important than ever that everyone support the @RoyalCdnLegion’s Poppy Campaign this year. #CanadaRemembers https://t.co/bpSRcDP7zD

The sacrifice of Canadians in the past provides the freedom for a US grocery chain to be stupid today. Let’s tell Whole Foods to stop trying to be Woke Foods. The poppy is not a cause, it is a sign of respect. https://t.co/LFg63PiB9Y

It’s disgusting and disgraceful that @WholeFoods has banned poppies for their employees. We will always stand with our veterans. Whole Foods should apologize and immediately reverse this decision. Everyone should wear a poppy #lestweforget.

We will introduce legislation that prohibits any employer from banning their staff from wearing a poppy during Remembrance Week. #lestweforget #onpoli

This is outrageous. Wake up, Whole Foods. In Canada we show respect to veterans and those thousands who made the ultimate sacrifice by wearing a poppy. #PoppyAppeal https://t.co/ndeyKTQiSu

Looks like it’s going to be a very bleak week for sales at @WholeFoodsPR
No self-respecting Canadian would shop in a place run by Americans who tell us they don’t respect the poppy.
Don’t give these creeps a dime of your money friends.

Sweet Revenge: Woman Wins Lottery Jackpot After Husband Leaves Her for Best Friend
How to Make Things Better When It Seems Like Everything Is Going Wrong
How to be the Smartest in the Room | Ibram Kendi | Goalcast
Parents issue warning after teen dies from inhaling aerosol deodorant
This Is How You Become the Best Version of Yourself in One Step | James Lawrence | Goalcast