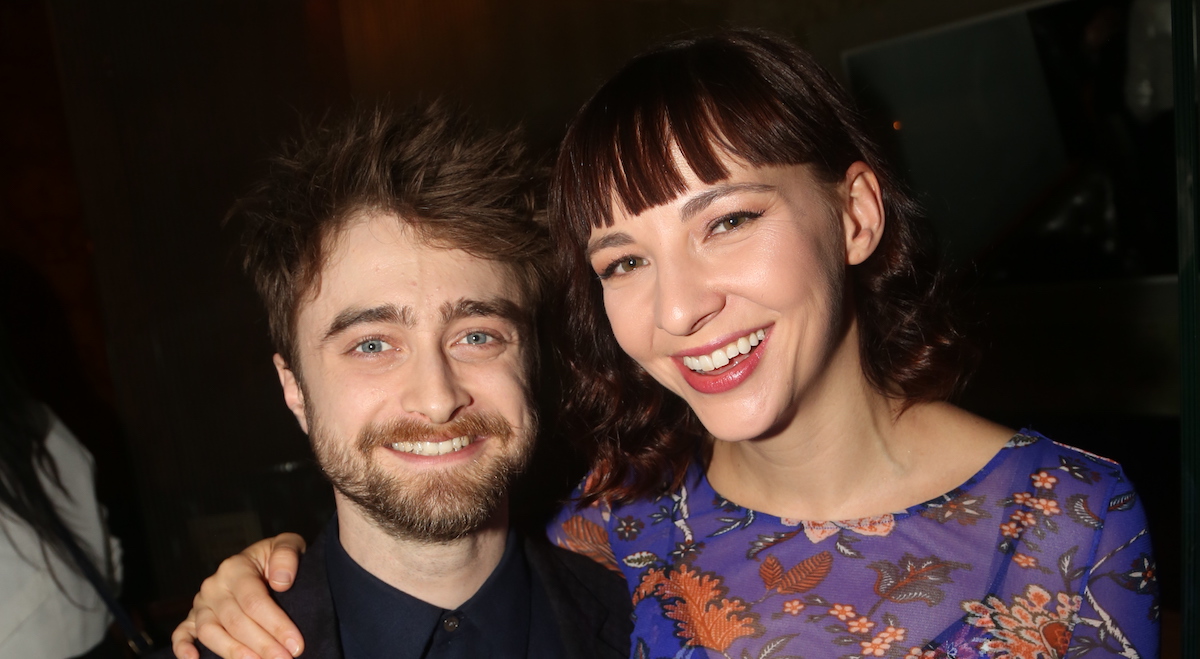 Daniel Radcliffe and Erin Darke have been dating for eight years and although they don’t shy away from praising one another publicly, they don’t often make headlines with their relationship — and that’s exactly how they like it.

Darke, a Michigan native who you may recognize from the big screen (think Oscar-nominated Still Alice) or small screen (think The Marvelous Mrs. Maisel), told Vulture in 2020 she’s “okay with [the media’s] lack of interest in us. We’re boring to them,” she proclaimed, pointing out that “90% of the paparazzi photos of us are getting coffee […] or going to the grocery store.” She joked, “You can only sell so many photos of two people waiting for an Uber!”

It’s this normalcy that makes Daniel Radcliffe and Erin Darke’s union so refreshing. As is their unshakeable friendship and their ability to find joy in the most mundane tasks, as long as they’re doing them together.

Here’s what we can learn from Daniel Radcliffe and Erin Darke’s sweet romance:

Mixing personal with professional can often spell disaster, but in the case of Daniel Radcliffe and Erin Darke, it was work that brought them together. And it’s work that provided them with a shared foundation that’s resulted in relationship success.

The two actors met on the set of 2013’s Kill Your Darlings and, as the Harry Potter alum told Playboy in 2015, he was pretty much drawn to Darke instantly. In the film, their characters flirt and engage in a NSFW scene in a library and, as he told the outlet, “There’s no acting going on — not from my end, anyway. There’s a moment when she makes me laugh, and I’m laughing as me and not as my character,” he revealed.

She was incredibly funny and smart. I knew I was in trouble.

Radcliffe spoke more about the movie that introduced him to the love of his life with PeopleTV in 2019, saying, “Our characters are meeting and flirting with each other, so there is this kind of sweet record of us just meeting for the first time and flirting.” He also joked that “it’ll be a hell of a story to tell our kids one day because of what our characters do with each other.”

But acting didn’t just bring them together, it also offered them a strong base on which to build their relationship. “One of the first things we bonded over was how much we really love what we do and there’s something that’s really beautiful and really lovely about being with someone who just innately understands that about you,” Darke told People in 2018.

And even though they haven’t worked together since, they still continue to collaborate — just in a slightly different way. “He helps me make self-tapes sometimes,” she continued, adding, “He’s a great reader, by the way. We’re both incredibly supportive of the other person’s career.”

Labeling relationships early on can be detrimental

Daniel Radcliffe doesn’t believe in labeling relationships or sorting them into different boxes. Rather, he prefers to remain open to possibilities when it comes to meaningful connections, which is a good thing because his romance with Darke grew out of friendship.

“I don’t think you can ever control how anything starts,” he told Us Weekly, explaining that “the whole modern idea of ‘friend zone’ and all that stuff — that’s a word I don’t like very much.” Noting that you should never close yourself off by holding onto a preconceived notion of what someone means to you.

It’s not like I seek out that way of meeting people or think I have to be their friend first, but I think it’s often a very natural thing to progress from into a relationship.

These days, after eight years together, Radcliffe and Darke’s friendship is as strong as ever. “I think that’s the kind of relationship I always aspire to have with someone I’m in a relationship with — you want that person to be your best friend,” Radcliffe told the magazine, confirming, “In the case of Erin, we definitely are.”

They’re not afraid to be themselves

When you find the right partner, not only will they be your biggest supporter and closest friend, but they’ll also embrace all sides of your personality. For Daniel Radcliffe and Erin Darke that meant geeking out together and loving it.

“I grew up doing lots of things where I thought, ‘This is super nerdy. I’ll never be able to do this around a girl,’” Radcliffe admitted during a 2020 interview. Then he met Darke and she got it. As he explained:

That’s the wonderful thing about the moment you find the relationship you’re meant to be in. It’s like, ‘Oh, I can do all of that stuff and you don’t mind. And you actually think it’s fun, too. This is fantastic!’

Adding that his girlfriend “comes from a big family of card players,” Radcliffe revealed that Darke also had plenty of nerdy traditions to share with him. “She’s introduced me to a lot of card games. We play a lot of board games, too. I feel lucky I’ve found somebody I can turn to and say, ‘Do you want to play Scrabble?’ And for her to say, ‘Sure.’ It’s super nerdy,” he said.

Daniel Radcliffe and Erin Darke are happiest when they’re together

Actors are often on the go and, as Radcliffe told the Radio Times, “There’s always an element of long distance with two actors in a relationship,” which is why he’s “very grateful for Skype and FaceTime.”

It’s no wonder then that when he and Darke are in the same place, they spend as much time together as possible. Offering a glimpse into their daily life, he shared, “We play a lot of games […] we watch a lot of TV. We go and see movies. We hang out and eat. We read.”

While the pandemic wreaked havoc on a number of celebrity couples, it only brought them closer together. Deciding to quarantine in New York in Radcliffe’s apartment, the actor told Vulture they “have a little Post-It on the wall that we’re keeping a tally on. There was something about it that just made me laugh, immediately treating it like a prison film,” he joked, adding, “We’re both in the situation where we’ve never been more grateful not to have a kid, or more annoyed that we don’t have a dog. But generally speaking, compared to a lot of people, we are very, very much okay.”

And that’s because they genuinely are happiest when they’re together. As Radcliffe told People in 2019, Darke makes everything better, including the most boring of tasks. “A day on my own with nothing to do is kind of like, I’ll go crazy by the end of that day,” he said. “But doing the most mundane stuff, like going shopping, with her, it’s just a joy. It’s fun. I never thought I would find going to the supermarket a genuinely fun experience,” he laughed, adding that you know you’ve found The One when you realize that “if they weren’t there, you could be doing the exact same thing and it would suck, but them being there just makes it awesome.”

There’s a lot to be said for how a person makes you feel and the right partner will always make you feel at ease. Daniel Radcliffe and Erin Darke show us how a winning union allows both parties to be 100% themselves and how finding someone who brightens up all aspects of your day (even grocery shopping) is the ultimate sign of relationship success.

Looking for love? 44% U.S. adults use dating apps to find long-term partners: study
Why I Didn’t Trust Myself to Make Decisions (and What If It’s All Okay?)
The Most Heartfelt Speech About Being Your Best | Gian Paul Gonzalez | Goalcast
Podcast: What to know about “novelty hunting.”
How I Stopped Feeling Embarrassed and Ashamed of Being Single